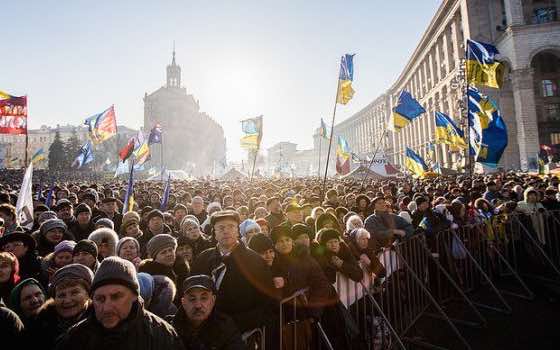 We are living in an era of revolutions gone awry. Powerful protests have proven effective at toppling statues of leaders but helpless at tearing out their foundations and building something better.

This latter step is the daunting challenge facing Ukraine today after parliamentary elections in late October.

If this feels like déjà vu, that's because it is.

Ten years ago, Ukraine was in a similar position -- hoping to reform itself after kicking the very same man, Viktor Yanukovych, out of the presidency -- in the so-called Orange revolution of 2004. Yet after a few years of disappointing "reformist" government, Ukraine found itself back where it started. To break the cycle, the newly elected officials will need to learn from the past and devolve power from themselves and their corporate allies.

Yet it's a particularly challenging time to do so: Ukraine's economy is disintegrating. Its foreign debt is growing as its currency's value shrinks. Russia continues to embed itself in Crimea as it pushes separatists forth over Ukraine's industrial heartland. And winter accentuates the need to keep energy flowing from Ukraine's hostile neighbor in the east.

Ukraine's new government thus has to find a way to overcome these immediate challenges while undergoing fundamental reform. Now that its new parliament -- the Verkhovna Rada -- has been officially minted with its ceremonial first brawl, it is time to ask: Are the new leaders up to the task?

Pro-Western parties won a strong majority of seats in the elections -- a predictable result, given that the country's separatist pro-Russian strongholds did not participate -- and commenced the painfully slow process of forming a government.

At the helm of this coalition are President Petro Poroshenko and Prime Minister Arsiniy Yatsenyuk -- the leaders of the election's two best-performing parties (with over 20 percent of the vote each).

Both Poroshenko and Yatsenyuk support the consolidation and modernization of Ukraine's splintered military and reform of the country's corrupt and convoluted judiciary system. Outside observers have expressed optimism that the two men possess the administrative capability to see these reforms through.

But there have also been causes for concern. Poroshenko, for instance -- a billionaire who made his fortune selling sweets -- is a business behemoth in a country whose post-Soviet economic and political development has been stunted by the outsized influence of a handful of oligarchs. Yatsenyuk, for his part, has already served in Ukraine's previous failed and corrupt governments. Ambitious and sensing opportunity, the two men often appear preoccupied with scrapping for pieces of each other's power.

Their political rivalry was expected to play out in the selection of ministers, at the expense of laying the foundation for change. For the most part, this has not been the case. Much of the recently installed cabinet -- notable for the presence of those born outside Ukraine -- is avowedly committed to quickly making the tough decisions necessary to yank Ukraine from its rut. The American-born, Harvard-educated Finance Minister Natalie Jaresko, for example, seeks to slash waste in the budget before Christmas.

Poroshenko insisted on confirming all of the members together, however, and this allowed into office officials with a less clear sense of purpose and more incriminating pasts. Other potential red flags include the issuance of a coalition platform that calls for change but hardly explains how to achieve it, as well as the creation of a Ministry of Information to combat propaganda from Russia -- and potentially criticism from within Ukraine's own borders.

Even if Poroshenko and Yatsenyuk cooperate to reinvigorate Ukraine's rotten institutions, they won't be able to go it alone.

In order to gather the seats necessary to push constitutional amendments through the legislature -- 300 out of 450 -- the eponymous Petro Poroshenko Bloc and Yatsenyuk's People's Front formed a potentially shaky coalition with three Western-leaning parties.

Two of those parties -- the Fatherland Party, which won 19 seats, and the Radical Party, which took 22 -- are wild cards, owing to their strong dependence on the direction their leaders take them.

Heading the Fatherland Party is Yulia Tymoshenko, who was appointed prime minister after Yanukovych was first kicked from the podium in 2004, imprisoned upon Yanukovych's return, and released earlier this year as events came full circle. She then rushed to the Maidan protests to establish herself as a champion of the revolution. But with the dismal results of the last "revolution" firmly entrenched in Ukrainians' memories, she hardly won anything at all: Her party surpassed the vote threshold to earn a presence in parliament by less than a percentage point.

While ideologically not so distant from Poroshenko, Tymoshenko has already turned down the chance to compromise with the president. "They thought I'd step aside to let an oligarch take over," she said of Poroshenko's previous offer to let Tymoshenko become the transitional government's prime minister in exchange for her bowing out of the presidential race. "Never!" Tymoshenko is renowned for her competitive, populist, and opportunistic tendencies -- and no doubt slighted by her fall from prominence -- and so expecting her to tow the coalition line through potentially unpopular reforms is certainly a leap of faith.

The Radical Party's leader, Oleh Lyashko, bears many of the same qualities. Described by Foreign Policy as "a practiced populist with no ideology," he once ran for office with Tymoshenko's party before splitting off to boost his own political celebrity. Trumpeting his tougher-than-Poroshenko stances against oligarchs, Russian-backed separatists, and non-Ukrainian cheese , Lyashko too might be tempted to abandon the coalition if its popularity should stumble.

Another coalition member, the reformist Samopomich party -- translated as either "Self-Help" or "Self-Reliance" -- won 33 seats running as the most direct heir to the Maidan protests. Its numbers swelled as activists-cum-politicians grew disillusioned with the traditional political tack of running alongside more experienced figures -- in this case established politicians looking to survive the revolution by claiming to tout its values. Upon entering the governing coalition, however, the party's opposition to politics as usual will surely be tested.

Among the strongest unifiers for these five parties is their goal to loosen the grasp of a handful of oligarchs on Ukraine's politics. However, the influence of these oligarchs remains in the new government -- and may not be going anywhere soon.

Take Yevhen Bakulin, for example. The former director of Ukraine's largest gas supplier -- the notoriously poorly managed Naftogaz -- Bakulin drew the ire of anti-corruption activists for his suspiciously grandiose dwelling and was detained by police for questioning on corruption charges earlier this year. Winning big in eastern Ukraine as a candidate of the Opposition Party, he also now has a seat in parliament.

According to Ukrainian constitution, members of parliament are protected from prosecution.

A few weeks before the election, Poroshenko's government issued a lustration law aimed at changing this, so that politicians tainted by corruption from the Yanukovych years would be barred from office . The law's effect, however, has been merely to make the process of indictment and removal complicated and difficult. Potentially corrupt politicians will continue heading into office (albeit at the risk of literally being thrown in the trash, as frustrated citizens did to one) and Bakulin will continue returning home to his mansion.

Bakulin's link to Naftogaz illustrates why the continued influence of oligarchs will likely hamper the country's drive to reform. Naftogaz offers heavily subsidized gas to Ukrainian households while lining its owners' pockets with cash from government coffers. It has largely failed to function as an independent and sustainable energy provider, opting to rely on the inflow of gas from Russia instead of building up its own infrastructure. Now Ukraine is beholden to the Kremlin's politically charged decisions on how much gas to supply and how much to hike its cost.

Significant reform of Naftogaz is necessary to secure Ukraine's security, but any attempt to overhaul Naftogaz's practices will face fierce opposition from its politically connected stakeholders.

The Opposition Party exceeded expectations in the elections is led by the former Minister of Fuel and Energy under Yatsenyuk's government, Yuriy Boyko.

Disputing the elections as laden with fraud and decrying the selection of ministers as a tyrannical power grab, the Opposition Party is the only bloc within parliament to reject Western-inspired reforms, seeing Ukraine's interests as aligning more closely with those of Russia. Many of its members in fact voted for the so-called "dictatorial laws" that authorized a violent crackdown on the Maidan protesters.

With 40 seats -- a far cry from those won by Yanukovych's Party of Regions before the revolution -- the party poses a small threat to the legislative priorities of the new coalition. But it won those seats with significant support from a rump southeast, which had been Yanukovych's base. With the party coming out on top in five eastern districts, its success drives home that there is a great number of Ukrainians who strongly associate with Russia, even outside of Crimea and separatist-controlled regions.

That means that Western-leaning reforms will not solve Ukraine's deep divisions. More than turning to face Europe or Russia, the government in Kiev needs to look out its own windows. Engaging the entire population is vital. While this may involve measures that will likely be seen as concessions to Moscow -- like the decentralization of power, greater regional autonomy, and protections for Russian speakers -- they will be necessary to create the kind of strong state that can free itself from the Kremlin's machinations.

Ukraine faces an almost impossible task: carefully balancing its internal contradictions while initiating monumental reforms. Neglecting either will lead to a dysfunctional state.

This is when revolutions go awry. Ensuring that this one doesn't will require a balancing act of Western governments' own: to encourage deep reforms within the Ukrainian government but to be patient and generous in allowing them to be feasibly carried out; to foster the democratic process even as it produces challenging results; and to help Ukraine overcome its immediate concerns without jeopardizing its long-term health.

Understanding the unique make-up of the Ukrainian government is an important step to proceed with the requisite care. Revolutions might start with shots fired, but they end -- for better or for worse -- with bills passed.