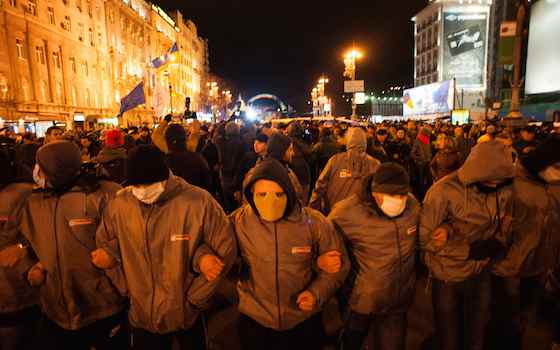 The United States has a recent history of going to war for dubious reasons promoted by interested groups, for which afterwards Americans are sorry. I have in mind the controversial Tonkin Gulf incident that was used to justify large-scale U.S. intervention in Vietnam. The search for non-existent mass destruction weapons that prompted the invasion of Iraq. Now we have a threat of war with Russia to save an American-sponsored coup d'état in Ukraine.

This seems the work of officials closely associated with the Project for a New American Century. This organization, since 1997, has assembled virtually all of the neo-conservative foreign policy specialists, publicists and commentators who have lost their places in or around the U.S. government since the United States' military and political fiascos in Iraq and Afghanistan.

It seems odd that they have found that home in the Obama administration, customarily attacked as liberal. In foreign policy, it is not. Its liberal members are mostly from the liberal-interventionist school, anxious to go to war to save people from tyranny and despotism -- good causes, but not always prudent, and less often successful.

The Project for a New American Century was founded by William Kristol and Robert Kagan, well-known right-wing publicists. A consultation of its lists of officers and senior members shows that they now make up probably the most important and influential policy bloc in the American foreign policy debate. Virtually all of the leading figures, and often members of their families, hold prominent positions in government, the media, and amidst the thicket of conservative think-tanks in Washington.

Now they have given us a crisis with Russia, via an American-incited coup d'état in Ukraine that has run aground. It would appear (because of clownish security failures the night of the coup itself) to have been run out of the , directed by Mr. Kagan's wife, Assistant Secretary of State for these regions. (Why not the CIA, which at least is competent in such affairs, which Mrs. Kagan -- otherwise Victoria Neuland -- demonstrably is not. Did the CIA decline so foolish an adventure?)

Both Secretary Nuland (whose presence naturally implicates President Obama, her chief, making him look reckless) and Vladimir Putin have overreached in the Ukraine confrontation, for which the rest of us may be grateful. It may not end in a war.

Mr. Putin, in his post-Crimean mode, has prudently calmed his own citizens, ambiguously redeployed his army, and again invites negotiations (which Washington and Kiev still spurn).

The Project members and their uneasy European allies (who probably believed they were dealing with the serious people in the American government) intended to launch a pro-Western Ukrainian government with a long-term attachment, or dependence, upon the , and firm links to the United States and .

Why did they want to do this? Particularly since the initial Ukrainian "Orange Revolution" in 2004-2005, sponsored by the United States, disintegrated into discredit, corruption, and potentially lethal struggle among its leading figures and their successors, producing no benefit for either the U.S. or Europe. It only led to the new and more reckless and dangerous episode we find ourselves in today.

It is hard to imagine how Barack Obama's radical-conservative advisors convinced him to throw the United States once more into the battle to acquire Ukraine for Team West, at a moment when success would humiliate Vladimir Putin at the moment when he had carried off a triumphal Winter Olympics, and when the Russian president was being unprecedentedly cooperative with the U.S. in searching for solutions to the Iran nuclear issue, and to the appearance of chemical weapons in Syria's civil war.

Vladimir Putin's reply to the Kiev coup was, of course, to seize Crimea. No one at the Project for a New American Century, or in Ms. Nuland's office, seems to have thought of that. Then the Russian-speaking eastern Ukrainians themselves took a decisive hand in what was going on by seizing control of towns in their own region, and staging last Sunday's improvised referenda calling for annexation by Russia. Kiev's paramilitary forces were sent to attack the dissidents, killing some, and fueling the desire of the Russian-speakers for revenge.

Mr. Putin politely thanked them for the invitation to annex the part of Ukraine they occupied, but declined, at least for the present.

The Kiev officials denounced the referenda, called their voters and organizers "terrorists," as did all of the American officials and most commentators, thereby contributing to the alienation of the infuriated Russian-speakers -- 70 percent of whom, in the eastern regions, want Ukraine to stay united, according to a Pew poll released this month. Nobody in Washington seemed to know that.

President Putin has had presented to him, by the western Ukrainians and the Americans and Europeans, a tempting opportunity to neutralize, if not partition, Ukraine by accepting the allegiance of its increasingly alienated Russian-speaking minority.

The Ukrainian problem is not linguistic or territorial so much as it is historical and social, driven on the one hand by the sufferings inflicted by the famine deliberately inflicted by the Bolsheviks after the Russian Revolution, and on the other by the cruelties of the Nazi occupation during the war. Yet it remains one country and one culture.

The European governments are trying to negotiate a settlement.

As one French commentator has wisely written: Ukraine needs two "F's" -- a federal system of self-governing provinces, and "Finlandization." The last thing it needs is domination by either the New Russia or the partisans of a New American Century.