Counterterrorism in the NHS: The 'Prevent' Strategy Takes to the Clinic 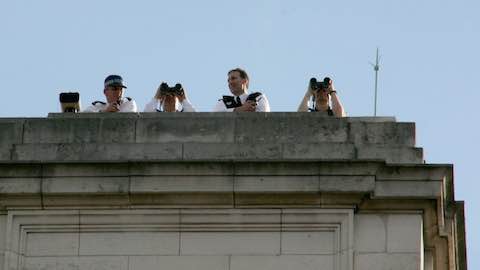 Counterterrorism in the NHS: The 'Prevent' Strategy Takes to the Clinic

A policy which ignores academic research, criminalises belief, and builds an extensive surveillance and monitoring system is itself an extremist and violent endeavour.

The PREVENT Strategy has constituted one quarter of the UK's counter-terrorism strategy, 'CONTEST', since 2004 and outlines the responsibilities and roles of government and partner agencies in the detection and suppression of 'radicalisation'. It has been the subject of heated debate throughout this time, with academic research pointing to the policy's inability to predict who becomes a terrorist, and the discriminatory results of its use within community policing and counterterrorism surveillance.

Since the publication of the 'Prevent Duty' in July 2015, much of the reflection on UK counter-radicalisation policy has examined the new statutory duty for schools and higher education providers to 'prevent radicalisation'. Education providers in the UK are now required by law to proactively monitor their students for signs of 'radicalisation', assess student's 'vulnerability' to extremism, promote 'British values', and to have frameworks in place whereby students of concern are referred to the local authority's 'Channel program' for 'support'. In response to the government's enforcement of the Prevent Duty in education, the National Union of Teachers (NUT) has called for the strategy to be scrapped -- arguing that it causes 'suspicion in the classroom and confusion in the staffroom'. Delegates at the NUT's annual conference reported that the Prevent training given to teachers is 'crude and often involves loads of stereotypes', while the duty to monitor student's political opinions turns teachers into 'the secret service of the public sector'. In practice the Prevent Duty has led to overzealous counterterrorism monitoring in both schools and university campuses, with British Asian students being removed from class and questioned by authorities for discussing 'ecoterrorism' in a French lesson and reading texts on terrorism (listed on their course readings lists) in a university library.

It is important to question and criticise the performance of counterterrorism surveillance in schools and on university campuses. With large numbers of academics arguing that 'radicalisation' fails as an explanation for terrorism, and that counter-radicalisation policies are counter-productive (and unethical) when it comes to engaging communities, the UK risks being drawn further into an illiberal and un-thought-out surveillance regime unless it listens to the growing disquiet of education providers and the public.

'Prevent' in the Clinic

But, in focusing only upon the context of education, we miss the quiet deployment of Prevent in other sectors -- in equally problematic forms. In 2010 the UK coalition government of the Conservatives and the Liberal Democrat party took office and immediately commissioned a review of the Prevent Strategy. In 2011, the Prevent Review was published as the UK's new approach to counter-radicalisation -- within which the NHS became a key sector for the identification and suppression of 'extremism'. Optometrists, dentists, doctors and nurses were made responsible for identification of 'vulnerability to extremism' and 'radicalisation' within their patients.

The 2011 Prevent Review has placed requirements on all NHS bodies to train staff to spot 'radicalisation' signs and to utilise the reporting mechanisms provided for alerting security agencies. So when you visit the doctor, dentist, hospital, optometrist or even the dementia care ward, your healthcare professional is 'trained' in the detection of terrorism. Why is the NHS thought to be a relevant partner in counterterrorism? The importance of the NHS is figured by the government in relation to their unparalleled contact with, and thus access to, the public. The Home Office clearly frames the access of the NHS to huge sections of the public as an advantage for the deployment of counterterrorism:

1.3 million NHS workers have contact with over 315,000 patients daily and some 700,000 workers in private and voluntary healthcare organisations see many thousands more […] Given the very high numbers of people who come into contact with health professionals in this country, the sector is a critical partner in Prevent. There are clearly many opportunities for doctors, nurses and other staff to help protect people from radicalisation. The key challenge is to ensure that healthcare workers can identify the signs that someone is vulnerable to radicalisation, interpret those signs correctly and access the relevant support (Home Office 2011: 83-5).

What are the problems with this? Firstly, there are serious ethical questions to be asked about tasking healthcare professionals with counterterrorism duties and with the surveilling of the sick. People go to their GP or their hospital when they are at their most vulnerable -- so how can it be appropriate to assess them for signs of political 'extremism' when they are in pain? Furthermore, the imposition of counter-radicalisation training and duties upon healthcare professionals poses a serious challenge to the doctor-patient relationship – which should be based upon assessing symptoms and healing the sick, not the misguided monitoring of political beliefs.

So how does the government justify this extension of Prevent into the daily practices of the NHS? By reclassifying the meaning of counterterrorism as a 'safeguarding' endeavour. Instead of discussing terrorism and militancy as a strategic choice made to further a political campaign, the UK Prevent strategy has led the way in redefining political violence in pathological terms. The narrative of 'radicalisation' frames terrorism as the result of social 'vulnerabilities' (like expulsion from school, or incarceration) that leave one susceptible to the influence of extreme ideologies. In this narrative, one can be 'at risk' of becoming a terrorist -- as if ideology were somehow contagious, and one could be infected with the proclivity for terrorism.

As a result, counter-radicalisation measures target people assumed to be 'vulnerable' to extremism. In the 2011 Prevent Review, this proactive targeting of the population was explicitly designated as 'safeguarding'. What does it mean to safeguard against terrorism? 'Safeguarding against terrorism' refers to the identification of ideological abuse which prefigures terrorism. 'Radicalisation', in the PREVENT review, has been reframed as a form of abuse that vulnerable children and adults can suffer, much like the domestic and sexual abuse which healthcare professionals are already required to notice and act upon within their 'safeguarding' protocols. Political violence has now been categorised as a behaviour which results from 'ideological abuse'. For example, the Prevent Review states that:

Preventing someone from becoming a terrorist or from supporting terrorism is substantially comparable to safeguarding in other areas, including child abuse or domestic violence […] The Department of Health has also supported the review of the 'No Secrets' guidance on safeguarding [vulnerable] adults. This will embed the principles of Prevent within existing processes for safeguarding vulnerable adults and enable healthcare workers across the country to understand the parallels between Prevent and existing support and intervention processes (Home Office 2011: 83-4).

This reductionist framing of political violence as the result of 'vulnerability' and 'abuse' is at odds with most serious studies of terrorism, which instead highlight that terrorism is a strategic choice of movements which face challenges in achieving their political goals, alongside competition to maintain their levels of popular support. The UK Prevent Strategy is thus compromising the integrity of the health service in order to appear tough on terrorism, when really there is no evidence to support the framing of 'radicalisation' as the result of 'extremist ideology' and community segregation (as David Cameron often opines).

The Departure from Liberalism

A second problem with the integration of Prevent into the NHS is the government's explicit endorsement of mass surveillance. Previously, in British counterterrorism, religious and racial characteristics were used to generate a profile of possible militant communities: the 'suspect communities' of the counterterrorist imagination. The consequences of this discriminatory profiling have been brutally unethical throughout both the eras of the Northern Irish 'troubles' and the early years of the contemporary Prevent strategy. Religious and racial profiling should have no place in a liberal state. However, neither should the population-wide surveillance of political views which we currently see enacted in both the NHS and the education system. The UK has explicitly rolled out a population-wide program of ideological surveillance under the umbrella of counter-radicalisation -- making it mandatory for teachers, nurses and doctors to report dissenting citizens to the police. This is more akin to the totalitarian surveillance undertaken by the Stasi, or the Nazi Party, than to liberal values of free speech and tolerance.

Philosophies of political liberalism endorse the right to free speech and freedom of opinion (except where such speech constitutes a hate crime). John Stuart Mill, Voltaire and Erasmus have all endorsed the political and ethical necessity of free speech: these philosophers emphasised that unpopular and unpalatable views, such as those now labelled 'extremist', were not outside these provisions of liberalism for protecting free speech -- rather it was essential that illiberal, radical views be heard in public. Ideas and ideology, no matter how offensive, were not considered dangerous contaminants which could brainwash vulnerable citizens; instead classical liberalism recommended that they be heard and debated. The suppression of extreme, unpalatable views was considered unhealthy for society.

Counter-radicalisation, however, has extended the designation of terrorist criminality from acts (such as conspiracy and violent attacks) to the voicing of radical opinions. The criminalisation of speech within counter-radicalisation discourse and policies marks a significant departure from the philosophy of liberalism. It occurs because the radicalisation discourse has constructed a false trajectory between radical ideas and radical violence -- enabling the roll-out of a population-wide surveillance of the political views of the sick (through the NHS), the incarcerated, and the young (through education).

It becomes the responsibility of everyone concerned with social justice to remind the UK Government that radical political thought is protected within liberal philosophy, does not lead to violence, and that the Prevent Strategy could itself fall foul of the 'countering extremism doctrine' -- whereby 'British values' of liberalism and tolerance are held up as a standard against which to determine 'extremism'. A policy which ignores academic research, criminalises political belief, and builds an extensive surveillance and monitoring system through health and education is itself an extremist and violent endeavour.

"Counterterrorism in the NHS: The 'Prevent' Strategy Takes to the Clinic"