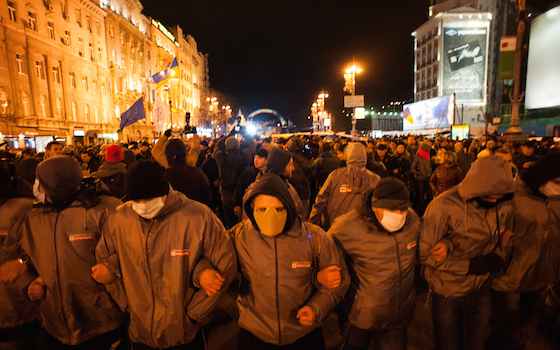 During the Cold War, the Western allies kept relative peace by committing to intervene militarily against overt violations of the national borders set at the end of World War II. In the current crisis in Ukraine, President Obama's straightforward acknowledgment that there is no "military solution" will no doubt come as an affront to hard-liners at home.

The American president made that flat assertion Wednesday in his speech in Brussels. "Now is not the time for bluster," he said. "The situation in Ukraine, like crises in many parts of the world, does not have easy answers nor a military solution. But at this moment, we must meet the challenge to our ideals -- to our very international order -- with strength and conviction."

It was in this temperate way that Obama justified his open pivot away from the threat of a shooting war over Ukraine's fate, to the less frightening imposition of economic and financial sanctions against Russia for its clear violation of post-World War II guarantees of international borders and national sovereignty.

It was also a candid recognition of military and political reality in a situation in which U.S armed force against the annexation of Crimea would have been both impractical and highly unpopular with the American public, which is fed up with foreign wars in which U.S. security is not directly in jeopardy.

In fact, in a remarkably defensive rationale involving the 2003 invasion of Iraq, which Obama himself once labeled "a dumb war" and opposed, he argued that it was in no way comparable to Vladimir Putin's Crimean land grab.

Obama noted that "even in Iraq, America sought to work within the international system. We did not clam or annex Iraq's territory. We did not grab its resources for our own gain. Instead, we ended our war and left Iraq to its people and a fully sovereign Iraqi state that could make decisions about its own future."

He dismissed as "absurd to suggest, as a steady drumbeat of Russian voices do, that America is somehow conspiring with fascists inside of Ukraine or failing to respect the Russian people." He cited his grandfather's service in World War II and paid tribute to "the unimaginable sacrifices made by the Russian people" in it.

Obama cited also America's efforts to bring Russia into the peaceful international community, arguing that "America, and the world and Europe, has an interest in a strong and responsible Russia, not a weak one." But, he added, "that does not mean Russia can run roughshod over its neighbors." In the end, he said, "on the fundamental principle that is at stake here, the ability of nations and peoples to make their own choices, there can be no turning back."

But having pointedly taken a military solution off the table, and relying on the persuasive power of the sanctions imposed or to be intensified, Obama is inviting more political fire at home from Republicans in and out of as a paper tiger. The approach, however, is fully in keeping with posture as president in rejecting the quick trigger of his predecessor, George W. Bush.

Obama in Belgium had just finished a tour of the Flanders battlefields of the two World Wars, and he spoke of the European solidarity that came out of them at such high cost. He urged the not to waiver in its support of the latest sanctions against Russia, while recognizing that force of arms was not in the cards to achieve a reversal of Putin's seizure of Crimea.

He insisted also that Ukraine was not being abandoned, that "this is not another old war that we're entering." He pointedly said that while that country is not a member of , it will be defended, and "so long as we remain united the Russian people will recognize that they cannot achieve security, prosperity and that status they seek through brute force."

It's not the Russian people Obama has to deal with right now, though, it's Putin, who seems to have other ideas. Yet Obama is right to use the non-lethal weapons at hand to challenge the Russian dictator's resolve, and hope they'll work.