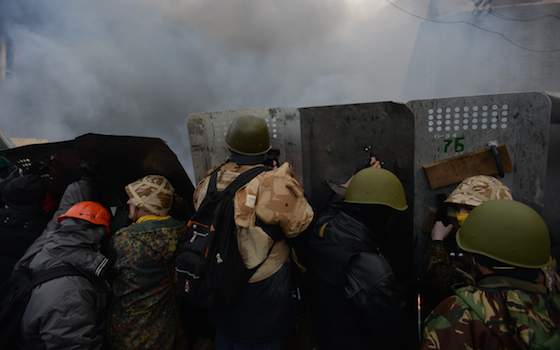 The report that protesters have declared two eastern Ukraine cities to be independent republics questions President Obama's assurance that there is no "military solution" to the crisis that began with Russian President Vladmir Putin's land grab of Crimea.

"If Russia moves into eastern Ukraine, either overtly or covertly," press secretary Jay Carney said Monday, "this would be a very serious escalation." But what does that mean? A spokesperson said only that such a move "would result in additional costs" to Moscow.

The comment indicated the administration will hew to economic and financial sanctions on Russian powerful business and banking figures, referred by Obama as Putin's "cronies," to dissuade him from any such tension-raising actions. But the pinch so far has not seemed to yield tangible results.

Secretary of State John Kerry in a phone conversation with Russian Foreign Minister Sergei Lavrov expressed concern about the reports. Lavrov was said to have warned the Kiev government of "the need to respect the aspirations of the residents of southeastern Ukraine and the inadmissibility of the use of force" against the local protesters.

All this has transpired amid continuing speculation of Moscow meddling in eastern Ukraine border regions. Russian or unidentified uniformed troops have been sighted there, allegedly carrying out military training exercises. Psychologically at least, such talk keeps alive recollections of the Nazi seizures in Austria and Czechoslovakia leading up to World War II.

In both those cases, Hitler cited the allegiance of ethnic Germans as justification, just as Putin did in his takeover of Crimea as a former part of the collapsed Soviet Union. Although Ukraine is not a member, Obama implied in his recent speech in Brussels that Ukraine would be defended, presumably by increased support of the new Kiev regime against any escalation of territorial intrusions.

He said then: "Of course, Ukraine is not a member of , in part because of its close and complex history with Russia. Nor will Russia be dislodged from Crimea or deterred from further escalation. But with time, so long as we remain united, the Russian people will recognize that they cannot achieve security, prosperity and the status that they seek through brute force. And that's why, throughout this crisis, we will combine our substantial pressure on Russia with an open door for diplomacy."

He went on: "I believe that for both Ukraine and Russia, a stable peace will come through de-escalcation -- direct dialogue between Russia and the government of Ukraine and the international community; monitors who can ensure that the rights of all Ukrainians are protected; a process of constitutional reform within Ukraine; and free and fair elections this spring."

That optimistic outlook, however, depends on the avoidance of intentional or unintentional circumstances on the ground that are always possible in the heat of misconduct or miscalculation. The assassination of Archduke Franz Ferdinand of Austria-Hungary in Sarajevo in 1914 kicked off World War I, an incalculable human tragedy which in turn sowed the seeds of World War II.

What may look now as controllable mischief-making by Putin, who seems to flirting with putting back together the pieces of the Soviet Union, could disintegrate into localized armed exchanges, further escalation and mobilization of indeterminate consequences .

At a minimum, Obama would find himself under political fire as incredibly naive toward Putin's intentions, and not only from those who would cite the Hitler analogy and comparison with Neville Chamberlain and the Munich Pact of 1938.

In 2001, then President George W. Bush famously observed that he had looked Putin in the eye and "found him to be straightforward and trustworthy" and that he "was able to get a sense of his soul." But five years later, after another meeting, Bush said of him: "He's not well informed. It's like arguing with an eighth-grader with his facts wrong."

As for Obama, he once remarked that Putin has "one foot in the old way of doing business." Perhaps he was only half right. In any event, Americans can only hope Obama has done a more perceptive job of reading his menacing adversary, and that his own optimism has some realistic basis in this worrisome crisis.