Can Ukraine Gnaw Its Way out of Trouble? 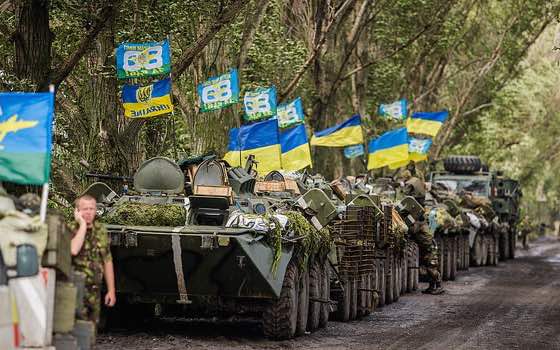 Can Ukraine Gnaw Its Way out of Trouble?

If Ukraine wants to move closer to the West, it will probably have to submit to the knife.

Animals caught in a trap will often chew off a limb to escape.

Even the occasional human being has resorted to this nightmare option, as the hiker Aron Ralston did when a boulder pinned his arm in a remote area of Utah wilderness. He'd run out of food, water, and time. What he did have was a utility knife. You can imagine the rest (or you can see it graphically rendered in the movie 127 Hours).

Ukraine is not a wild animal or an unlucky hiker. It's not located in a remote part of the world. Indeed, its central location has contributed to its misfortune. Ukraine is trapped by its geography, caught between a suspicious East and an opportunistic West.

And, like Aron Ralston, it is running out of time and options.

The last year has been a cruel one for Ukraine. The street protests that successfully ousted the country's corrupt leader one year ago set off a chain reaction that led to a confrontation with Russia, a terrible civil war, and the loss of more than 5,000 lives. Last week, negotiators hammered out a truce of sorts, and on Sunday a very uneasy ceasefire settled over much of the rebellious eastern part of the country. Whether this ceasefire or some future one proves durable, Ukraine must eventually make some very difficult decisions concerning its future.

Above all, it must figure out a way of exiting the steel trap that has clamped down on its nether regions. The Crimean peninsula has already been sliced off. Should Ukraine sever another one of its own limbs in order to survive?

Negotiators sat down in the Belarusian capital of Minsk last week to stop the war in Ukraine. They were under a lot of pressure. The EU had readied another series of sanctions against Russia. More critically, the United States was on the verge of sending lethal aid to the Ukrainian government, a move that European leaders like Germany's Angela Merkel resolutely opposed.

After 16 hours of coffee and Belarusian dairy products, the negotiators hammered out a compromise. This ceasefire was supposed to go into effect last Sunday. But virtually none of the terms has been honored.

For one thing, fighting never stopped. The conflict continued to rage around the disputed town of Debaltseve, which Russian President Vladimir Putin insisted should surrender to the rebels but backed down after Merkel threatened to walk out of the Minsk deliberations. The rebels, however, decided to change the facts on the ground by continuing to fight over the key transportation hub and forcing a Ukrainian army retreat. Other areas have also reported continued fighting.

Heavy weapons, meanwhile, were to be withdrawn two days after the ceasefire went into effect, but that didn't happen either. There was also disagreement over the treatment of the top rebel leaders, with the government in Kiev arguing that the amnesty in the agreement didn't apply to rebel leaders who engaged in “crimes against humanity.”

Russia, meanwhile, never admitted to being party to the conflict. The agreement doesn't address Crimea. And the status of the breakaway regions in the east remained in that hazy grey area between autonomy and independence.

Negotiators speak of the “ripeness” of a conflict for mediation. Talk about euphemisms. What they really mean is that the combatants have pummeled themselves so thoroughly, the tide of blood has risen so high, and the contested territory has shrunk in size so embarrassingly that a ceasefire becomes the only viable alternative to eternal stalemate.

The Korean War lasted for three years, but it was only the first year that witnessed a huge swing in military fortunes. The last two years were meat-grinding battles over the same narrow patch of ground. Only when both sides gave up on the illusion of repeating their earlier successful surges across the length of the peninsula did an armistice become possible.

In Ukraine, the rebels still believe that they can secure more territory for their self-proclaimed republics. And the government in Kiev still believes it can suppress the rebellion to the degree necessary to preserve the territorial integrity of the country. Recent history — East Timor, Kosovo, South Sudan — would seem to favor the rebels. Like Serbia, Ukraine faces the prospect of leaving behind a portion of its former self in order to escape the trap of war.

But the experience of Ukraine's neighbors offers another scenario that is not quite independence and not quite territorial integrity. Call it the “ghost limb” option.

The Region of Ghost Limbs

The collapse of the Soviet Union generated a string of conflicts along the periphery of Russia and even inside Russia itself. These were not, for the most part, ideological battles. They concerned ethnicity and the control of territory. Armenia and Azerbaijan clashed over the enclave of Nagorno-Karabakh. The civil war in Tajikistan pitted Garmis and Parmiris against Kulyabis. Chechens took on Moscow in an effort to create an independent Chechnya.

For Georgia, civil war came even before the Soviet Union officially collapsed.

Under the leadership of uber-nationalist Zviad Gamsakhurdia, the Georgian government turned on the enclave of South Ossetia, which had the temerity to protest the abolition of its autonomy in late 1990.

South Ossetia, Gamsakhurdia argued, “should be chopped up, they should be burned out with a red-hot iron from the Georgian nation, these traitors and venal people.” In 1991, the Georgian military attacked South Ossetia. A truce eventually ended the fighting in 1992. But Mikheil Saakashvili, who took over as Georgia's president in 2004, revived Gamsakhurdia's approach and attempted to solve the problem militarily, once again unsuccessfully.

The situation in Georgia is further complicated by the status of Abkhazia, which also enjoyed a measure of autonomy during the Soviet era. A month after the Georgians and the South Ossetians signed a ceasefire brokered by Russia, Abkhazia declared independence. After a year of fighting, Georgia and Abkhazia signed a ceasefire agreement, again brokered by Russia. But this one fell apart, and the war continued.

In 2008, Georgia and Russia came to blows in what has been called the first European war of the 21st century. The fighting lasted less than a week, and Russia overpowered its weaker neighbor. Moscow acted in large part to prevent Georgia from joining NATO, though its actions will likely prove only temporarily effective.

Immediately after this short war, Russia recognized the independence of both South Ossetia and Abkhazia. Not many other countries followed suit — three to be precise: Venezuela, Nicaragua, and Nauru. Not surprisingly, South Ossetia and Abkhazia also recognize each other. Since both countries border Russia, the Georgian government fears that because independence has not proven internationally viable, the two enclaves will opt instead for annexation to Russia.

At least South Ossetia and Abkhazia have four international supporters. Transnistria, the breakaway section of Moldova, remains entirely unrecognized. Nor does it border Russia, its patron. The narrow strip of land lies along the southwestern edge of Ukraine. It too endured a war — between 1992 and 1993 — and a plurality of the inhabitants speaks Russian. In a 2006 referendum, 97 percent of the population of Transnistria favored joining the Russian federation. Approximately 1,200 Russian troops are stationed in Transnistria.

Both Moldova and Georgia maintain their claims over these regions. But they are not fully functioning limbs, for they cannot be controlled from Tbilisi or Chisinau. They are, in other words, ghost limbs. The Georgians and Moldovans still believe in the existence of these limbs. But when they look down, all they see is a border of stitches where the amputation took place.

The government in Kiev could rightly challenge these analogies. It did not pledge to extirpate the ethnic Russians of eastern Ukraine, as Gamsakhurdia did to the South Ossetians. It did not force a language reform on Russian speakers as the Moldovans did on Transnistria.

What Ukraine did do, however, was entertain the possibility of shifting westward: joining the EU and even, eventually, NATO.

This became the nightmare scenario for Russia, and far outweighed Putin's disparagement of the leaders in Kiev as “fascists” and “putschists.” After all, the war with Georgia was effectively Russia's signal to NATO of its line in the sand. Ukraine threatened to go over the line. Although its concerns about NATO encroachment are understandable, Russia's response — to provide firepower for a handful of separatists and Russian mercenaries — was unacceptable.

Ukraine might have gotten its hopes up when Congress started pushing the issue of sending lethal aid. But that's as far as Washington will go, and it might not go even that far, given the Obama administration's ambivalence. If Russia were to intervene in a NATO member state such as Lithuania or Latvia, it would be a different story, given NATO collective security guarantees. But Putin has already written off the Baltics. It's the wavering states he wants to control at a distance.

Stephen Walt recently argued in Foreign Policy against arming Kiev by claiming that the “deterrence model” didn't apply to Vladimir Putin. The Russian leader, in other words, is “not greedy, seeking some sort of personal glory, or ideologically driven to expand.” Rather, his aggressive policy is “motivated primarily by fear or insecurity.” As such, Russia won't be deterred by a reciprocal aggressive action, which will only increase its feelings of insecurity and create a spiral of escalation.

I agree with Walt that adding arms to the conflict will only lead to more escalation and push the “ripeness” for mediation further into the future. At the same time, however, I suspect that Putin is not acting purely out of insecurity. He doesn't harbor an ambition to resurrect the Soviet Union. But he does aspire to create a more powerful sphere of influence around Russian borders. That aspiration doesn't require annexation. Transnistria is not likely to become part of Russia any time soon. But it does complicate Moldova's aspirations to join the West.

For Ukraine, this may well mean that it will have to tolerate a level of ambiguity in its eastern realms that most other countries would not accept. The statelets of Donetsk and Luhansk are no more viable than South Ossetia or Transnistria. But war didn't suppress those earlier independence struggles. It took Georgia and Moldova some time before they were willing to accept amputation.

If Ukraine wants to move on with its aspirations to move closer to the West, it will probably have to submit to the knife as well. Who knows: after many years of international isolation, lukewarm Russian support, and economic stagnation, the ghost limbs might themselves appeal for reattachment.

This is not fair, of course. Russia has been playing a dirty game. But no one ever said that geopolitics is fair. The situation that befell Aron Ralston wasn't fair either. But sometimes you have to do what's necessary to survive, even if it means cutting away what you hold dear.

"Can Ukraine Gnaw Its Way out of Trouble?"