Ukraine and the Failure of the Responsibility to Protect Norm 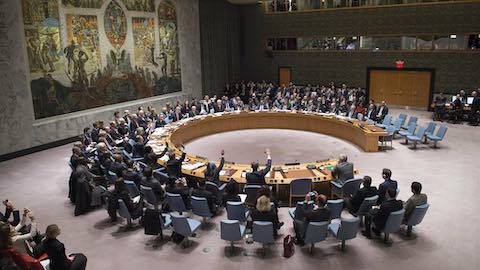 The United Nations has lost its legitimacy to prevent wars of aggression that underlie the very foundation of its existence.

As Russia's aggression threatens the human rights of millions of Ukrainian civilians caught in the crossfire of war, concerns have arisen about the Responsibility to Protect (R2P) in Ukraine. R2P emerged as an international norm in response to the failure to prevent mass atrocities in Rwanda and the former Yugoslavia in the 1990s. It seeks to ensure the United Nations never again fails to halt mass atrocities such as genocide, ethnic cleansing, war crimes, and crimes against humanity. While Russia's actions violate the Geneva Convention on war crimes, the UN's inability to protect populations at risk underscores the failure of the R2P doctrine. Unlike Slobodan Milošević, who was indicted for atrocities committed in Bosnia and Herzegovina, Kosovo and Croatia between 1991--1999, Russia's membership of the UN Security Council means it can veto any action against its interest. In that vein, the United Nations has lost its legitimacy.

Since the genocides in Rwanda, Bosnia, and Kosovo in the 1990s, the international community has debated two incompatible principles of the UN system -- sovereign equality and human rights. The former upholds the doctrine of state sovereignty as sacrosanct when dealing with domestic affairs. This principle underpins the equality of all states in international relations in exercising exclusive rights over their domestic territories without external interference. The latter argues that individual rights are inalienable and transcend sovereign territoriality. Thus, international intervention is justified to protect civilians at risk. Given colonialism's experience in developing countries, many states have opposed external intervention on the argument that it contravenes state sovereignty. The challenge for the United Nations has been whether to uphold the sanctity of state sovereignty in the wake of mass atrocity crimes in a particular state or override state sovereignty to protect populations at risk.

NATO's intervention in Kosovo in 1999 generated controversy amongst UN Security Council members, who criticized the action as violating the norm of sovereignty. In reaction, the former UN Secretary-General Kofi Annan approached the General Assembly to seek answers to questions about the incompatibility between sovereignty and human rights and how the United Nations should respond to situations involving gross and systematic human rights violations. Canada's response to this normative challenge inspired the creation of the International Commission for Intervention and State Sovereignty (ICISS) in 2001 to help the United Nations find common ground between the incompatibility between sovereignty and human rights, culminating in a report entitled the Responsibility to Protect.

Meanwhile, Russia, one of the permanent members of the United Nations Security Council founded on the need to uphold state sovereignty, has violated the very principle it swore to uphold by invading a sovereign nation and violating the human rights of its population.

The responsibility to protect populations at risk became increasingly necessary in Ukraine when horrific scenes involving the execution of civilians unfolded in Bucha, a suburb near the Ukrainian capital, Kyiv, with corpses strewn on the streets and many more buried in mass graves. According to NATO Secretary-General Jens Stoltenberg, the massacre in Bucha was "brutality against civilians" the world has not seen in Europe for decades. The fundamental question this humanitarian challenge poses is whose obligation it is to protect Ukrainian populations at risk, where the state has exhausted its capacity. Equally important is whether military assistance to Ukraine to countervail Russia's aggression is consistent with the R2P norm.

As international condemnation of Russia's atrocities grows it calls to question the importance of invoking the R2P norm to protect civilians. However, as James Pattison argued, there is a lack of clarity on which actor should assume the responsibility to protect civilians and whether this responsibility should fall on the UN, NATO, or a regional actor. This theoretical challenge invokes critical concerns about the UN commitment to the human rights of civilians in situations where a world power invades its neighbor intent on transforming its domestic sovereignty, leading to war crimes. Although the adoption of R2P as a normative principle constituted a solemn commitment to preventing human rights atrocities by state leaders, the liberal interventionist values that form the conceptual foundation for R2P are fraught with contradictions. These contradictions underpin the liberal creed of sovereign equality and the best ways of protecting civilians caught in the crossfire of war.

Although the United States and its European allies have increased sanctions against Russia amid a global outcry over war crimes, analysts have debated the possibility of a coalition of NATO and US forces declaring a no-fly zone over Ukraine to deter Russia's aggression. However, this proposal seems unrealistic as President Biden had stated unequivocally that the United States has no intention of engaging in a military confrontation with Russia. Numerous countries and regional organizations have equally responded with targeted sanctions and other punitive economic measures. Many multinational corporations have ceased operations in Russia, while several countries have closed their airspace to Russian airlines. Nevertheless, this effort has proven less successful in stopping Russian forces from committing more atrocities. Instead, Putin has threatened a "lightning-fast" response against Western nations interfering with Russia's assault on Ukraine, including cutting off natural gas supplies to NATO countries.

Russian forces continue to perpetrate war crimes and crimes against humanity by bombarding towns and cities in eastern, central, and southern Ukraine with indiscriminate explosive weapons, causing a massive humanitarian crisis. The United Nations has confirmed more than 1,480 civilian deaths, emphasizing that the actual number of civilian casualties is much higher. A report by the International Organization for Migration revealed an estimated 7.1 million internally displaced persons within Ukraine as of May 2022. Given the magnitude of death and destruction, with millions of civilians lacking access to water, medication, electricity, food, and shelter, the United Nations remains far from the objective envisaged in 2005, putting its credibility at stake.

The ninth report of the United Nations Secretary-General on R2P highlights the importance of strengthening accountability for preventing mass atrocity crimes. While accountability frames the legitimacy of the UN system in responding to atrocious crimes, the will to mobilize collective action is lacking. The R2P norm has suffered a political setback due to the deliberate reluctance of the UN Security Council to bring it to practical reality by enforcing the authority entrusted to it by the UN Charter to exercise the use of force to protect populations at risk. Therefore, Russia's invasion of Ukraine threatens to widen the gap between the political commitment expressed by the United Nations to protect populations at risk and the reality of civilians caught in the crossfire of war. This failure reveals ethical and practical challenges in global governance in situations where the sanctity of state sovereignty is accorded greater priority over appeals for intervention for human protection.

While Russia's atrocities in Ukraine violate international humanitarian law, it is incumbent on the United Nations Security Council to override state sovereignty and mobilize a multilateral coalition of western and non-western nations to protect human rights.

Obasesam Okoi is Assistant Professor of Justice and Peace Studies at the University of St. Thomas and Associate Editor of the African Security Journal. His research focuses on the linkages between the environment, conflict, and peacebuilding. His work has appeared in Conflict Resolution Quarterly, African Security, Peace Research: Canadian Journal of Peace and Conflict Studies, International Journal on World Peace, and Georgetown Journal of International Affairs, among others.