Ukraine and Russia have Created an International Disorder 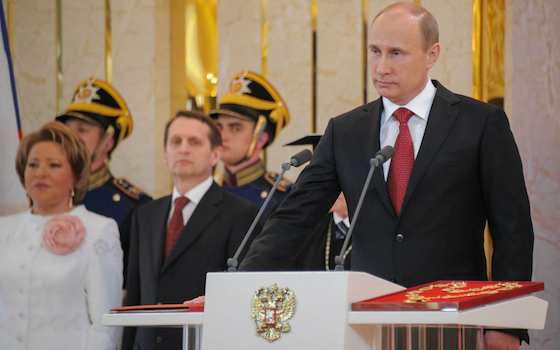 Ukraine and Russia have Created an International Disorder

An international disorder unmatched since the interwar 1930s has been created by the drama of Ukraine and the Russians, combined with the inherent self-destructive forces of the Israeli-Palestinian conflict, the developing civil war over theological as well as political issues inside the Islamic states, and the serious risk of collapse in the .

At least no ideological dictatorships are on the march, nor is any new millenarian totalitarianism apparent, only confusion, incompetence, and intellectual and moral disorder. But these are bad enough, in an over-armed world.

Only one man seems to have a clear ambition. Vladimir Putin wishes to return position and power to Russia, and so far has shown the clear-headedness to deal with those who oppose him.

His is not an ignoble ambition, if the prospective subjects of his Eurasian economic bloc are willing to have it happen, and see advantage in it. Beyond Crimea, this is by no means assured, and eastern Ukraine may prove a stubborn obstacle to the reunion of the Russian-speaking peoples who live on Russia's western and Baltic frontiers, if that is what President Putin wants.

It might be accomplished diplomatically, which is what he has suggested that he wants -- thus Russia's proposal for referenda in contested areas and negotiations with Western supporters of a new Ukrainian government, possessing a new electoral mandate. But it may not be possible that way, and the quality of the diplomacy thus far displayed by Brussels -- by both EU and -- and by the United States has amounted to little more than bellicosity and unenforceable threats.

No one knows what the United States wants in this region, beyond the unacceptable ambition it has displayed since Communism's collapse -- and which now has exploded in its face -- of shoving membership and Western ostensibly-defensive/opportunistically-offensive missile installations right up to the Russian borders. This can only be understood in Moscow as a hostile policy.

apparatus of external relations has obtusely followed any lead proposed by one of its members, or by the United States, without public examination of the proposal's utility to Europe. Its sole independent line of policy has been territorial expansion of the EU with disregard to the national character, political maturity, or existing policies of the subjects of this expansion.

Why should Slavic and Orthodox-Uniate Ukraine, its history painfully intertwined with Russia's, be made a member of what was and still essentially is Charlemagne's post-Roman Europe? Why does Turkey belong in Christian Europe? If asked, could President Barack Obama give a considered and historically grounded answer to these two questions? (Or the Baroness Ashton.) Or does the machinery of foreign policy-making grind relentlessly along behind Mr. Obama's back, or beyond his attention? This indifference, plus mindless EU expansionism, paralleling that of a dominated by Neo-Conservative thinking, have now ignited a very large crisis which neither institution, alone, is capable of resolving.

And then we have the Muslim conflagration set off by George H.W. Bush and his hysterical son, George W. Bush, with his minders from the Dark Side. Iraq, Syria, Egypt, Libya, Yemen, Lebanon, Afghanistan, Pakistan -- in all of them, a President Bush, or President Obama, together with his accomplices, has passed their way, sowing annihilation.

And at the source, the struggle of Jews and Muslims for the Holy Land. Barack Obama and John Kerry have been the latest Americans to promise its solution, in the face of the manifest unwillingness of Israel to allow the conflict to be solved on any terms that do not expel all the Palestinians from the Palestinian Occupied Territories, and award these to Israel (God's lands, therefore Zionist Israel's: Sheldon Adelson, sales agent).

The Palestinians will go to the UN and the International Criminal Court. The United States will use its money and vetoes to wreck the UN's agencies, and the international courts, which it refuses to recognize. There may be a new Intifada. Israel will bomb Iran. The United States will deploy troops to defend Israel. Russia will arm the Arabs and rearm Iran. The European states will withdraw from all of this. God will look down and weep at what is done in His name.

"Ukraine and Russia have Created an International Disorder"