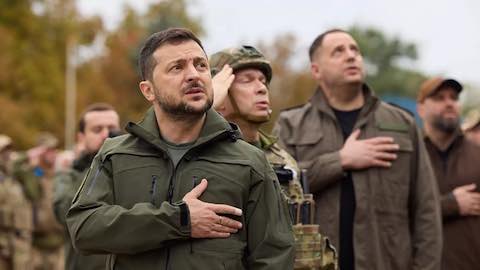 Ukraine and Russia face a winter not only of discontent but of decision.

Russia's war against Ukraine, which President Vladimir Putin began in 2014 and expanded in February, has taken a dramatic turn following Ukrainian forces' liberation, in less than a week, of some 3,400 square miles (8,800 square kilometers) of territory in the country's northeastern Kharkiv district. Russian strategists, apparently focused on the ongoing Ukrainian counteroffensive in the country's south, were unprepared for the attacks, and Russia's poorly trained and poorly led troops were no match for their highly competent and motivated Ukrainian counterparts.

What happened was a turn, but not yet a turning point, in the war. It is too soon to extrapolate from Ukraine's gains in one area, much less conclude that what happened in Kharkiv is a harbinger for the entire country. Russia still occupies the vast majority of the territory it seized in 2014 and subsequently, and many Russians regard Crimea in particular as being theirs. This suggests that taking it back would prove extremely difficult, especially as more military force is required to conduct offensive operations than to defend.

Still, what Ukraine has accomplished is significant by any measure and has led to a major shift in thinking within the Ukrainian government, as I learned firsthand in Kyiv. Months ago, the goal for many Ukrainians was the survival of an independent, viable Ukraine -- even if the state was not in possession of all its territory. But the government's war aims -- the definition of what constitutes victory -- are becoming more ambitious, owing to Russian brutality and Ukrainian forces' recent territorial gains. In response to my question, Defense Minister Oleksiy Reznikov called for the return of all the country's land, including what Russia took in 2014. To this he added a call for economic reparations to finance a reconstruction bill estimated at $350 billion. And he insisted that those in Russia responsible for this act of aggression and associated war crimes be held legally accountable.

Recent military developments will also influence the politics of European countries, where surging energy prices have kindled opposition to providing Ukraine with arms and money. But the argument that Russian military superiority made support for Ukraine useless has now been proven wrong. With Russia cutting off gas supplies, Ukraine's recent military success will make it easier for European governments to justify economic and personal sacrifice during what promises to be a difficult winter.

Ukraine's counteroffensive is having a powerful impact on Russian politics as well. Putin, facing growing criticism from conservative, nationalist forces at home, will have to decide whether to double down on the war effort and, if so, how to go about it. Doing more and asking more of the Russian people is not without domestic political risks, but arguably it could be less risky for him than a course of action that leads to additional, cascading military defeats.

For now, there is the prospect of several more months of intense fighting in the northeast and south of the country. Eventually, though, the scale will diminish as a result of frigid weather and the inability of either side to sustain large military operations.

This reduction in the fighting will provide time for reflection. Ukraine's leaders will need to consider their expanding war aims and whether they are of equal priority. Here, a major consideration will be the war's growing economic costs: loss of an estimated one-third of output, double-digit inflation, a sinking currency, skyrocketing debt, and ever-greater dependence on foreign aid. Economic reconstruction will be slowed by uncertainty over whether the conflict will continue.

Then there are the human costs.

Ukraine has suffered a high number of casualties among its armed forces and civilian population, while nearly 13 million Ukrainians are internally displaced or living as refugees across Europe. Ukraine will press for a complete military victory, but hanging over this objective is the question of whether some compromise on goals, perhaps on an interim basis, might need to be explored.

Putin retains many options that would make it more difficult for Ukraine to regain more Russian-occupied territory. Up to now, Putin has refused to acknowledge that Russia is in a war that requires widespread conscription and mobilization, either because he underestimated his foe or worried about domestic political reactions. This could change at any time, as could the Kremlin's avoidance of attacking a NATO country or using chemical or even nuclear weapons. What Putin has to weigh is the likely military and economic response from the West and whether it would leave him better or worse off at home.

The West, for its part, should continue to provide Ukraine with the quality and quantity of military and economic support it requires. There are strong strategic reasons for doing so, including to deter future aggression by Russia, China, or anyone else. In addition, Putin and others in Russia should be made to understand the price they would pay for expanding the war geographically or by introducing weapons of mass destruction. Plans to implement such responses need to be readied if deterrence fails.

We are thus facing a winter not only of discontent (as Ukrainian President Volodymyr Zelensky described it at a meeting in Kyiv last week) but also of decision. What seems certain is that the war will go on for the foreseeable future. It is inconceivable that Putin will agree to Ukrainian demands, just as it is impossible to see Ukraine settling for much (if anything) less. What remains to be seen is how decisions made away from the battlefield this winter affect the course of the war come spring.