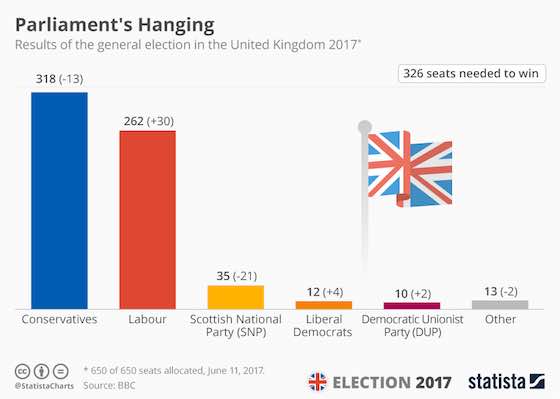 The Conservatives under Prime Minister Theresa May have squandered a comfortable hold over their closest rival, the Labour Party.

The Conservatives lost 13 seats in the House of Commons in the general election. After all of the 650 seats (one for each constituency) were allocated, the Conservatives stood to be awarded 318 seats (updated) - not enough to win!

In contrast, Labour made late but big gains, also a personal win for contested party boss Jeremy Corbyn, facing many critics in his own tribe. His party gained 30 seats and was awarded 262 seats in total.

The outcome is a hefty setback for Prime Minister May who had called the early election, hoping to be awarded a solid mandate to go into hard Brexit negotiations with the EU. They are scheduled to start in eleven days. The election outcome could be read as a vote for more subtle Brexit negotiations, as May had promised to aim for a hard Brexit, leaving the common EU market.

When, as in this case, none of the parties get the 326 seats (half of the 650 total seats plus one) needed to win, it's called a hung parliament, which also was the case in the election 2010.