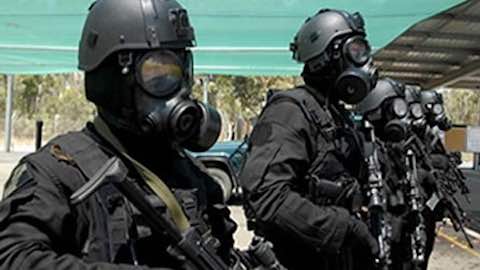 Paul Rogers is concerned about the growing size and activities of British Special Forces. He's particularly worried about how they are being deployed, their accountability and effectiveness, and the key role they're playing in what he sees as a dubious trend -- i.e., a general shift towards 'shadow warfare.'

British Special Forces have witnessed a major expansion in their size and activity in the last decade and are a priority for investment over the next few years. With reports of their growing activity in Iraq, Syria and Libya, this briefing looks at the current size and role of the various units of United Kingdom Special Forces. It asks crucial questions of their deployment, accountability and effectiveness as the most important component of a growing trend towards covert or ‘shadow’ warfare.

Last November the UK Prime Minister, David Cameron, announced plans to spend an additional £2 billion over the next five years on new weapons, vehicles and other equipment for the UK’s Special Forces. While it was reported that this would not result in an increase in personnel numbers for the Special Air Service (SAS) and the Special Boat Service (SBS), it is probable that there will be increases in the numbers in various support groups. The announcement came at a time of substantially increased activity for UK Special Forces, including reports of operations in Iraq, Syria and Libya, with these seen as important elements in the UK’s contribution to the coalition against the so-called Islamic State (IS).

This does, though, raise the issue of the accountability of an increasingly significant element of the UK’s defence posture given the policy of successive governments to minimise public debate. This policy even extends to a lack of parliamentary accountability in most circumstances. In this context, the briefing provides a short introduction to the UK Special Forces and raises issues that stem from the secrecy which surrounds their use.

In the past fifteen years there has been a substantial increase in the size of Special Forces across western countries. This is especially the case in the United States where US Special Operations Command (USSOCOM) now has around 70,000 personnel, not far short of the entire British Army after the current cutbacks have been completed. Part of the reason for the expansion has been the rise in “irregular war” stemming from the evolution of al-Qaida and IS and conflicts in Afghanistan, Iraq, Pakistan, Syria, Libya, Nigeria, Mali, Yemen, Somalia and elsewhere, but a significant factor has been the failure of large-scale overseas deployments of western troops since 9/11. Special Forces along with armed drones, private military companies, and other forms of remote warfare are therefore seen as necessary responses to evolving security threats, with Britain heavily involved in this process.

At the core of Britain’s Special Forces is the Special Air Service Regiment, 22 SAS, which developed slowly and variably from its World War II origins until 1980 and then expanded and consolidated. It has long been regarded as one of the most effective of the world’s Special Forces; the US Delta Force was partly modelled on the SAS, as were the Australian, New Zealand and Zimbabwean SAS regiments. Now, though, US elements such as Delta Force and the Navy’s SEAL teams are seen as much better equipped than the SAS, although the UK Ministry of Defence is currently investing heavily in that area.

22 SAS normally has a strength of 400 to 600 and is based at Credenhill near Hereford at what was originally RAF Hereford. Troopers may spend much of their army careers with 22 SAS although officers will tend to rotate from other regiments, especially the Paras and the Guards. Officers are typically public school educated and have long been known as “Ruperts” by the troopers. The troopers and especially the senior NCOs are regarded as the core of the SAS accruing diverse experience during their careers and making them eminently employable by private military companies, several of which are based around Hereford. Meanwhile, many SAS officers go on to occupy high positions in the armed forces, including one recent Chief of Defence Staff who, when serving in the SAS, ran the body guard for Kenya’s President Jomo Kenyatta.

The Special Boat Service is a smaller Royal Marines unit. While it may specialise in amphibious operations its activities are much wider than this and it performs many roles similar to the SAS. The SBS has recently seen long periods of deployment in Afghanistan. It is based at Hamworthy Barracks, RN Poole in Dorset, is organised in four squadrons. Its numbers are in the low hundreds and there is a reserve element.

The Special Forces Support Group is based on the 1st battalion of the Parachute Regiment together with a substantial Royal Marines element and a smaller RAF Regiment contingent, in all probably numbering around 800 but subject to change. It is based at the large RAF St Athan centre in South Wales which is now a substantial tri-service facility. The SFSG backs up many SAS and SBS activities, was established in 2006 and represents the largest of the UK Special Force expansions over the past decade. “Back up” may include logistic support in conflict zones, direct support for offensive operations and training of local forces. The SFSG has operated across the Middle East and also in sub-Saharan Africa.

The Special Reconnaissance Regiment was developed from 14 Intelligence Company, established in 2005, draws on volunteers from across the armed forces, is reported to be based at Hereford along with 22 SAS, and has several hundred personnel.

The Special Signals Regiment (18 Signal Regiment), also established in 2005, is reported to be of a similar size and has units attached to SAS and SBS squadrons.

Joint Special Forces Aviation Wing drawn from the RAF and the Army Air Corps is based primarily at RAF Odiham, near Hook in Hampshire. It utilises a range of helicopter types including Chinook and Gazelle, and the main fixed-wing type is the C-130J Hercules.

The overall strength of all the UK Special Forces is likely to be close to 3,000 at any one time, with quite substantial reserves, especially SAS (21 and 23 regiments) and SBS, but personnel numbers do vary with demands. The central organisation is the UK Special Forces Directorate which was formed in 1987.

UK Special Forces have been much-hyped in populist “non-fiction”, often involving gross exaggerations of actual achievements and little coverage of failed operations. At the official level, government rarely reveals any details of Special Force operations and it is clear that they function even in countries where HMG denies there are boots “on the ground”. Because of this, opacity of Information is resolutely maintained. Members of parliament seeking comments on Special Force operations are routinely told that “it is not government practice…” etc., but selected journalists are from time to time fed accounts of particular operations that that can be used to publish positive stories. Details of such successes are therefore useful in promoting the Special Force idea, although this is not infrequently resented elsewhere in the armed forces.

The sustained secrecy, selective control of information and persistent lack of transparency militates against proper parliamentary accountability and also a wider public debate about Special Forces roles. This is a situation that has been maintained by successive governments, though it is particularly intensive at present. There is a strong argument that in an era of irregular war it would be healthy for a democracy to be able to engage in open debate, and not just in parliament.

One of the reasons for the likely increased use of Special Forces in the coming years is the belief that they have proved effective in the past. They are seen, in particular, as having been the key to the decline in the severity of the insurgency in Iraq between 2005 and 2007, one consequence being that Senator Barack Obama could fight the 2008 presidential election campaign on a policy of the US withdrawing from Iraq. In reality, though, that initial success laid the basis for the evolution of IS, a process analysed in my October 2014 briefing:

Under General Stanley McChrystal, the US Joint Special Operations Command (JSOC) developed a network-centric model which used four highly trained and well-armed Special Forces groups to seek out and destroy elements of AQI [al-Qaida in Iraq, the precursor to IS] and related groups across central and north-western Iraq. Commonly known as Task Force 145, the four Task Force groups each had a regional focus, with the personnel drawn from three US formations - SEAL Team 6, a Delta Squadron and a Ranger battalion - and an SAS squadron from the UK.These Task Forces had access to a wide range of intelligence but operated with considerable independence, undertaking up to 300 raids a month to kill or capture suspected insurgents, the latter frequently subject to intense physical interrogation in order to gain information leading to further raids. [AQI leader Abu Musab al-]Zarqawi himself was killed in October 2006 and over a three-year period to late 2007 some thousands of suspected insurgents were killed and tens of thousands detained, 20,000 of them in Camp Bucca near Basra. Detainees were mostly held without trial, some for several years, but most were ultimately released by the time the US withdrew its combat forces in 2011. Hundreds more were freed in a concentrated campaign of attacks on Iraqi prisons in 2012-13.

The view from the Pentagon was that JSOC operations and the establishment of Sunni militias opposed to Zarqawi’s brutal activities, coupled with a surge of US forces in 2007, were the core factors that led to an easing of the war by 2008. That may have been the case, but what is now clear is that the core military leadership of IS is heavily dependent on Iraqi paramilitary survivors from that period.

At the time of the JSOC operations, what is now being called the “shadow war” in Iraq was conducted with an absolute minimum of publicity, one result being virtually no public debate, let alone parliamentary accountability. In the event, this shadow war may initially have been seen as a success, but one of the long term effects was to help ensure the evolution and resilience of IS.

There is now mounting evidence that western Special Forces are conducting similar kinds of operations in Syria, Iraq and Libya, again with virtually no public awareness. The assumption of western governments may be that this is the main way to fight a very difficult and dangerous enemy but unless the experience of the war in Iraq is taken into account the same mistakes may well be made.

The expanded use of Special Forces in the wars against extreme movements raises major issues of transparency and accountability, both of which are currently lacking. This, in turn, is part of a wider move towards remote warfare, which is also evolving with a similar lack of openness. Given the many problems that have arisen in the conduct of the “war on terror” over nearly fifteen years, there is a strong argument that there should be far more open debate on the conduct of remote warfare, not least the evolving use of Special Forces.