The Illusive Nature of Euroscepticism 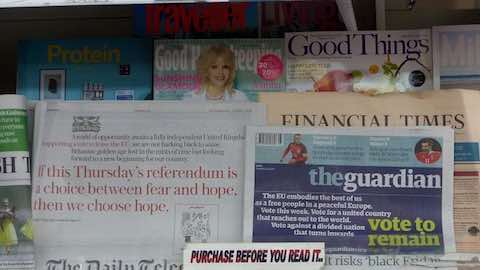 The Illusive Nature of Euroscepticism

Stereotypes commonly occurring in the British press go at the expense of people's opportunities to inform themselves about the European Union.

The stream of news related to the forthcoming British withdrawal from the EU isn't likely to dry up anytime soon. Being a scholar who is interested in media and Euroscepticism, one piece of news caught my attention. On 29 November, several British media -- for instance, The Independent -- reported that News Group Newspapers, the company that owns The Sun and The Times, had had to register as a campaign group, following a Brexit poster campaign initiated by The Sun. More than 96,000 pounds was spent on a ‘BeLEAVE in Britain’ poster (Interesting detail: The Times favoured Bremain).

The anti-European stance of parts of the British press is, of course, rather well documented. For instance, in an article published in 2012 Oliver Daddow wrote that the rhetoric of the British press emphasises ‘destructive dissent’ based on perceived ‘threats to British sovereignty and identity’ originating from a German-run continent. And last year Nick Startin explained how the tabloid press in particular have played a key role in the radicalisation of the British EU debate, having had a clear impact on the framing of (debates about) the EU. In fact, a recent study by Press Gazette found that a clear majority of the readers of four of the national newspapers that most vocally favoured a Brexit -- the Daily Express, Daily Mail, Daily Telegraph and The Sun -- voted for Britain to leave the EU.

Stereotypes commonly occur in the British press and are an important source for misinterpretation of European politics. Such unbalanced reporting goes at the expense of people's opportunities to inform themselves about the EU. While this certainly also occurs in other EU states, the British media system differs in that newspapers in particular tend to be much more vocal and politically outspoken than in many other European countries. Nonetheless, it is common practice to proclaim that 'the media' across Europe are negative about politics and Eurosceptic in their outlook towards the EU. Yet, there are two problems here: the illusiveness of Euroscepticism and the relatively small body of research on media and Euroscepticism.

The first problem concerns the rather abstract notion of 'Euroscepticism', which tends to be used in different contexts, often without clarifying what it actually entails. In her book Understanding Euroscepticism, Cécile Leconte calls Euroscepticism a ‘plastic notion’. Similarly, Simon Usherwood refers to it as a ‘reductive term’. In yet to be published research, I found that there is a much broader variety of criticism towards the EU as covered by the media, than tends to be assumed. For instance, when policies are criticised for the choices made (e.g. austerity vs. investment), but without denying the need for EU involvement. Yet, at the same time media reporting of EU affairs often reduces -- to borrow from Usherwood -- it to an anti-European stance, disregarding the broader spectrum of perspectives.

This then brings me to the second problem: the existing body of literature on Euroscepticism mostly focusses on political parties and public opinion and has only recently broadened its scope. New research reveals that critical debates about the EU often have a transnational dimension. In addition, new media research shows that the multi-faced nature of Euroscepticism is also increasingly reflected in different types of media. For instance, Charlotte Galpin, Ben Leruth and I are currently in the process of writing up a paper in which we've looked into how Brexit was covered by centre-right newspapers in France, Germany and the Netherlands. What emerges, is a increasingly shared discourse in which initial understanding for British calls for reforms gradually is replaced by a debate framed in terms of ‘us’ (EU27) versus ‘them’ (Britain).

Based on these two points, I believe that we should be careful when referring to 'the media' in the context of debates about Brexit and Euroscepticism. Media systems across Europe are different, as is the degree of criticism towards the EU. While I agree with my fellow curator Russell Foster that Brexit “must be understood as merely one symptom of a much broader problem”, this should not mean that we equate Euroscepticism with anti-Europeanism. Instead, we should actually make sure to aim for a more encompassing understanding of the variety of critical and oppositional opinions towards the EU and its policies.

This is not to say that there is no ground to criticise the EU -- far from it! The democratic nature of EU decision-making and the resulting policy choices could be (and should be) critically discussed. Yet, as I wrote in my previous post, support for the EU went up post-Brexit. In fact, in the recent rerun of the Austrian presidential elections, newly elected President Alexander van der Bellen campaigned on a pro-European ticket and, against all odds, beat Eurosceptic candidate Norbert Hofer with a bigger margin than earlier this year. This alone may not be enough to save the EU, but it certainly emphasises the need -- as argued by Cas Mudde -- to put things in ‘proper perspective’ and steer away from a (self-fulfilling?) story in which ‘the people’ or ‘the media’ are against the EU.

Dr. Patrick Bijsmans is Assistant Professor in European Studies at Maastricht University. His research interests include Euroscepticism, media coverage of EU affairs and the European public sphere, as well as issues related to teaching and learning in European Studies. Patrick teaches BA and MA courses in in European Studies, covering topics such as EU politics and academic research and writing skills. He also coordinates the teacher training trajectory of the university's Faculty of Arts and Social Sciences.

Europe: "The Illusive Nature of Euroscepticism"