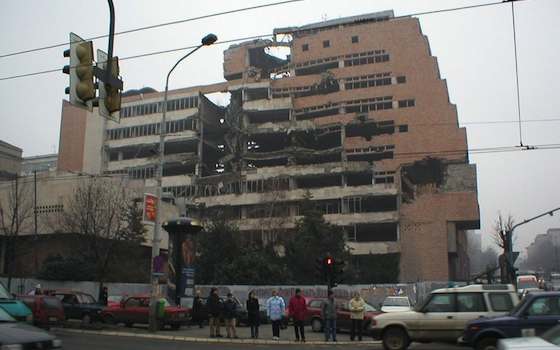 The worst nationalist passions in Croatia, Bosnia, Kosovo, and Serbia have subsided

The disintegration of Yugoslavia was a triumph of nationalist passions over political interests. If the latter had prevailed, the process would at least have proceeded peacefully, as was the case with Czechoslovakia. Instead, three wars took place one after the other, in Croatia, Bosnia, and Kosovo, along with NATO attacks on Serbia.

Some of those passions can still be glimpsed in the region -- in divided Kosovo, in a Macedonia busy building statues to Alexander the Great. But the worst excesses have subsided.

"If you look back at the nationalist forces and parties in politics, society, and culture from the late 1980s, they certainly don't have the same ferocious, expansionist, and very self-intoxicated appearance," Mark Thompson, author of A Paper House

, told me in a short interview in London in January. "It's not revolutionary in the way that it was. It's not euphoric in the way that it was then when those individuals and groups who were opposing radicalism and starting to speak up for compromise were outshouted. Those groups supporting compromise appeared hopelessly tawdry and dull compared to these yelling, bellowing, all-singing, all-dancing popular fronts of nationalist mobilization. That's no longer there."

As the passions subside, political interests are reasserting themselves. "It's already the case in the cultural sphere," Thompson continued. "Economically, it's happening and will continue to grow. In some ways, after all, the establishment of sovereignty by the entities of the former Yugoslavia was a charade: a manifestation of largely non-existent power."

In the interview, Thompson also reflected on the role that social media might have played in the conflict if Twitter and Facebook had been around at the time.

Do you remember where you were and what you were thinking when you heard about the fall of the Berlin Wall?

I don't remember. But I remember that period very vividly. I remember thinking that now all the significant political debates will be within liberalism. That was my first coherent thought. There was a general feeling of amazement that all this was happening, that this frozen sea had cracked. But my first intellectual thought was that the Left was gone, that the whole landscape of Right and Left was absolutely shaken up, and liberalism would now be the arena where the essential political contests would take place rather than socialism against liberalism.

I was going to Yugoslav from late 1987. I shared the illusions of many Yugoslavs, I think, until Yugoslavia fell apart. I didn't become in the least perceptive until the decisive disintegration had already happened.

Some in the region, particularly those in Serbia who fought a long time against Milosevic, felt that it didn't have to happen the way it did, that the dissolution of the country didn't have to result in war. And the reason that it resulted in war was largely the function of a small coterie around Milosevic who had a particular political program and followed through on it rather ruthlessly. Do you agree with that?

If I had to summarize the key dynamics on the back of a postage stamp, I would use the language that you used. One can go on endlessly about the contributing factors and the further causes. But in essence the conviction of the elite of the League of Communists of Serbia was that they could recentralize the federation on Serbian terms, and they would use the threat of internecine violence as leverage to achieve that.

Milosevic was simply 10 years too late. If the Cold War had still been in existence, with that great iron brace around Yugoslavia effectively preventing a break-up or making a breakup by the most dissatisfied republics very much harder to achieve, then his coercive recentralization of the federation would very likely have succeeded.

Jumping ahead, some folks in the former Yugoslavia foresee a kind of recreation of Yugoslavia, not as a country of course but as some kind of regional network in which some of the economic structures are reconfigured, transportation systems reestablished, and so on. The now six or seven countries have still a lot in common and could benefit in fact from this kind of cooperation. Is that utopianism or a realistic scenario?

I think that's the cool perception of real interests, real traditions, real markets, and real loyalties and affinities, which are reasserting themselves and will continue to reassert themselves. It's already the case in the cultural sphere. Economically, it's happening and will continue to grow. In some ways, after all, the establishment of sovereignty by the entities of the former Yugoslavia was a charade: a manifestation of largely non-existent power.

You're working on media and the impact of new technologies. Given the role that technology has played in the Arab Spring and other places in the world, would there have been a different scenario in Yugoslavia if those technologies had been available back then?

That is a "what if" question well worth asking. My instant response is no, if you look at the ways in which social media play host now to extremist, chauvinist strands of feeling and opinion. In the successor countries, the issues of sovereignty and identity are particularly vexed, and they are unsolved in all of them except Slovenia. So, that might give evidence for my negative response. The groundswell of public emotion around the late 1980s and early 1990s was in favor of uncompromising, radical, and eventually violent solutions. It was not in favor of the pacific option represented by the last federal prime minister, Ante Markovic.

Would putting social media tools and new technologies in the hands of every Yugoslav in 1990 early 1991 enabled a silent majority of peace-loving opinion to express itself and sway the political elites who were basically playing a game of chicken? I suspect not. I don't think there's any indication, even from the experiences recently where social media played a progressive role, that it could have opposed political dynamics that were elite-led and -- and this is the terrible truth -- popular to a considerable extent.

Having said this, it is of course also true that the popular groundswell that I mention was partly generated and protected by government-controlled media systems, which were able to monopolize the public information space. If those systems had not been able to achieve that monopoly -- if, in other words, they could have been challenged and subverted by online sources of information, as in the Middle East today -- then the belligerent elites might have been deprived of armed conflict as their ultimate leverage and resort. We'll never know.

The more optimistic in the region would argue that nationalism has largely burned itself out -- if you look at HDZ in Croatia or even the ruling party in Serbia, which started as a nationalist movement and has moved to the center and embraced the EU more or less. There's still Dveri in Serbia and the Party of Rights in Croatia. But would you agree that nationalism has largely burned itself out?

No, I wouldn't. But I agree that it's changed. It's changed so much that to use the term single term "nationalism" is perhaps not helpful. If you look back at the nationalist forces and parties in politics, society, and culture from the late 1980s, they certainly don't have the same ferocious, expansionist, and very self-intoxicated appearance. It's not revolutionary in the way that it was. It's not euphoric in the way that it was then when those individuals and groups who were opposing radicalism and starting to speak up for compromise were outshouted. Those groups supporting compromise appeared hopelessly tawdry and dull compared to these yelling, bellowing, all-singing, all-dancing popular fronts of nationalist mobilization. That's no longer there.

However, as far as I can tell -- and I'm no longer deeply informed -- the Serbian consensus over Bosnia and over Kosovo too has been to keep their heads stuck firmly in the sand and refuse to acknowledge not only what Serbia did in the 1990s but what has been irreversible change since 1999. That refusal to admit reality constitutes a denial that is easily manipulated by politicians, like the current Serbian president and the governing party there. In Croatia, the situation is slightly better. There are nationalist buttons there that can be pressed and that more enlightened politicians fear. Macedonia has had its own parodic, tragic-comic discovery of nationalist mobilization in the last few years, symbolized by the physical remaking of the capital city. And Kosovo, of course, remains completely polarized as it ever was.

When you think back to roughly 1989-1992, have you rethought any of your own positions, whether about politics or economics?