The Rich List and The West's Culture of Envy 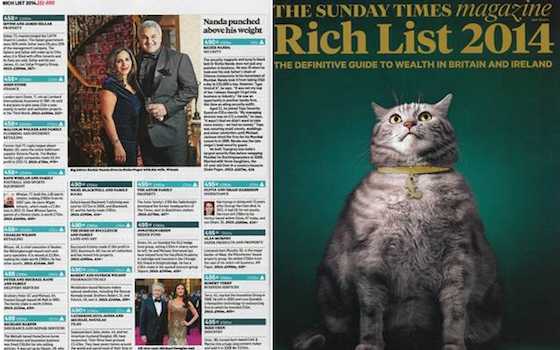 The Rich List and The West's Culture of Envy

In the 1970s, while working as a low-paid cub reporter in Houston, Texas, I always looked forward to the annual Christmas catalogs from and Sakowitz, a local luxury department store. Both contained outrageously expensive things that only the super-rich could afford -- his and hers Thunderbirds stick in my memory. My wife and I couldn't wait to thumb through them and we frequently laughed at how much some of the items cost, wondering if even rich Texans would spend so extravagantly.

Another tribute to conspicuous wealth comes in the annual "Rich List," a guide to the 1,000 richest men and women in Britain, published in a special edition of . A fat feline sits proudly on the cover with the symbol of a British pound (in gold) around its neck.

In addition to income rankings, the list is broken down by country and region. Most names will not be familiar to Americans, unless they read the business pages or engage in similar businesses or income-producing activities. One couple possibly familiar to many Americans -- number two among the wealthiest in Northern Ireland -- are the actress and co-producer of TV's "The Bible" and "Son of God," Roma Downey, who is Irish, and her reality TV husband, the British-born Mark Burnett.

Apart from the fun of reading how much people are worth, the Times story accompanying the list promises the rankings "will create a combination of envy, admiration and mild outrage." Still, it bears reading and can easily be applied to our modern Western culture of envy, greed and entitlement promoted by President Obama and Democrats.

Titled "Don't beat the rich: just join them," the Times writes: "(the list) is a picture of self-made millionaires and billionaires, many of whom have overcome educational disadvantages and personal setbacks -- including poverty and the loss of a parent -- to succeed. Most eschewed cozy normality, taking risks and putting their livelihoods on the line in their determination to succeed."

With an estimated 47 million Americans on food stamps and others receiving other kinds of government assistance; with President Obama and his fellow liberal Democrats preaching a false financial gospel aimed at penalizing the wealthy and the successful, could it be, as another Times article asserts, "...western democracy is on its last legs, crushed under the weight of a bloated state"? The story suggests the West "look east, where the Asian model -- minimal welfare, restricted rights -- is producing the world's most successful societies."

What amazes me is that Western values and a work ethic that created so many rich and successful people, who did not settle for the circumstances into which they were born, have been ceded to the welfare state. In Asia, individuals and some nations -- notably Singapore -- have adopted the West's former standards, creating unprecedented prosperity.

In Britain and America, just a few generations ago, those who came by their wealth and success honestly and through hard work were idolized and emulated. The attitude shared by those who began life in modest circumstances, was, "if they can do it, so can I." Today, we appear to punish success and treat successful people and those independent of government as enemies who have stolen from what rightfully belongs to others.

The "Rich List" is fun to read, but the stories behind their wealth ought to be a lesson to people living in free societies. That lesson is that while not all can necessarily become as rich as these men and women, by adopting their work ethic they can improve their lives far beyond their current place on the economic ladder, to their benefit and to the benefit of their nation.

"The Rich List and The West's Culture of Envy"