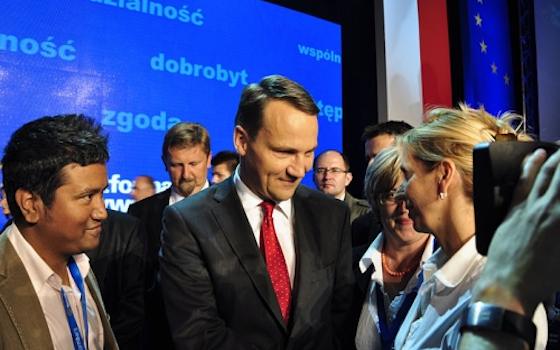 The departure of Carl Bildt and Radoslaw Sikorski as foreign ministers of Sweden and Poland respectively is an interesting development for European foreign policy. The timing is awful. At a moment when Europe is faced with crises in the east and the south, Europe can ill afford to lose either its most experienced statesmen or the vision they bring to the table. Both leaders simultaneously believe in the strategic necessity of the EU and they are as comfortable in Washington as they are at home in Warsaw or Stockholm. With Bildt and Sikorski gone, the EU is also lacking any obvious hardliners on Russia. This may satisfy some in the EU but surely Vladimir Putin must be pleased with their replacements.

Both Bildt and Sikorski were touted as potential replacements for Catherine Ashton before the appointment of Federica Mogherini, and it is clear to see why they were candidates for the job. Each had the ear of London, Washington and Berlin. Each took a strong stance on Russia; over time their absence may help soften the EU's rhetoric and policies vis-à-vis Moscow. Whether through a bolstering of Nordic defence cooperation or the modernisation of Poland's armed forces, each has been involved in strengthening their countries' defences. In the case of Poland, Sikorski's tenure has done much to raise his country's international standing.

To be sure, every political leader will have their supporters and detractors and Bildt was replaced following a general election, whereas Sikorski was moved following Poland's success in securing the European Council presidency. There is thus no clearer example of how domestic interests expressed through the ballot box and government reshuffles have a direct impact on the EU's political leadership. True, the fate of EU foreign policy never rested on the shoulders of Bildt and Sikorski alone, and EU foreign policy needs more than two strong personalities if it is to succeed – yet their absence will be felt.

Bildt stressed how Europeans needed to change their mindset in a world today barely recognisable from when he took office in 2006. As he recently stated, in its ‘attempt to formulate a security strategy [the EU] said that "Europe has never been so prosperous, so secure nor so free" and that we had entered into "a period of peace and stability unprecedented in European history." That was then. Now no one would find those words appropriate.' This point is still not an obvious fact in many quarters in Brussels and in the national capitals.

For his part, Sikorski focused on European unity as the key ingredient to a better EU common foreign and security policy. Recall, for example, his historically significant plea to Germany stressing ‘German inaction was scarier than German action'. Think also of Sikorski's rather frank speech to an elite gathering at Blenheim Palace, where he turned his fire on British eurosceptism (only Sikorski, with his close ties to Britain, could have made such a speech – it sounded like welcome fraternal advice rather than a lecture).

Both Bildt and Sikorski were behind the European Global Strategy initiative and they added much needed ‘strategic depth' to what was otherwise a rather low-key tenure for Catherine Ashton (especially at the beginning of her time in office). Bildt and Sikorski played a key role in maintaining high standards inside the Foreign Affairs Council (FAC); remember that letter sent to the High Representative in 2011? Their political affiliation is besides the point, as they have the ability to call a spade a spade – this is all that really counts in international politics. This is an important trait that betrays the fear that the fate of their countries are intimately tied up with the fate of the EU as a whole.

The FAC is indeed losing some of its key personalities. Not only will Bildt and Sikorski be absent but so too will William Hague – instead replaced by a committed Eurosceptic – and the only other names that really stand out are Laurent Fabius and Frank-Walter Steinmeier. Some may argue that with the absence of obvious personalities in the FAC, the incoming High Representative Mogherini may find it easier to marshal opinion and forge joint action, but this would be to overlook the experience and connections individuals such as Bildt and Sikorski bring to the table.

There will no doubt be post-election and post-reshuffle pleasantries about the appointment of Bildt's and Sikorski's successors. Yet each replacement represents an extreme: Grzegorz Schetyna is unproven and unknown outside Poland, whereas Margot Wallström comes with significant historical baggage. Wallström, in particular, will see Mogherini's appointment as an opportunity: both are from the same political family and each shares similar views about international politics. In theory they should work well together, but a lot will depend on their respective egos – it is not a foregone conclusion that, below the surface, they will work harmoniously.

Bildt's and Sikorski's departure speaks to a broader observation one can make about the FAC. Given the present composition of the FAC, is the EU about to embark on an era where the heads of government rather than the foreign ministers play a greater role in international affairs? This is a phenomenon that has been visible in the capitals for a number of years. Indeed, with the absence of proactive foreign ministers it may now even be possible for President Tusk to play a greater role in EU foreign policy. Tusk would be particularly suited to eastern affairs and he will no doubt be the man Washington, London and Berlin phone in any serious crisis situation involving the EU. Should a more obvious division of labour with the EU Council emerge, Mogherini's energies will most likely be concentrated in the south (migration, non-proliferation, etc.).

This trend was already visible under Van Rompuy's tenure (it was the Belgian and the Commission President that stopped traffic in Beijing and not Ashton), yet it raises important questions about the relationship between foreign ministers and their chiefs. If foreign ministers are to become middle managers, then there can be no place for any future Bildt or Sikorski in the FAC. This should serve as a point for further reflection, and one that may demand that the heads of government take their foreign policy role more seriously.

Mr. Daniel Fiott is a Senior Editor of European Geostrategy. He is also a Researcher at the Institute for European Studies at the Vrije Universiteit Brussel.