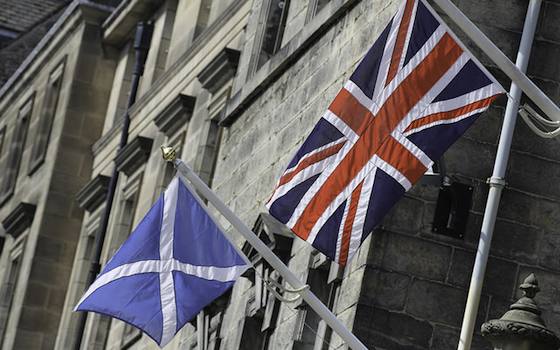 Scotland recently rejected freedom, and voted in favor of staying in the United Kingdom. Of course, this will not be the last time we hear from Scottish nationalism, and voices for self-determination and recognition will continue to be heard, until sovereignty is achieved and Scotland's earns its rightful place among the nation-states of the world.

However, apart from setting a paradigm in self-determination for the rest of the world, the Scottish referendum also gave us a lesson in the ground realities of history and nationalism.

From The Annals of History

1707 was a big year for both England and Scotland. Voluntary acts passed by the Scottish and English parliaments led to the Union of the two countries, and resulted in the creation of the Parliament of Great Britain. Back then, there were several ideological pillars on which the Union rested: the British Empire, the Royal Navy, Protestantism, et al.

Yet, after over 300 years, all of these ideological notions have either perished or become virtually dormant. Thus, when Norman Davies predicted in 2012 that the United Kingdom no longer deserves to be "united", it seemed like the only plausible and logical choice for Scotland to take the next step forward and head towards liberty.

1. Being forced to be a part of some other country or nation.

2. Being eater to be apart of one's own country or nation.

In the first case, secessionist movements in the erstwhile Soviet Union serve as the biggest examples. Kremlin's policies in 1920s-30s created a jigsaw puzzle of pseudo-ethnic entities all around USSR, and this eventually led to ethnic outbursts and nationalist movements towards the end of the twentieth century.

The second case, on the other hand, is a typical showcase of pure nationalism. It is not enough to be recognized as a part of one state; nationhood is mandatory. Both Scotland and England, for the rest of the world, were one entity in terms of identity: British. However, being British is not the same as being Scottish, or being European. This is where the concept of nationalist identity comes into play: ethnic distinctions can be extinguished over a period of time, but national distinctions tend to stick around.

As such, being a part of UK not only undermines one's Scottish identity, but also deprives him/her of a pan-European supra-national identity.

The Question of Scotland

So why did Scotland vote ‘No'?

British nationalism is a political consequence. It has been constructed, not built. Thus, each time a constituent state of the United Kingdom rethinks its identity or wishes to change the status quo, London's political considerations come into play. UK can preserve itself (at least as of now) by citing economic, social, territorial and even religious reasons. Practical constraints, if properly manipulated, can overshadow nationalist sentiments. An independent Scotland can perform well — ‘can' is not the same as ‘will'.

In that case, when will Scotland attain freedom?

Once again, take up the case of Soviet Union. Much like London, Kremlin too had constructed a sense of nationalism all around USSR. Soviet identity came before other ethnic or regional ones. However, the day Perestroika promised a sense of freedom, it triggered nationalist sentiments and the Union collapsed.

In a similar fashion, England has promised a good deal of stuff to Scotland. David Cameron made every emotional appeal that he could come up with, just to retain Scotland in the United Kingdom. This is where things get interesting: the Scottish people will now expect these promises to be delivered, and going by UK's record, it might not be an easy task.

All said and done, Scotland will have to wait for its freedom. Speaking of waiting for freedom, there are a lot many nations currently doing the same, albeit each of them has a different story to tell.

For instance, the likes of Scotland and Quebec have done their homework in self-determination, and even though the referenda have not offered a breakthrough yet, legal and political status of such nations is no longer questionable.

On the other hand, cases such as Bangsamoro in The Philippines or the various nationalist movements all over Europe, such as Northern Cyprus, Aragon and Andalusia, still have a long journey to cover both in terms of recognition and self-determination.

Freedom movements and nationalist tendencies all over the world have their own social, cultural, historical and sometimes territorial backgrounds. Thus, we need to judge each case in its own context. Scotland's ‘Yes' vote would have shaken the boundaries of the United Kingdom, both literally and metaphorically. However, the ‘No' vote too will have a tectonic impact: neither UK nor Scotland will ever be the same! It is only a matter of time before Scotland and various other nations achieve their destiny and fulfill their quest for statehood. Right to national identity can only be delayed, not denied.