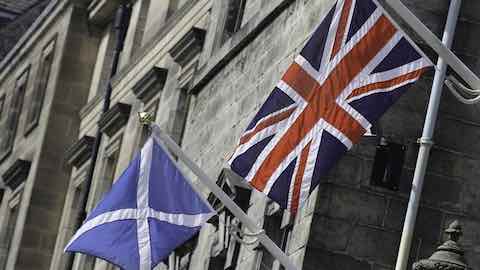 It would be beyond ironic if the decision to reclaim 'sovereignty' through Brexit were to result in secession of Scotland.

We are watching with interest and some trepidation the unfolding of the debate about how Brexit will affect Scotland.

A majority of Scots voted to remain in the European Union in the June 23 referendum in contrast to a majority in England and Wales who voted to leave. Scottish First Minister Nicola Sturgeon has appointed a Brexit Minister and convened a ‘Standing Council on Europe’ to advise on the subject.

Some analysts predict that Scotland could lose 30,000-80,000 jobs as a consequence of Brexit, although most concur that the Scottish economy will suffer less than that of England. Specifically, a report published by the Fraser of Allander Institute in Glasgow examined several possible scenarios and the most optimistic outcome sees the Scottish GDP decrease by 2% (i.e. down $4 billion), average wages lowered by $1,020, and a loss of 30,000 jobs over the next ten years. The most pessimistic scenario forecasts a 5% drop in GDP (i.e. down $6 billion), wages down $2,500, with a loss of 80,000 jobs. Optimistically, Scottish exports are predicted to decrease by 12% and services by 8%. The worst hit sectors will likely be wholesale and retail trade, transportation and storage, and research and development.

British Prime Minister Theresa May has striven to paint an optimistic picture of the effects of Brexit for Scotland, claiming that Scotland's relative comparative advantages in finance, shipbuilding, and the food and beverage sector offer the opportunity for Scotland to assume a new leading role in these areas of the global economy.

The question of how Brexit will affect immigration to Scotland is an additional related concern.

First Minister Sturgeon has said that avoiding limits on immigration from Europe is crucial for Scotland who suffers from an aging population and a skills gap. Most of Scotland's population growth derives from inward migration. The Glasgow Herald reported in September that at present approximately 173,000 EU citizens are living and working in Scotland. Scotland's needs in this area are at odds with the British government's overall plans to cut the present annual net migration of 300,000 to below 100,000.

While some claim that the Sewel Convention pertaining to devolution requires that an issue as momentous as Brexit obtain a consent motion from the Scottish Parliament, the Scottish government has been rather circumspect in its comments, reserving judgement until it becomes clear exactly how negotiations between the UK and the EU unfold. A further area where Scotland wishes a say is how legislation for the repatriation of laws currently dispensed by or shared with EU law will be framed. The May government announced that the Secretaries for Northern Ireland, Scotland, and Wales will attend the Cabinet's Brexit sub-committee ‘as required.’

You recall, the British High Court ruled that Prime Minister May's government must gain Parliamentary approval to commence the Brexit process. The government has appealed that ruling, and Scotland's government has joined the legal challenge in Britain's Supreme Court against the British government's plan to initiate exit proceedings without Parliamentary approval. Scotland's Lord Advocate James Wolffe will argue that it is unlawful for the Article 50 process to commence without a legislative consent motion from Scotland. If Scotland's (and others') claims are successful, this could pave the way for Scottish Parliamentarians to vote against leaving the EU.

From the outside looking in, the way forward and outcomes of the United Kingdom's exit from the EU are uncertain, and it is clear that the uncertainties will persist for some time. It would certainly be beyond ironic and in the view of some tragic if UK political machinations and voters' decision to reclaim ‘sovereignty’ result in the breakdown of the current constitutional order, and the secession of Scotland and perhaps even Northern Ireland.

Myra Leann Brown is Associate Professor of Political Science at the University of Florida where she teaches undergraduate- and graduate-level Global Political Economy and Politics of the European Union. Her current research focuses on the changing and interacting bases of legitimacy of European Union environmental policies.