Russia: What Do United States and the West Now Want? 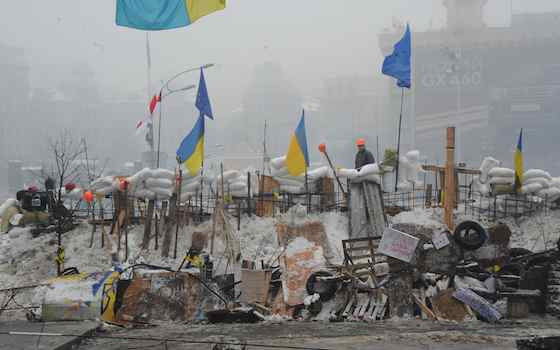 Here again in the Ukrainian affair we see the Manichean habits of mind of the Cold War, still the most powerful precedent in the last 50 years of American and Western political history and policy studies.

Among commentators and officials the tendency continues to be to frame international affairs in bipolar terms, as obviously has been the case for the whole "global war against violent extremism" -- as George W. Bush's "war against global terror" was renamed by the Obama administration: a war which, under any name, self-evidently has no conceivable possibility of being won.

What that effort accomplished was to cause vast human suffering in the Middle East and Afghanistan, to no positive result; and to inflict devastating collateral damage on international law and justice, on the American practice of habeas corpus and trial by jury of peers, and on the moral character of the American government, whose record in recent years has been to win no victories, but wage wars leaving behind them ruined societies and the grieving innocent.

Today Vladimir Putin is diabolized in Cold War fashion -- a "Hitler" according to Hillary Clinton. "A stone-cold killer" (Robert M. Gates). The author of "a global strategy [to] maintain instability" (Anders Fogh Rasmussen, secretary general of ). "The only language Putin knows is fear." (White house spokesman). Article 5 of the NATO Treaty (declaring that if one member is attacked all will respond) is being cited, as a reminder to Moscow that the three Baltic States are members. President Obama reemphasized on Tuesday that the United States will honor this promise.

Where will Putin strike next? Or will he strike at all? He says no, but Western speculation is that he might invade eastern Ukraine to "protect" the Russian majority there, or do the same in Transnistria, a Russian-speaking political entity inside Moldava (possessing an independence option should Moldava merge with Romania). The Baltic States all have substantial Russian minorities. Then there is Georgia, Armenia... and other "lost" members of the Old Russian Empire or newer U.S.S.R.

U.S. aircraft have appeared in Poland and the Baltics. American naval forces have been ordered to the Black Sea region. President Obama himself has recently reminded listeners that there are "35,000 U.S. military personnel in the Middle East" under "the direction of a president who already has shown himself willing to take military action in the past." The U.S. and Western Europe seem to be putting themselves into a third world war posture.

What is this really about?

After a chequered historical involvement in the development of Russia (which took its Christianity from Kiev -- "the Third Rome") and Poland, Lithuania, and Hapsburg Austria-Hungary (not to be gone into here), modern Ukraine became independent in 1991, a former member-state of the U.S.S.R.

There were presidential elections in 2001 and 2004, with unstable consequences. After the United States under the Clinton presidency, contrary to assurances that had been given to Mikhail Gorbachev by the senior George Bush, had pushed to incorporate all of the former East European Warsaw Pact countries, President George W. Bush resolved in 2008 that Ukraine (and Georgia) should be in , too.

Since then, the Congressionally-funded NGO, the National Endowment for Democracy, has worked to persuade Ukraine that it should take this step (and join the as well). This was the prelude to the choice offered Ukraine at the end of last year: to join a new economic bloc incorporating most former Soviet states, and led by Russia, or accept an association (not membership) with the EU. Both included financial inducements.

Ukraine's government rejected the EU proposal last November, and turned toward Russia. From that came weeks of popular demonstrations and the crisis and pro-European coup that took place, under the eyes of visiting American officials, on , and all that has happened since, including the unification of Russia with its former territory, Crimea -- welcomed by the overwhelming majority of Crimean voters in a hastily-called referendum.

What do Washington and the West now want? Washington says, "punishment" of Vladimir Putin and his Russian government.

I presume that it is not by way of war, although that risk exists as both sides demonstrate their determination and self-righteousness.

There is another way to conduct national policy and find equitable solutions to conflicts.

I have never been an admirer of the policies practiced by Henry Kissinger during the Nixon years. However, he is an intelligent and experienced man, whose view on the present situation are to be recommended, in the interest of finding "an outcome [to this crisis] compatible with the values and security interests of all sides:" (I quote his article of in The ):

1. Ukraine should have the right to choose freely its economic and political associations, including with Europe.

2. Ukraine should not join [both Henry Kissinger and George Kennan, before his death in 2005, opposed this].

3. Ukraine should be free to create any government compatible with the expressed will of its people. [One would presume that this principle logically should apply to Crimea, whose choice to join Russia post-dated this Kissinger article; in his article Dr. Kissinger opposed Russian annexation of Crimea, now a fait accompli, but called for reinforced Crimean autonomy within Ukraine].

Dr. Kissinger goes on to say that wise Ukrainian leaders would then do all they can to reconcile the national communities within their country. Internationally, they should assume a stance comparable to that of modern Finland: of strict neutrality in the quarrels of nations.

To this I would add one more counsel, this time for "wise American leaders." The United States, as many have noted, has acquired a dangerous militarist outlook on world affairs in which problems are defined primarily in military terms. There is a Washington assumption that the diplomatic approach to conflicts, and negotiated settlements that take account of both side's views, are "weak." That way is catastrophe, as many Americans by now may have noted.

"Russia: What Do United States and the West Now Want?"