The West Needs Russia's Help More than it Realizes 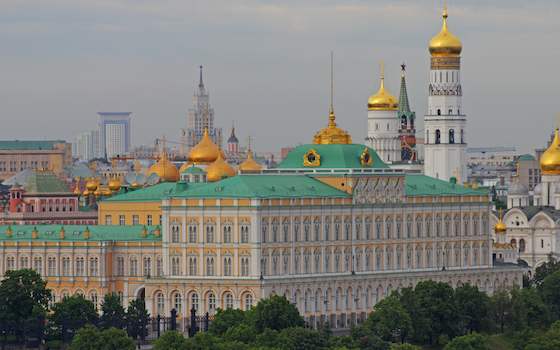 Remember when you were a kid and packed your bag to run away from home, only to quickly realize that you lacked the requisite means to follow through on your threat? Mom and Dad, after giving you a little time to save face, had to drive down the road and toss your penniless little behind and your Transformers backpack into the backseat. We're now witnessing a similar scenario with the pathetic display of political theater underway between the West and Russia over Ukraine.

Those first few hours back home with your parents were pretty awkward, weren't they? Just a short time ago, you were telling them that you had no use for them. Now, you're sheepishly asking mom when dinner will be ready. The children in Washington and Brussels need to start acting like adults when it comes to dealing with multilateral problems (like global terrorism, for example).

But we're not quite there yet. Case in point: Last week, British Foreign Minister William Hague suggested that Russia pitch in to help save the new, self-appointed, unelected anti-Russian authorities in Kiev from an imminent Ukrainian financial collapse. Two days later, U.S. Defense Secretary Chuck Hagel warned Russia to stay out of the Ukrainian conflict. In other words: "Give me money for a new Xbox! And stay out of my room!"

Democratically elected Ukrainian President Viktor Yanukovych had favored his country's traditional economic, cultural and geopolitical ties to Russia over those with Europe. It makes sense that Europe wasn't happy, but why are nations like the United States and Canada butting in at all -- particularly in advance of democratic elections to confer legitimacy on the self-appointed Ukrainian authorities?

Objectively, it's hard not to sympathize with Russian President Vladimir Putin. Put yourself in his shoes. He had just finished bailing out U.S. President Barack Obama on the Syrian conflict, taking responsibility for Bashar al-Assad and the unrest in that country so that Obama could stop Etch-A-Sketching "red lines" and threatening military action opposed by American voters. Then, Putin focused on trying to ensure that athletes from America and other countries wouldn't be attacked by the Islamic terrorists who had threatened the Sochi Olympics -- and he succeeded, despite all apprehension to the contrary.

So how is Putin thanked? With the West cheerleading an anti-Russian insurgency inside a neighboring nation that has been a primary economic and geopolitical Russian ally -- a country not only strategically critical for the transport of Russian gas into Europe, but also home to key Russian ports.

Is it really that difficult to imagine why Putin, whose job is to defend his country's interests, might be just a bit fed up, to the point of ordering Russian troops to do some high-energy calisthenics for the cameras until Obama closes his mouth?

Neither Europe nor America has any appetite for deploying military force to Ukraine over an unsigned European trade deal. And no one is going to hurt Russia economically without also hurting itself. Europe can't afford to financially support Ukraine by buying it off, and Russia can't afford to sell it.

When the dust settles on the current kerfuffle, how can Obama expect Russia to cooperate in good faith on diplomatic issues that arise with countries such as China, Iran and Syria -- all squarely in Russia's sphere of influence?

Canadian Prime Minister Stephen Harper has expressed similarly premature support for the unelected Ukrainian authorities, apparently failing to understand how Canada could be harmed by Ukraine moving toward closer economic integration with the .

Canada's and Keystone XL pipelines would mean vastly more Canadian oil products shipped to Europe, particularly in light of the new Canada-Europe free trade agreement. A recent report from a standing committee on energy in the Canadian Senate noted that "Canada is in competition with other jurisdictions to secure growing markets overseas, and could be left behind if we do not find a way to expand and diversify existing markets." Start by not cheerleading for Ukraine to steal your lunch in Europe.

The only sensible option now is de-escalation by all parties in the lead-up to democratic elections in Ukraine, scheduled for . Further insurgency could result in military action by Russia under the United Nation's "Responsibility to Protect" doctrine, which justifies foreign military intervention to protect civilians from armed domestic conflict.

"The West Needs Russia's Help More than it Realizes"