Putin's Syrian Quagmire: Costs as well as Benefits for the US 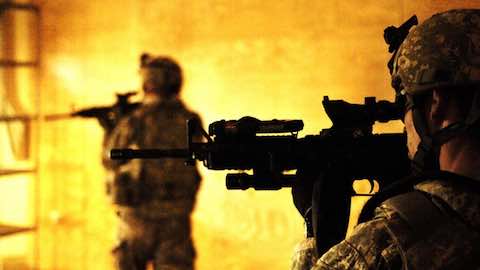 Putin's Syrian Quagmire: Costs as well as Benefits for the US

Just because Russia insists on making mistakes in Syria, the United States does not have to do so too.

In an article published on the Foreign Policy website, British Army veteran Emile Simpson argued that those "who say Washington should aggressively escalate to counter Moscow's move in Syria are wrong. Drawing Russia into the Syrian swamp is, in fact, the best opportunity the Obama administration has had in months to weaken Putin."

Simpson made some important points in his article: Putin cannot win militarily in Syria, and his efforts to broker a political solution are unachievable. There is no need, then, for the U.S. and its allies to counter Russia in Syria, and there is much to be gained by letting Putin get bogged down in a quagmire there.

A strategy of letting others make mistakes while avoiding making any oneself can be both prudent and successful. Indeed, there may be no other realistic option for the U.S. and its allies. But as the November 24 shootdown of a Russian fighter aircraft by Turkish forces along the Turkish-Syrian border shows, there is a danger that the conflict in Syria could spread. Even if the U.S. should not try to counter Russia in Syria, it does need to guard against the conflict there spreading elsewhere.

And this is a real danger. While Ankara claims that the Russian aircraft it shot down had violated Turkish airspace, Putin (predictably) claims that it had not. More ominously, he has threatened serious consequences for Turkey as a result of this action. It has already been reported that Moscow is deploying advanced S-400 anti-aircraft missile systems to Syria.

Putin may calculate that the threat that Russian forces could launch these missiles will deter Turkish aircraft from firing on Russian jets flying near the Turkish-Syrian border. But if President Erdogan is as insistent on pursuing Turkey's right to defend Turkish airspace as Putin is about pursuing Russia's right to fly over Syrian territory at the request of Syria's "legitimate" government, an incident could well occur in which a Russian missile hits a Turkish aircraft in Turkish airspace near the border. And in that Turkey is a member of NATO which the alliance is committed to defend, the implications of such an event are quite ominous indeed.

Another danger arising from the conflict in Syria (albeit whether or not Russia is bogged down in it) is that continued outflows of refugees could overwhelm neighboring countries such as Jordan and Lebanon, as well as increase the burden faced by Turkey and Europe. Nor does Putin have much incentive to help resolve this problem. If the West is content to allow Russia to incur the costs of a prolonged, fruitless intervention in Syria, Putin is hardly going to act to mitigate the high costs that Europe and Syria's neighbors pay in terms of dealing with Syrian refugees. Indeed, he may even calculate (however unrealistically) that paying these costs will eventually force them to support Russian efforts in Syria as the only way to end their having to do so.

The problem for Washington, then, of pursuing a strategy of allowing Russia to waste its resources and weaken itself through its military intervention in Syria is that America cannot immunize itself and its friends and allies either from the risk of the conflict spreading or from the negative effects of the continuing outflow of Syrian refugees.

First, Washington urgently needs to work to prevent the escalation of conflict between Turkey and Russia. Steps that might be taken include reiterating NATO's commitment to the defense of Turkey while at the same time encouraging Ankara to find other ways of responding to Russian violations of Turkish airspace than shooting down Russian aircraft. Since Moscow values its strong trade ties with Ankara, Turkey's joining America and the EU in imposing economic sanctions on Russia would hit Putin hard. Washington could also help Turkey seek alternatives to Russia for gas supplies.

In addition, America and its wealthier allies both in Europe and the Middle East need to greatly increase their assistance to Turkey, Jordan, Lebanon, and certain European countries in accommodating Syrian refugees. This must not be regarded just as a humanitarian imperative, but as a security one as well. Putin's being bogged down in an unwinnable conflict in Syria, after all, will be little consolation to the U.S. if fragile states in Jordan and Lebanon collapse under the weight of more and more Syrian refugees.

The bottom line is this: Allowing Russia to get itself bogged down in an unwinnable quagmire in Syria that America stays out of still poses important costs and risks for America and its allies that Washington must guard against or mitigate. Simpson is undoubtedly right in pointing out that just because Moscow insists on making costly mistakes in Syria, Washington does not have to do so too. Unfortunately, the consequences of the mistakes made by others may not be limited just to them, especially if these consequences are not guarded against.

About The Author (Mark N. Katz):

Mark N. Katz is a professor of government and politics at George Mason University (Fairfax, Virginia, USA). His most recent book is Leaving without Losing: The War on Terror after Iraq and Afghanistan (Johns Hopkins University Press, 2012). Links to his most recent articles can be found on: www.marknkatz.com.

"Putin's Syrian Quagmire: Costs as well as Benefits for the US"