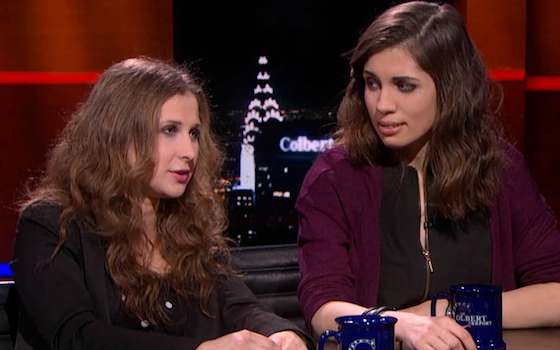 Pussy Riot are now global celebrities. Their cause has been featured in articles, profiles, books and films.

Since the amnesty of Nadya Tolokonnikova and Maria Alyokhina (the third member, Kat Samusevich, was given a suspended sentence on appeal) in late December, they've been appearing at news conferences, posing for fashion shoots and travelled to an award ceremony in Singapore. Their lives have been repackaged into simple cinematic narratives of heroic defiance to Putin's authoritarianism.

Words Will Break Cement: The Passion of Pussy Riot

, by the Russian-American journalist Masha Gessen, looks behind the women's balaclavas to tell a human story. By delving into the fears, aspirations and doubts of Pussy Riot, Gessen demystifies their media caricatures.

Often it seems that Gessen was inside their heads. She almost was. She interviewed their families, friends and lawyers. They gave her letters and legal documents. Gessen sat through most of the trial sessions, and combed through the transcripts of those she didn't. This is Gessen at her best. Shorn of the conspiracy theory of her inferior study of Putin, The Man Without a Face, Words Will Break Cement

is a refreshing, passionate and intimate portrayal of Pussy Riot.

In the opening pages she chronicles a family visit to IK-14, the prison colony where Nadya was housed after her conviction. 'Gera wanted to pee,' are Gessen's opening words. Gera, Nadya's fouryear- old daughter, had spent 11 hours in a car with her father Petya, grandfather Andrei and Gessen. 'Gera, you cannot pee every five minutes!' Petya shoots back.

'When was the last time you saw your mom?' Gessen asks Gera when they have a few minutes alone. 'I don't remember anymore,' she shrugs. 'Why is your mom in jail?' 'I don't even know,' the child shrugs again. 'Who put her there?' Gera shrugs again, 'Putin.' A cramped car, impatient passengers, a family squabble, a child's confusion -- Gessen views these as essential pieces in their complex story.

Pussy Riot's origins lie in Voina, or War, a radical art collective. But their true midwife was the protests of when tens of thousands of Russians went out on to the streets to protest against fraudulent parliamentary elections.

Pussy Riot quickly gained notoriety in Russia through videos of their guerrilla actions. When police arrested several protesters, including Alexei Navalny, the political activist and corruption fighter, Pussy Riot was performing outside the detention centre.

Pussy Riot's actions come across as impromptu. In reality, they were meticulously planned and rehearsed. Nadya, Maria and Kat didn't like taking risks and dreaded arrest. But their performances were nonetheless daring spectacles. As a group they stressed anonymity and used pseudonyms in case of arrest. They were lucky. Despite a few detentions, they were never charged or jailed.

The 'punk prayer' in the the Saviour changed that. The Duma, Russia's parliament, was a first choice, but security was too tight. Nadya and Kat suggested the cathedral to symbolize the close connection between the and the Putin regime. One member, Seraphima, foretold disaster. 'We can't do it in the cathedral. They'll send us to jail,' she said. She dropped out of the action. 'I just can't go to jail. No human being can go to a Russian jail.'

Nadya and Kat pointed to a group of artists who were given suspended sentences for showing art critical of the Church. Plus, they assumed, the times were different. They were wrong.

Their arrest and trial made them global celebrities. At home, a thin layer of Russian society supported them. Overall, however, they received little sympathy from the Russian public. In a Levada poll conducted in , 56 per cent of Russians said that their punishment was 'sufficient.' Only 26 per cent thought it was excessive. Pussy Riot would probably have faded into obscurity if it wasn't for the efforts of the Russian government and the international press. The state's heavy-handedness turned them into political prisoners, and they were photogenic ones at that.

This in no way diminishes the force of their critique of Putinism, nor the fortitude and poise they showed during their trial and imprisonment. Gessen makes a comparison with the show trials of Soviet dissidents. She explains that in dissident trials the defendant refused to recognize the legitimacy of the court while the defence played the legal game to get their sentence reduced. But in Pussy Riot's case, the roles were reversed. Nadya, Maria and Kat's lawyers made political speeches, Gessen writes, while they conducted themselves, especially Maria, as lawyers. Gessen spares few words in criticizing Pussy Riot's lawyers Violetta Volkova, Mark Feigin, and Nikolai Polozov. These 'activist' lawyers ate up the limelight, Gessen asserts, and even tried on occasion to market Pussy Riot. Kat dismissed her lawyer, Polozov, and hired a new one, and received a suspended sentence.

Two-year sentences did not quell Nadya's and Maria's voices. Each challenged their respective prisons by fighting not just for their rights, but that of all the colony's prisoners.

Maria won important concessions and became so troublesome that she was transferred out of the Berezniki colony to one with better conditions in Nizhny Novgorod. Nadya was less successful, but her shocking letter about the prison conditions and hunger strike in Mordovia shed muchneeded light on prison conditions.

Pussy Riot is now a dead project. Any future action will be contrived. Their last video fell flat. Kat is out of the limelight, and Nadya and Maria are starting a prison rights organization, though several already exist in Russia. Maybe their notoriety will bring more attention to the subject. It's more likely that over time they will fade from the limelight. Thankfully, we have Gessen's book to testify that Pussy Riot was more than what the media tells us.

Sean Guillory is a postdoctoral fellow at the and author of seansrussiablog.org

Words Will Break Cement: The Passion of Pussy Riot