The Erosion of the Nuclear Taboo 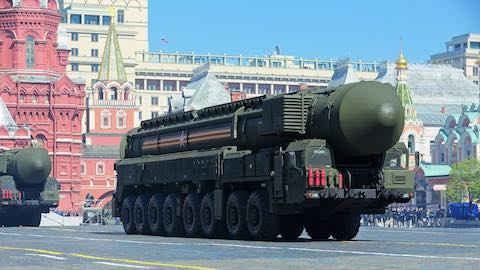 In the context of the war in Ukraine, the world may be entering a more dangerous phase where the use of nuclear weapons by Russia, however localised and limited, emerges as an option.

August 2022 marked the 77th anniversary of the atomic bombing of Japan by the United States. Up to 135,000 people died in Hiroshima on 6 August 1945 and estimates are that a further 80,000 died in Nagasaki three days later. Some have argued that these horrific acts were necessary because they forced the Japanese to capitulate, thereby bringing World War II to a quicker end. This seems to suggest that nuclear weapons may play a useful role during times of war and if this is indeed true, then why haven't they been used ever since? Nuclear weapon states have been involved in many wars since 1945, and yet their leaders have chosen to pursue their objectives through conventional means rather than resorting to these powerful weapons.

Nina Tannenwald has been one of the most vocal advocates of the view that since the 1960s there has existed a moral objection -- labelled the nuclear taboo -- to the use of nuclear weapons. Many historical examples of conflicts between nuclear and non-nuclear states reinforce this. For instance, Britain could have conducted a nuclear strike against Argentina following the latter's invasion of the Falklands Islands in 1982 -- and yet the war was fought using conventional means only. Furthermore, 9/11 represented one of the worst terrorist attacks on its soil, and yet the United States has pursued its War on Terror without resorting to these weapons. While there is no legal mechanism outlawing them, there appears to have developed a powerful objection to nuclear weapon use.

More recently, however, the world has witnessed a blatant violation of sovereignty with the Russian invasion of Ukraine on 24 February 2022.

Since then, there has also been much talk of nuclear weapons, with Russian President Vladimir Putin at the forefront of what have appeared to be increasingly apocalyptic announcements. A few days after the invasion, Putin declared that he was putting his nuclear forces on alert and soon after, Kremlin spokesman Dmitry Pescov announced that Russia would use nuclear weapons if it faced an existential threat. A test of the Satan II on 20 April 2022 -- a nuclear-capable intercontinental ballistic missile able to carry multiple warheads -- represented further evidence of the Kremlin's nuclear sabre-rattling. More recently, Sergei Lavrov, the Russian Foreign Minister, has lamented NATO's provision of arms to Ukraine, claiming that this action is merely "pouring oil on the fire" and bringing the two sides closer to World War III.

There have been even more dramatic statements. Russia's invasion of Ukraine on 24 February was immediately followed by Putin warning the West not to interfere as it would "lead you to such consequences that you have never encountered in your history". The pro-Kremlin Russian State Television has also put forward a steady stream of commentators outdoing each other with statements verging on the apocalyptic. In June, for instance, Vladimir Solovyov warned of a "massive nuclear strike that only mutants would survive" if NATO continued with its support of Ukraine. Panellists have even threatened nuclear strikes on Western cities such as New York and London, as well as suggesting that Finland and Sweden should be targeted for their decisions to join NATO.

We should rightly be concerned about such announcements and developments in Ukraine. However, what is often overlooked is that the nuclear taboo has been under pressure for much longer than the current war. Nuclear weapons have not been used in anger since 1945, and much of today's generation will not be aware of the 1962 Cuban Missile Crisis. Although the nuclear taboo describes a strong moral objection to the use of these weapons, it has not translated into a concrete international mechanism that bans the development or use of nuclear weapons. Their immense destructive power may encourage states to pause before resorting to their use, but it is unlikely that such moral objections would deter non-state actors such as terrorist groups. Such facts have meant that humanity's collective memory of the dangers of these weapons is fading and a dangerous condition akin to amnesia is now developing.

Nuclear deterrence, however, remains in place and a nuclear war between Russia and NATO is unlikely. Russia would face an existential threat if it attacked any NATO state and as far as the United States is concerned, the war in Ukraine remains a regional conflict which only peripherally impacts on American interests. It is therefore very unlikely that, in its support of Ukraine, the US would risk any serious escalation that could lead to a direct confrontation with Russia. Any nuclear strike by Russia would also transform it into an international pariah, universally feared and hated. What is less certain, however, are Russian actions should it begin to incur major losses on the battlefield. In recent weeks Ukraine has achieved the unthinkable and it has reversed significant Russian gains. The question now is how Russia will respond? The global conversation is slowly but steadily turning to the possibility of Russia's use of tactical (battlefield) nuclear weapons in Ukraine.

While a nuclear war between NATO and Russia is unlikely today, Western and Russian media have both prominently raised the spectre that nuclear weapons could be used in a possible future conflict. Much of the blame has been levelled against Russia given its aggression in Ukraine. However, while there is little to dispute the uncertainty surrounding Russia's actions, the world should not ignore the premise that the nuclear taboo has been disappearing for some time now, and that a significant responsibility for this lies with the United States.

During the Cold War, nuclear weapons provided the United States and the Soviet Union with a way to deter each other. However, in addition to this, their role extended to "warfighting" whereby the two states demonstrated their resolve to rely on these weapons for their security. This provided both states with a reason to significantly increase their arsenals, thereby not only infusing a sense of caution into their dealings with each other, but also reinforcing the mutual understanding that any confrontation needed to be actively avoided. Arms control negotiations, therefore, were generally successful, with agreements such as the 1963 Limited Test Ban Treaty, the 1968 Nuclear Non Proliferation Treaty and the all important Anti- Ballistic Missile Treaty of 1972.

The end of the Cold War ushered in significant changes as regards US security policy. The collapse of the Soviet Union persuaded the US president, Bill Clinton (1993--2001), that the importance of nuclear weapons had diminished and therefore the US might be able to rely on a smaller arsenal for its security. This also meant that, for Clinton, the warfighting role of nuclear weapons had diminished, although the weapons continued to fulfil their role of deterring other nuclear weapons states. Consequently, while continuing to rely on nuclear weapons for US security, the Clinton era was characterised by further efforts at arms control, including an attempt to advance the stalled talks on the Comprehensive Test Ban Treaty.

The departure came with Clinton's successor, George W. Bush (2001--2009), who saw his predecessor's attitudes towards encouraging arms control as being outdated and unable to manage the myriad threats facing the United States -- especially after 9/11. Consequently, the Nuclear Posture Review of 2002 brought major changes to Clinton's nuclear strategy in that it specified the need to respond to a major perceived increase in the threat from weapons of mass destruction and proliferation.

Bush became committed to highlighting the multiple threats facing the United States and consequently shifted the focus from the specific to a broader range of threats and how they might be prevented. The warfighting role of nuclear weapons was once again revisited and the administration also put forward scenarios where nuclear weapons could be used pre-emptively including against China, Russia, Iraq and North Korea, as well as in support of Israel during a possible war with its Arab neighbours. Bush used the occasion of his West Point Speech (June 2002) to emphasise the more muscular aspects of his doctrine. His statement, "We must take the battle to the enemy, disrupt his plan, and confront the worst threats before they emerge" clearly indicated that pre-emption, even with nuclear weapons, could well be an option.

Mutual Assured Destruction was no longer to be seen as the only mechanism upon which US security rested. Instead, a broader view of deterrence emerged whereby it was now stressed that the US needed to discourage and defeat a much wider range of opponents that threatened its hegemony. Under Bush, the Cold War triad of land, sea and air based nuclear systems expanded to include a broader range of options from large nuclear weapons to much smaller ones, but also with a much stronger reliance on advanced conventional weapons and missile defence systems.

It is in this context that Bush's unilateral withdrawal from the all-important Anti-Ballistic Missile Treaty should be seen. Signed in 1972, the purpose of the treaty was to prevent the two Superpowers from building even more nuclear weapons in order to preserve the essence of deterrence. Bush claimed that the treaty was outdated and that it prevented the US from building effective missile defence systems in order to protect it from rogue nuclear states. However, critics viewed the withdrawal as a mistake given that it was likely to damage the goal of preventing nuclear proliferation as well as increasing tensions with nuclear rivals -- Russia and China.

Most importantly, these actions had the effect of diminishing the incentive among nuclear armed states to engage in any meaningful arms control and non-proliferation activities. The accelerating arms race between India and Pakistan, North Korea's numerous nuclear threats, and negotiations with Iran over its enrichment of uranium are indicative of the difficulties faced by the nuclear non-proliferation regime. Indeed, the concern over the use of nuclear weapons during the current crisis in Ukraine comes at the end of two decades of stagnation over the issue of these weapons and there is now a renewed sense of urgency.

As the war in Ukraine has unfolded even those who have supported Russia -- the Chinese for instance -- have begun questioning Putin's policies, especially given that Ukraine has succeeded in reoccupying parts of its own country. The implications of this need to be taken seriously, especially in terms of what Putin's next move might be. How likely is it that he may resort to using battlefield (tactical) nuclear weapons in order to halt the Ukrainian advance, and if he does, how will NATO respond? An added complication is that Russia has launched referendums in Luhansk, Donetsk, Kherson and Zaporizhzhia and although they have been denounced as a sham, the worry is that Russia has now annexed these regions and it may resort to nuclear attack against Ukraine if there is an attempt to reclaim these areas. Mutual Assured Destruction may continue to operate and thereby prevent a large nuclear exchange between the West and Russia, but the use of tactical weapons by Russia on Ukraine's frontlines cannot, for the moment, be precluded.

The concern that nuclear weapons could be used in Ukraine, and the process leading to the erosion of the nuclear taboo, are intimately connected. As this article has argued, this process began many years before the Russian invasion of Ukraine and it is not sufficient to simply lay the blame at the doorstep of the Kremlin. The West, and in particular, George W. Bush, played a major role in encouraging this erosion. As a consequence, the world may be entering a more dangerous phase where the use of nuclear weapons, however localised and limited, emerges as an option. Even the use of a single tactical nuclear weapon will consign the nuclear taboo to the dustbin of history.

Dr Shahin Malik is a Senior Lecturer in International Relations at London Metropolitan University. He completed his PhD at Birmingham University.