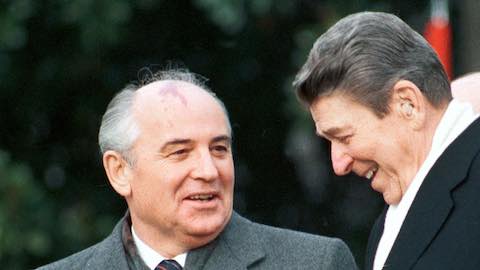 Mikhail Gorbachev's legacy is complex, but perhaps his greatest achievement will be that he contributed so manifestly to a spirit of peace at a vital time in world history.

Mikhail Gorbachev's death occurs at a time when that barometer of happenstance has rarely registered such criticality, and as the incumbent Kremlin leader is determined on destroying much his predecessor achieved. Widely acclaimed in the West, but reviled by many at home, Gorbachev took power in 1985. He exposed the Soviet Union to the world while reforming at home and ultimately helped bring the Cold War to a peaceful end.

UN chief António Guterres acknowledged he "changed the course of history &ellips a one-of-a kind statesman &ellips The world has lost a towering global leader, committed multilateralist, and tireless advocate for peace." Russian President Vladimir Putin expressed his deepest condolences via his spokesman Dmitry Peskov. US President Joe Biden praised him as a, "rare leader &ellips a unique politician who had the imagination to see that a different future was possible despite the Cold War". European Commission President Ursula von der Leyen hailed him as a "trusted and respected leader who opened the way for a free Europe". UK Prime Minister Boris Johnson noted: "In a time of Putin's aggression in Ukraine, his tireless commitment to opening up Soviet society remains an example to us all."

Gorbachev is seen in the West as an architect of reform who created the conditions for the end of the Cold War. Internationally he reached arms control deals with the US, declined to intervene when eastern European nations rose up against Communist leadership and ended the Soviet war in Afghanistan. Meanwhile, his policy of glasnost, or openness, allowed people to criticise the government in ways that were previously forbidden. However, it also unleashed nationalist sentiments which contributed to the Soviet Union's eventual collapse. Gorbachev's programme of reforms had not been intended as a political maelstrom. His intention had been to revive his country's stagnant economy and overhaul its political processes.

The break-up of the USSR is often watermarked by the citizens of East Germany, perhaps the most hard-line of the Soviet satellites, crossing into West Berlin. And, when doing so, contributing to the dismantling of the Berlin Wall in late 1989. Underlining his character, Gorbachev's reaction was not to send in tanks, the traditional Soviet impulse, but to announce that reunification of Germany was an internal German affair.

Yet, a closer examination reveals a more complex figure. For example, when Gorbachev visited Beijing in 1989, student protesters in Tiananmen Square hailed the Soviet leader as a hero, parading through the streets of Beijing with banners asking "Where is China's Gorbachev?" His work in Moscow, they believed, offered hope for the idea that autocracy could mellow and refrain from violence. That all ended less than a month later with the Tiananmen Square massacre. Gorbachev, who had mostly avoided violence in dealing with protests in the Soviet Union, never publicly condemned or questioned the Chinese Communist Party's decision to call in the military.

In 1990, Gorbachev was awarded the Nobel Peace Prize "for the leading role he played in the radical changes in East-West relations". Underlining the divergence between Gorbachev's popularity internationally and the lack thereof at home, he was soon ousted from power, the Communist Party was outlawed and Russia set out on a new, uncertain, future. Although a pragmatic and rational politician, Gorbachev failed to realise that it was impossible to bring in reforms without destroying a centralised communist system that millions in the Soviet Union and beyond no longer wanted.

In light of Russia's invasion of Ukraine, Aleksei Venediktov noted that Gorbachev's democratic achievements, which were "his life's work", "are now in ashes". Gorbachev was still in power when Venediktov's liberal radio station, Echo of Moscow, first went on the air in 1990 -- and it came to symbolize Russia's newfound freedoms. After Putin ordered troops into Ukraine in February 2022, the Kremlin forced the radio station to shut down. Additionally, Novaya Gazeta — the independent newspaper that Gorbachev used his Nobel Peace Prize money to help found in the early 1990s — was forced to suspend publication in March when it was threatened by a wartime censorship law. Gorbachev himself, in ill health, said little publicly about the invasion.

Gorbachev's vision of a "common European home" stretching from Vladivostok to Lisbon has been replaced by a Russia increasingly isolated from the rest of Europe. Like most great leaders, Gorbachev dies both loved and hated, but perhaps his greatest achievement will be that (as recognized by the Nobel Committee) he contributed so manifestly to a spirit of peace at a vital time in world history.

Martin Duffy has participated in more than two hundred international election and human rights assignments since beginning his career in Africa and Asia in the 1980s. He has served with a wide range of international organizations and has frequently been decorated for field service, among them UN (United Nations) Peacekeeping Citations and the Badge of Honour of the International Red Cross Movement. He has also held several academic positions in Ireland, UK, USA and elsewhere. He is a proponent of experiential learning. He holds awards from Dublin, Oxford, Harvard, and several other institutions including the Diploma in International Relations at the University of Cambridge.

Mikhail Gorbachev's Legacy and the Spirit of Peace