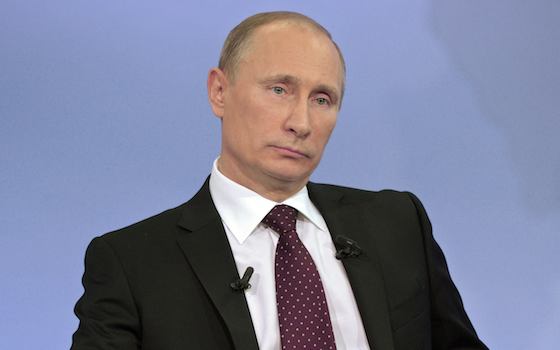 Vladimir Putin, with the aid of his vast propaganda machinery, has convinced many Russians that the interim government in Ukraine is expressly Nazi and fascist. And while there were some neo-Nazi goons among the protesters who brought down the corrupt government of Victor Yanukovich, and there are definitely ultranationalists among the coalition resisting Moscow, it's simply a transparent lie that the current government is fascist.

That hasn't stopped some left-wing writers and crackpots in the West from buying the Russian claim that the United States is in cahoots with a "fascist junta" in Ukraine.

This is a very old story. Josef Stalin championed the idea that all of his political opponents should be dubbed fascists, including many of his fellow Bolsheviks, such as Leon Trotsky (whom Stalin had assassinated), and much of the Red Army's officer corps (whom he had executed) and countless Ukrainians (whom he had liquidated). Stalin insisted that even mentioning the man-made Ukrainian famine -- i.e., Stalin-made -- was evidence you were an agent of the Nazis.

Under Stalin's "theory of social fascism," any socialist, social democratic or progressive group or party not loyal to him had to be called fascist. Hence, for a while Moscow insisted that FDR and even Norman Thomas (head of the ) were fascists.

Ultimately, communist propagandists and their allied intellectuals would reflexively blame fascism for everything, regardless of the facts. That's what prompted George Orwell to remark that "the word fascism has now no meaning except in so far as it signifies 'something not desirable.'"

It's been fascinating to watch as Putin, an ex-KGB man, revives this trope, particularly given that his own behavior is so generically fascistic. Putin is a corporatist (the economic doctrine of fascism). He's a dictatorial, charismatic leader who bends church, business, labor and media to the needs of a centralized state under a thoroughly nationalist banner. As Cathy Young writes for RealClearPolitics, Putin is nurturing his own cadres of ultra-right goons in Ukraine and elsewhere.

Of course, Russia's propaganda campaign hinges on more than the use and abuse of the "F-word." It's been lying about all manner of things, manipulating events on the ground and doctoring images on the airwaves.

It would be nice if this revival of KGB-style deceit caused some soul-searching in the West about other lies and distortions disseminated by the Soviets.

We get the word "disinformation" from the Russian "Dezinformatsiya," the name of the KGB division charged with propagating deliberate lies around the world. They were very good at it.

To be sure, we have our homegrown nuts, but the Soviets fertilized and cultivated the crop at every opportunity. Immediately after the assassination of John F. Kennedy, the Soviets went into overdrive nurturing "independent" writers such as former German communist Joachim Joesten. His "Oswald: Assassin or Fall Guy?" was the first book on the murder, appearing before the issued its findings. Joesten "discovered" that Kennedy was killed by the CIA, of course.

When the Mitrokhin archives -- the files of a defector KGB librarian -- were opened in the 1990s, we learned that Joesten was funded by the KGB. These and similar efforts have distorted the way we talk about the Kennedy assassination and, subtly, our society. You could say that Oliver Stone is like the proverbial Japanese soldier who doesn't know the war is over. Stone's movie "JFK" was a natural extension of the KGB line (right down to the smear that J. Edgar Hoover was a transvestite).

In the 1980s, the Soviets deployed vast resources to propagate the lie that the U.S. created AIDS as part of a biological warfare program. In the first six months of 1987, some 40 newspapers in developing countries ran the story.

It's impossible to know how much of the anti-American narrative contains KGB DNA. Howard Zinn and I.F. Stone would not have been conservative cheerleaders even if the Soviet Union never existed. But Putin's war on the truth in Ukraine is simply the latest battle in a very old war.