Obama in Denial on Russia 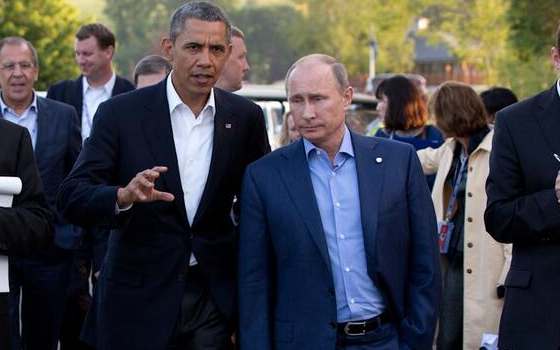 Things are moving far too fast in Kiev, Moscow and Crimea to write about events there. But the past isn't going anywhere. Though you wouldn't know that from the way the Obama administration talks about it.

Throughout this crisis -- indeed, throughout all of Barack Obama's presidency -- the has been eager to insist that our long, unpleasant history with the Russians is behind us.

Obviously, every administration wants a fresh start with long-time rivals. That's why there have been four "resets" with the Russians since 1991, including George W. Bush's famous soul-searching gaze into Vladimir Putin's eyes and Hillary Clinton's comic effort to give the Russians a "reset" button (that actually said "overcharge" on it).

Fresh starts are fine. But when Obama came into office, his administration implicitly blamed our poor relationship with Russia on Bush, as if Russia's misdeeds were provoked by America.

In 2012, Obama mocked Mitt Romney for his claim that the Russians are our "No. 1 geopolitical foe," and scoffed: "The 1980s are now calling to ask for their foreign policy back."

That scorn looks embarrassing enough given recent events. But the truth is Obama's hostility to Romney's policies had little to do with them being outdated. Obama didn't like America's Cold War policies during the Cold War.

In 1983, then- student Obama penned a lengthy article for the school magazine placing the blame for U.S.-Soviet tensions largely on America's "war mentality" and the "twisted logic" of the Cold War. President Reagan's defense buildup, according to Obama, contributed to the "silent spread of militarism" and reflected our "distorted national priorities" rather than what should be our goal: a "nuclear free world."

Of course, it's unfair to put too much weight on anyone's youthful writings. Except there's precious little evidence his views have changed over the years.

In his first term, President Obama's biggest priority with Russia was to get the two countries on the path to that "nuclear free world." One of his -- and Secretary of State Hillary Clinton's -- first actions in office was to betray our commitments to Poland and the Czech Republic on missile defense.

Indeed, across a wide range of areas, it has been Obama who has been, in the words of The Jackson Diehl, in a 1980s-soaked "foreign policy time warp."

Two weeks ago, in response to tensions in Ukraine, the president explained that "our approach ... is not to see (events in Ukraine) as some Cold War chessboard in which we're in competition with Russia." This is a horrible way to talk about the Cold War because it starts from the premise that it was all just a game conducted between two morally equivalent competitors.

Similar comments about "Cold War rivalries" and the like are commonplace of late, particularly during the Sochi Olympics, when commentators were desperate to portray the entire Soviet chapter as nothing more than a "pivotal experiment."

My old boss, William F. Buckley, responding to claims that the U.S. and the Soviets were morally equivalent, said that if one man pushes an old lady into an oncoming bus and another man pushes an old lady out of the way of a bus, we should not denounce them both as the sorts of men who push old ladies around.

While America surely made mistakes during the near half-century "twilight struggle," the simple fact is that there was a right side and a wrong side to that conflict, and we were on the right side of it. The Soviet Union murdered millions of its own people, stifled freedom in nearly every form, enslaved whole nations and actively tried to undermine democracy all around the world, including in the U.S.

President Putin, a former KGB agent, has said that the collapse of the evil empire was "the greatest geopolitical catastrophe" of the 20th century. That alone should have been a clue to this that misspelled reset buttons weren't going to cut it. But they were too stuck in the past to see it.

"Obama in Denial on Russia"