Obama's Diplomatic Dance with Putin is a Sad Sock Hop 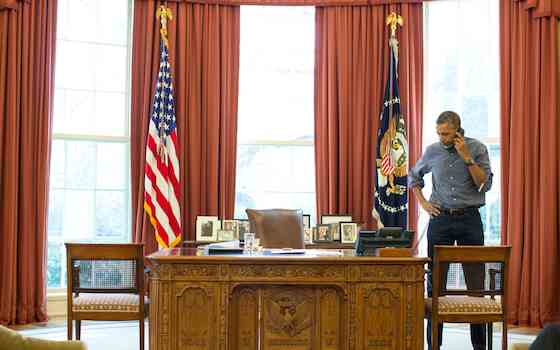 Obama's Diplomatic Dance with Putin is a Sad Sock Hop

President Obama is right. He told Major Garrett of this week that "Mr. Putin's decisions aren't just bad for Ukraine. Over the long term, they're going to be bad for Russia."

I believe that Putin's adventures in Russia's "near abroad" are a mistake. Indeed, they are part of a whole tapestry of wrongheadedness. It's also bad for the Kremlin to crush dissent, censor the news and hobble the economy by handing it over to oligarchs and a kleptocratic bureaucracy. Putin's scapegoating and demonizing of gays isn't only morally wrong, it's not in Russia's long-term interests either. That Putin prefers to use his oil and gas assets as a political weapon abroad and an excuse not to diversify his economy at home has me Googling the Russian word for "boneheaded."

But here's the thing: Putin disagrees. And on the matter of Ukraine -- like so much else -- he is immune to persuasion. All of the condemnations, communiqués, joint statements and other diplomatic lamentations, not to mention the late-night bull sessions on the phone with Obama, will not shake him from his views of what is best for Russia.

Obama seems to think that's what he's been doing. He told , "Each time Russia takes these kinds of steps that are designed to destabilize Ukraine and violate their sovereignty, there are going to be consequences."

Unfortunately, the credibility of Obama's "consequences" took a big hit when he was unwilling -- or unable -- to make good on his vow that the use of chemical weapons in Syria would amount to a "red line" for the U.S.

And then there are the consequences Putin has already faced as a result of his annexation of Crimea. The Obama administration did impose sanctions targeted at a few of Putin's henchmen and cronies. They publicly laughed them off, but it was worth a try.

Beyond that, though, Obama's consequences haven't even been inconsequential; they've had the opposite of their intended effect. Rather than send the Ukrainians weapons or useful intelligence, we sent them a bunch of MREs ("Meals Ready to Eat"). And even that we were unwilling to do in too provocative a way. We didn't use cargo planes, but rather sent the snacks in by civilian trucks. Meanwhile, pleas from allies to deploy more assets to Poland and other front-line states were rebuffed by the .

On , reported that the was still weighing requests from the Ukrainian government for other supplies such as "medical kits, uniforms, boots and military socks."

"You want to calibrate your chest-thumps," a senior military official told the Journal, explaining this step-by-step approach. "He does something else in Ukraine, we release the socks."

Now, imagine you are Vladimir Putin. You illegally sent Russian soldiers without military insignia into Ukraine (a major violation of the Geneva Conventions). You lied about doing so at the time (Putin has since boasted that he did exactly that). And your aide brings in the news that a "senior military official" of the United States has announced that if you take another step toward carving up Ukraine, the U.S. will be forced to give the Ukrainians the socks they've been asking for.

Call me crazy, but I doubt the response will be "Comrades! Call it off! We can't take the chance that the Ukrainians will have warm, dry feet when we invade Kiev!"

Consequences that are not sufficiently painful or sufficiently scary aren't consequences in the sense Obama means at all. They're invitations. It's like trying to get a bear to leave you alone by throwing salmon at it.

I entirely understand that Americans are war-weary, and for good reason. But has it really gotten to the point where the U.S. military now defines "chest-thumping" as unleashing the socks of war?

"Obama's Diplomatic Dance with Putin is a Sad Sock Hop"