Obama's Cool-headedness is Diplomacy, Not Appeasement 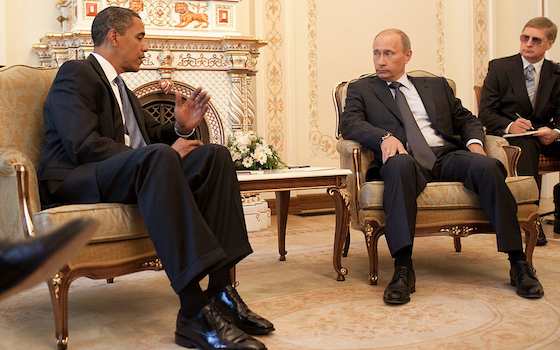 To hear some American hawks talk about President Obama's reaction to the Russian move into Crimea, you'd think he's grabbed Neville Chamberlain's umbrella of appeasement and rushed off to Munich.

But Obama's response to Russian President Vladimir Putin's power move in Crimea can hardly be compared to the British prime minister's fateful surrender to Adolf Hitler's blatant theft of the Sudetenland from Czechoslovakia in 1938.

Chamberlain was an open advocate of appeasement before it became a dirty word. He thus was easy prey for Hitler in what already was emerging as the Nazi strongman's determination to achieve German domination of Europe. The worst that can reasonably be said of Putin at this stage is a dream to restore some semblance of Russia's old power as the center of the old Soviet Union.

Obama, in calling on Putin to return his military forces to their established bases in Crimea, is following his own established foreign-policy reliance on collective action within the Western community. It includes employing and UN economic entities to pressure the Russian boss to back off. Instead of repeating his careless talk toward Iran and Syria of setting red lines not to be crossed, the president so far remains committed to the diplomatic course, as he should.

It is clearly within the interest of the United States to work for a resolution of the current crisis as a concerned party, not as a breast-beating adventurer, as was the case in Iraq in 2002-03. We're still paying the price of that misguided run-up to the American invasion based on flawed assumptions and intelligence.

Perhaps Obama can be faulted for again substituting talk rather than immediately imposing tough sanctions against the Russian economy for the Crimean caper. But there is no stomach at home, either, for any U.S. military involvement in what obviously is Russia's area of influence.

The swift dispatch of Secretary of State John Kerry to Kiev, and the prospect of early congressional action on more economic aid to the new regime there, have already underscored the Obama administration's focus on hewing to diplomacy in the crisis.

Zbigniew Brzezinski, national security adviser in the Jimmy Carter administration, has written in the that that Obama should reaffirm "the West's desire for a peaceful accommodation with Russia regarding a joint effort to help Ukraine recover economically and stabilize politically."

Specifically, Brzezinski writes, "the West should reassure Russia that it is not seeking to draw Ukraine into or to turn it against Russia." Such a declaration would be a step in returning to the administration's earlier aspirations to "resettle" relations with Moscow that have gone off track during the Putin regime.

At the same time, if only for personal political reasons, Obama cannot afford to be painted by his partisan foes at home as a Chamberlain clone. He already is being criticized for the slow pace of Syria's pledged dismemberment of its chemical weapons.

But it should be remembered that it was Obama's threat to take military action against Syria to get rid of those weapons that brought about that pledge, and a start to the process. Still, the American president fuels the Republican allegation that he's a paper tiger in not attacking Syria anyway, in response to Bashar al-Assad's wholesale slaughter of his own people.

In a real sense, the crisis in Crimea has generated another opportunity for the unrelenting campaign to stymie Barack Obama's presidency and discredit him as a capable and competent leader. But his notable unflappability serves him well in the current international flare-up, at least among Americans not itching for a return to the Cold War of yesteryear, let alone the dark days of Munich, 1938.

The pact of appeasement that Chamberlain waved failed to deliver his promised "peace in our time." What Obama is doing now is firmly following Theodore Roosevelt's admonition to "speak softly and carry a big stick," with a better prospect of averting another international catastrophe through level-headed diplomacy.

"Obama's Cool-headedness is Diplomacy, Not Appeasement"