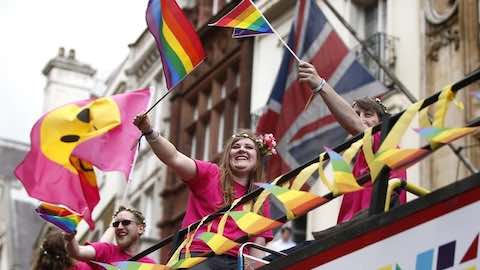 The Top 100 Employers list by the rights charity Stonewall ranks organisations in Britain based on answers from employees about culture, diversity and inclusion in the workplace.

Stonewall praised Lloyds, which came second in the last year's index, for featuring a same-sex marriage proposal in their advertising and becoming the first UK-owned company to extend private healthcare policy to transgender people.

Lloyds Banking Group Chief Executive António Horta Osório said the company was committed to supporting diversity in its workforce "so that we can harness all of the qualities and talents of our colleagues".

According to the survey, one in eight lesbian, gay and bisexual people would not feel comfortable disclosing their sexual orientation to managers or senior colleagues.

It was even higher among transgender employees with one in five stating that they would not feel comfortable disclosing their gender identity to any of their colleagues.

More than 92,000 employees from 439 organisations -- the highest number in the index's 12-year -- took part in the survey which serves as a tool for employers to evaluate their progress on LGBT equality.