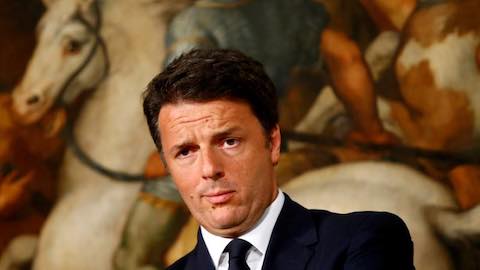 He's rude about Brussels, calls Berlin stingy with cash and Paris mean on helping refugees; he threw a tantrum this month that broke a summit facade of EU unity after the shock of Brexit. There is plenty about Matteo Renzi, Italy's 41-year-old prime minister, for fellow European Union leaders to dislike.

Yet German Chancellor Angela Merkel, French President Francois Hollande and others fret that he could be undone by the constitutional referendum he has set for Dec. 4. This would raise new questions about Italy's stability just as Rome has taken a turn in the sun of EU attention following the British departure.

Polls show the vote on streamlining legislation could go against him. Renzi's wellwishers in the north have been relieved that he has gone quiet on threats to resign if he loses but are concerned that defeat will further hobble efforts at reform.

"If Renzi gets through this referendum, it would be a huge step forward," said Merkel ally Gunther Krichbaum, chair of the parliamentary European affairs committee. But, he told Reuters: "If he doesn't get through it, Renzi will be badly damaged."

In conversations with officials and policymakers around the EU, Reuters has found little sense of alarm that defeat in the referendum could trigger a political or economic crisis in the euro zone's third biggest member.

Yet there is concern that it would blunt hopes of reviving growth in Italy. It could also hinder a more dynamic partnership with Paris and Berlin to bolster the post-Brexit EU against eurosceptic parties gaining votes, not least ahead of elections in France and Germany next year.

"If he doesn't pull it off, Renzi will be weakened but it's reasonable to think he can stay as prime minister," a senior French diplomat said. "But there would be institutional deadlock and so uncertainty on making progress on reforms in Italy."

In common with many Italian observers, others in the EU play down the chances of Renzi's leading opponents, the insurgent 5-Star movement of comedian Beppe Grillo, turning a referendum victory into executive power, at least before elections in 2018.

Even if Renzi resigns, they believe allies could continue to pursue his policies for two more years. 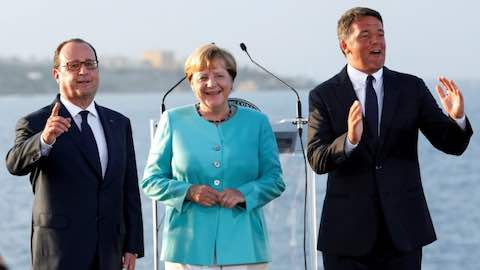 A senior EU official said a flurry of contacts among the three big founders of the Union since its No. 2 economy Britain voted in June to leave had created expectations that Renzi could add a vital spark to Franco-German cooperation.

This could deepen the Union that has stuttered as the French economy has struggled and Paris and Berlin have diverged on how to bolster the euro zone.

"We have started to see, after a long time, a German-French motor with a very strong Italian engine," the official said.

"We want this trio. We cannot lose Renzi."

But in a month, he has gone from hosting Hollande and Merkel to issue a joint call to arms to save the Union after Brexit to a display of fury after a summit of all 27 remaining EU leaders in Bratislava. He said they ignored his demands and complained that Merkel and Hollande had shared a podium there without him.

Defending his outburst, Renzi later told an interviewer: "I'm not going to stay silent for the sake of a quiet life."

He once angered the EU executive by denouncing them as 'technocrats and bureaucrats without a heart or a soul', yet despite the unwelcome public petulance, Paris, Berlin and Brussels have quietly absorbed his anger and said little.

"His political life is at stake. That's why he's kicking and screaming and biting the EU, Merkel and the rest -- to avoid 5-Star taking power," a second senior EU official said. "No one's surprised or upset because we all know what the alternative is."

"We shouldn't make too much of it," agreed Krichbaum, noting Renzi is unusually young to be prime minister of a major state. But he warned that he should rein in his "Germany bashing" on budgets if he is to avoid Berlin confronting Rome as forcefully as it did Greece's left-wing government in the past year.

Other German officials said the conservative Merkel sees the socialist premier as her best hope in Italy and is going out of her way to be helpful to him. She has as defied hawks in her own party to call for Italy to be given more EU fiscal wiggle room to deal with an influx of migrants and last month's earthquake.

But Merkel's room for maneuver is limited by the threat the eurosceptic AfD poses to conservative seats in a parliamentary election in a year. Allies' disquiet at her embrace of not one but two southern socialists was why, French officials believe, Merkel shared a platform at Bratislava with Hollande alone.

"We'll have to do something again with Renzi," the French diplomat said. "He simply mustn't feel we've abandoned him."

In Berlin, however, Krichbaum cautioned that Merkel could not move too far toward Renzi on such issues as fiscal leniency or bringing more refugees to Germany. "The government of course has an interest in Renzi succeeding with his reforms," he said.

"But it is always a fine balance and we shouldn't lose sight of our own domestic political situation. Because if we let up on reform in the euro zone ... that will strengthen ... the AfD."