Italy's Far Right Rode Inequality to Victory, But Has No Answers for It 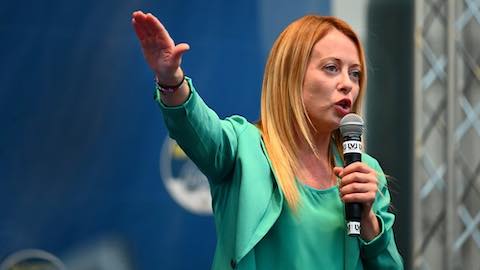 A let-the-rich-be government has opened the doors to the smiling heirs of Italy's neofascist factions.

In any unequal society becoming substantially more unequal, democratic forces better directly address that growing inequality. Or else get prepared to face the consequences.

In Italy, established democratic parties have spent years leaving that inequality unaddressed. Now they're facing those consequences. This past Sunday, just a few weeks shy of the 100th anniversary of our modern world's first fascist putsch, Italian voters gave a smashing triumph to a party with deep roots in the neofascist movements that emerged after the fall of Benito Mussolini, Italy's first fascist head of state.

Italy's new leader, Giorgia Meloni, in no way stylistically resembles Mussolini. She comes across as smiley and perky, a far cry from the dour Mussolini we see in all those old grainy newsreels. No goose-steps with Meloni. But she's promoting the essential heart of the core neofascist political playbook. Her Fratelli d'Italia party — "Brothers of Italy" — has been steadfastly ignoring the growing economic divides that poison Italy's future and scapegoating the country's most vulnerable instead.

The media-magnet Meloni has been taking a grinning victory lap this week to celebrate her electoral triumph, and a sweeping triumph she has certainly scored. In the new Italian parliament, Fratelli d'Italia and its two smaller partner parties may end up with about triple the legislators connected to its center-left opposition.

But a closer look at the elections shows no massive public roar of approval for a neofascist-leaning Italian future. What the elections do show: A massive popular frustration with a center-left government unwilling to challenge Italy's increasingly concentrated distribution of income and wealth and unable, as a result, to meaningfully address the needs of average working people.

The clearest sign of that public frustration: the meager election turnout. Only 64 percent of Italians voted, notes Italian political historian David Broder, "easily the lowest" turnout in the republic's entire history. More of those who did vote, observes activist philosopher Lorenzo Marsili, cast ballots for parties in the "liberal-left camp." But the right-wing parties ran as partners while their democratic opposition remained "fractured."

Giorgia Meloni and her fellow Brothers of Italy candidates ran as outsiders to the existing "national unity" government led by Italy's center-left Democratic Party and topped by Mario Draghi, an Italian economist whose work at Goldman Sachs and the Bank of Italy had previously prepped him for the presidency of the European Central Bank. Draghi's government, note analysts at Italy's Forum on Inequality and Diversity, has done essentially nothing significant to confront the nation's swelling maldistribution of income and wealth.

Italy, as Forbes reported this past spring, now sports more billionaires (52) than either France (43) or the UK (49). Italy's top 1 percent overall, add analysts Paolo Acciari, Facundo Alvaredo and Salvatore Morelli, upped their share of the nation's wealth from 16 to 22 percent in the two decades after 1995, at the same time the nation's poorest 50 percent was watching its national wealth share plummet from 11.7 to 3.5 percent.

Draghi's center-left government, points out Morelli, a leader within Italy's Forum on Inequality and Diversity, did initially advance a tepid inheritance tax proposal, but then quickly left the initiative "de facto abandoned." And the center-left Democratic Party, Morelli adds, never challenged Draghi's core perspective that the government, at tax time, should dare not put its "hands in the pockets" of even the richest of Italian households.

That same Democratic Party made no real effort to oppose the widespread right-wing political and media assault on Italy's most substantial anti-poverty effort, the minimum "citizenship income," the reddito di cittadinanza. Nor did the party speak to the needs of young people facing youth unemployment rates that had left nearly 30 percent of Italy's 25-29 age group without either jobs or student status, a level almost twice the European Union average.

Giorgia Meloni's hard-right Brothers of Italy party, meanwhile, campaigned with no answers for the growing economic squeeze on average Italian families. Her winning center-right coalition in Sunday's elections spent the bulk of its campaign effort attacking the lazy "undeserving" poor and promising not to raise taxes on anyone.

Italy's richest can now look forward to lower taxes if Meloni's Brothers of Italy and its allies make good another of their campaign promises: to replace Italy's progressive income tax with a "flat tax" that subjects rich and poor alike to the same modest tax rates.

The political tragedy in all this?

At the activist grassroots level, notes Italy's progressive Forum on Inequality and Diversity, the nation is teeming with a "wealth of ideas and innovations that have been developing within the country's social ferment."

Some of these ideas even made onto the platforms of the center-left parties contesting for votes on Sunday. But these parties "rarely discussed the proposals contained in their own programs or engaged with social and labor entities, with citizens" on the campaign trail, the Forum on Inequality and Diversity points out. They never communicated "passion and hope." They relied instead "on worn-out symbolism and images." They opened the door to a neofascist triumph.

What next for Italian activists?

Many are planning for a November 5 nationwide protest that's evoking the spirit of the worldwide Women's March on the day after Donald Trump's inauguration. These activists will be demonstrating against inequality and for ecological transformation, for decent social services and against violations of fundamental labor and women's rights. Hundreds of local, regional, and national groups have already endorsed the day's agenda.

In the wake of Italy's electoral debacle, many of these same insurgent social forces are also hoping to start building what the Forum on Inequality and Diversity calls a "party of social and environmental justice," a party that can offer Italy's "social ferment" a "democratic space for power-sharing on visions, content, and leadership," a party "capable and brave enough to bring radical proposals for change to European and international negotiating tables."

That vision seems a tall order at the same moment Giorgia Meloni's Brothers of Italy stands poised to remake Italy into a dependable partner for ruling ultra-right-wing European autocrats like Hungary's Viktor Orbán. But Meloni's party, we ought to remember, only polled 4 percent just four years ago, in Italy's 2018 elections. If Italy's grassroots activists blow hard enough together, the political winds can change in ways that no one now expects.