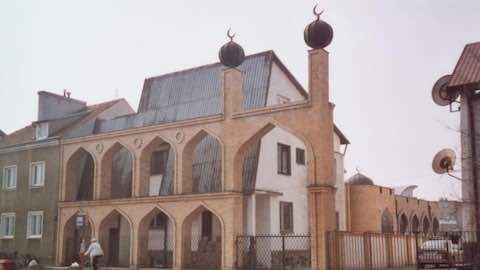 The EU has offloaded migrant rescue operations in the Mediterranean on to merchant ships. (Photo: Noborder Network / Flickr Commons)

Mounting Islamophobia in East-Central Europe can result from indigenous chauvinism and a misreading of history.

The captain of the migrant-smuggling boat that capsized Sunday in the Mediterranean not far from Libya has been charged with multiple homicide. In the New York Times Dan Bilefsky reports that he drove his boat into the Portuguese merchant ship coming to its rescue, though if it's unclear if that was intentional and to what extent it contributed to the actual capsizing.

Why was a merchant ship tasked with a rescue operation? At the Daily Beast, Barbie Latza Nadeau explains: "Maritime law dictates that every vessel must respond to a maritime distress call whether they have rescue equipment or not."

Since Italy's Mare Nostrum search and rescue program ended in November of last year … there has been a 40 percent increase in the use of private merchant vessels to rescue ships in distress. The European Union's Frontex border control program Triton … and relies on member-countries' assets, only has one vessel in the waters right now.

Several merchant ship cooperatives representing the cargo trade in the Mediterranean have signed a petition urging the European Union to send more rescue vessels to patrol the waters.

In a statement, Nadeau reports, they said:

The shipping industry fully accepts its legal responsibility to rescue anyone in distress at sea, but argues it is unacceptable that the international community is increasingly relying on merchant ships and their crews to undertake more and more large-scale rescues. Single ships have had to rescue as many as 500 people at a time, creating serious risks to the health and welfare of seafarers who should not be expected to deal which such situations.

"We have said too many times ‘Never again,'" Federica Mogherini, an Italian who is head of the European Union's top representative for foreign affairs and security, said on Sunday. "Now is time for the European Union as such to tackle these tragedies without delay. We need to save human lives all together, as all together we need to protect our borders and to fight the trafficking of human beings."

Bilefsky in the Times again: "The European Council president, Donald Tusk, has called for a European summit meeting to be held on Thursday to address the issue."

The EU, he continues

… has proposed several preventive measures, including doubling the size of its search-and-rescue operations in the Mediterranean; strengthening the financial resources of the bloc's border agency, Frontex; and ratcheting up the fight against smugglers.

The European Union is also seeking to unify its migration policies, including fingerprinting and recording all migrants and streamlining the application process for asylum.

Those efforts, however, face many challenges at a time when finances in many European Union members are strained and far-right parties across Europe have gained traction, in part by tapping into fear and resentment of immigrants.

Let's hope Nadeau is wrong when she writes:

Getting Europe to agree on a problem each country sees differently is almost impossible.