How to Rein in Putin 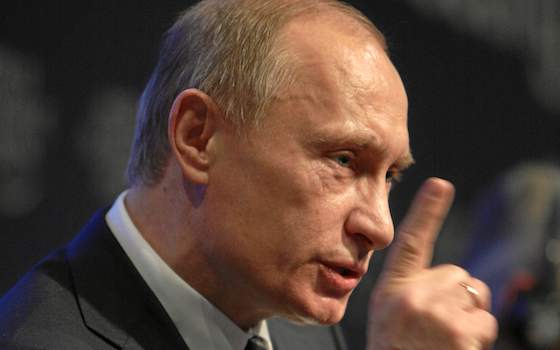 In the aftermath of the Crimean referendum on leaving Ukraine and joining Russia, attention is focused on the efficacy of the West's response in the form of economic and travel sanctions. More important for the longer term is what Moscow will learn from the Western response.

There is no doubt that many in Crimea, perhaps even a majority, are in favour of joining Russia. It could even be conceivable that the reports of a high turnout in the referendum on , and an overwhelming vote for becoming part of the Russian Federation, were a genuine reflection of the true count.

The way the referendum was conducted, however, leaves that question forever open to doubt. The suppression of independent media, the lack of a true choice and the resulting boycott by parts of the population, mean that a chance was missed to establish for certain what those living in Crimea actually want.

Russia, and the pro-Russian parliament in Crimea, had an opportunity to do the right thing. They could have called for and sponsored a referendum that was lawful both under international law and the Ukrainian constitution, and legitimate in giving a voice to all of the Crimean population.

Instead, Russia chose to repeat the Soviet tactics of false legitimization that let it control Eastern Europe after the Second World War by rigging elections. The ingrained habit of deceiving electorates and the international community, rather than respecting and cooperating with them, has ensured that Crimea's accession to the Russian Federation will go down in history as a Russian land grab rather than a democratic choice.

Paying close attention to the short-term problem of the referendum's legitimacy, and how the West should respond to it, risks obscuring a more alarming longerterm trend -- the growing confidence and assertiveness by Russia, and its increased willingness to put the West's strength and resolve to the test by methods which the rest of Europe finds so unacceptable that is entirely unprepared.

Russia learnt from the armed conflict in Georgia in 2008 that the use of military force against neighbours can swiftly achieve foreign policy objectives at little long-term strategic cost. In Crimea in 2014, Russia once again acted in a way that most of the West found unimaginable.

But Russia is not unpredictable; in important ways Moscow displays consistency throughout history. As a result, analysts who study Russia closely can and do predict Russian moves which take Western leaders by surprise.

In particular, how the West handles the current crisis will have a direct effect on whether the new assertive Russia will be deterred from future adventures or provided with yet more encouragement.

The international community's response to the armed conflict in Georgia, including the deeply flawed ceasefire agreement imposed by then President Sarkozy of France, was a mistake that must not be repeated. A report of the time noted that this response would 'encourage [Russia] to ever more direct unilateral action in pursuing their interests'. What is needed now is instead the start of a longer-term strategy for managing Russia and its appetite for military adventure.

This implies a return to the deeply unfashionable concept of safeguarding Europe. In the tacit conversation between the West and Russia, only one side is talking about hard security. Endemic defence cuts in , and the responses to Russian military intervention, risk confirming the Russian suspicion that the West has lost the will to defend Europe -- and perhaps any interest in doing so.

This brings the risk of a future intervention targeting a state ever closer. There is a popular myth that Article 5 of the North Atlantic Treaty obliges nations to react to an attack on any member. In reality, the treaty is meaningless without the political will of Alliance members to take action.

Sanctions, if applied thoughtfully and consistently, have the potential to cost Russia dear, and well-targeted travel bans will emphasize the point. The sanctions themselves, and retaliatory measures by Russia, will also entail costs for Europe, and to some extent the United States.

But these costs should be seen as a down payment on the future investment required to understand, manage and resist Russia. An investment in foreseeing and forestalling Russia's next unacceptable act of force is an investment in the future security of Europe.

"How to Rein in Putin"