How Trump and Brexit United Europe 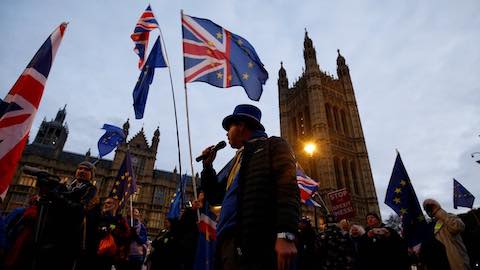 Back in 2016, the Brexit vote and US presidential election seemed like a nationalist one-two punch that could knock out the European Union. Instead, Europen Union support actually rose according to new research.

Europeans across the English Channel are nervously watching Britain's debate over Brexit, fearful of what the United Kingdom's divorce from the European Union will mean for their decades-old economic and political bloc.

British Prime Minister Theresa May on Dec. 11 delayed a parliamentary vote on her Brexit plan, saying it would not pass. So Britain's withdrawal from the EU remains a work in progress, two years after Britons in June 2016 voted to sever economic and political ties.

Back then, many EU observers feared other countries would follow Britain's lead and exit the European Union, weakening the bloc to the point of collapse. And while the financial consequences of Brexit -- whenever it happens -- will surely be felt across the continent, popular support for the European Union may be more resilient than it once seemed.

New research shows that the 2016 Brexit vote actually had a positive effect on European integration, boosting the EU's popularity. Paradoxically, so did the election of Donald Trump as United States president, our polling analysis shows.

Both cataclysmic events were widely expected to increase political divisions within Europe by empowering the EU's nationalist critics.

Instead, after Brexit, Europeans' feelings toward the EU became more favorable, surveys from the Pew Research Center, Bertelsmann Foundation and the European Commission show.

The other two sets of surveys showed similarly positive effects of Brexit on EU support.

Catherine De Vries, author of the Bertelsmann Foundation's study, believes that the the EU's increased popularity may be a rational response to the perceived economic and political costs of exiting the union.

Recent figures suggest that Britain's gross domestic product may shrink by up to 4 percent over the next 15 years, which would result in job loss across the U.K.

The U.K. will also lose any say in EU political affairs -- decisions that will nonetheless effect the country because Britain remains part of Europe even if it's not an EU member. How to secure Ireland's border with Northern Ireland, for example, is now a subject of testy negotiation.

Trump's unexpected electoral victory had a similarly positive impact on EU support, our new study of polling data from the continent reveals.

Comparing a Eurobarometer survey conducted in all EU member states in the four days leading up to the 2016 U.S. presidential election and again during the six days after it, we found that Europeans felt better about the EU after Trump's election.

More than 27,000 people across 28 countries were asked whether and how strongly they agreed with the idea that "the EU is modern," "the EU is efficient," "the EU creates jobs" and other similar statements.

More Europeans replied positively to these questions or felt more strongly about their pro-EU stance after Trump's election.

Before the U.S. presidential election, the Eurobarometer shows, support for the European Union was strongest among people who identified as political centrists, middling among leftists and dismal among rightists.

After the election, right-wing support for the EU jumped way up. In fact, conservatives in Europe rallied around the EU so hard after Trump won that they actually feel more positively now about the union than the left does, almost on par with centrists.

A right-wing defense of European unity

This is a remarkable shift in the EU's political landscape.

Prior to 2016, European integration was predominantly a "cosmopolitan" or elite liberal position. Indeed, that is one of the arguments pro-Brexit campaigners in the U.K. and right-wing European populists use to criticize the bloc.

Though we cannot say with certainty what rationale underpins the new right-wing support for the EU, our analysis indicates that European conservatives did not suddenly take a hard leftward turn after Trump's election.

More plausibly, European conservatives may be rallying around the European Union in response to a perceived external threat: a new U.S. president who puts "America first."

Trump's attacks on the EU and European leaders could have shifted the "us versus them" categories in the minds of Europe's right-wingers, such that Europe now feels like the community -- or "nation" -- that needs defending.

Perhaps conservatives envision reshaping the bloc in the Trump or Brexit model -- as a closed, inward-looking power that can compete with Trump's America and other world powers.

Did Trump and Brexit engender some new brand of "European nationalism"? Or did they simply bring the financial and economic benefits of EU membership into clearer focus?

We don't know, exactly. Perhaps both reactions combined to expand and reshape European unity. How that happened would be a fruitful subject for future research by both psychologists and political scientists.

Though nascent, our conclusions should hearten those who fear that Brexit will unravel the European Union. If and when Britain does exit the EU, a similar rally effect is likely to occur.

Whether the good feelings about European integration will last -- and what they mean for the future of the union -- is not yet clear.

Photo: An anti-Brexit protester speaks during a demonstration. Reuters/Henry Nicholls