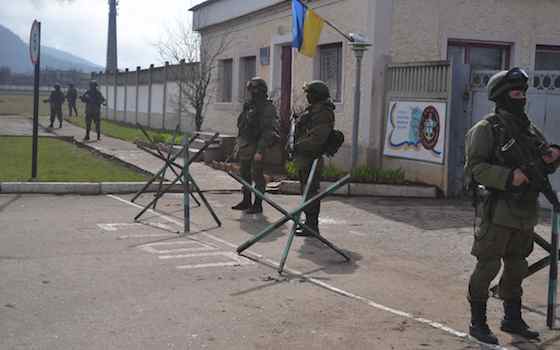 In American domestic politics, messing with is known as "the third rail," referring to the power source for trains that is fatal to the touch. In foreign policy discussions, invoking the name of Adolf Hitler promises the same lethal result.

Former first lady and secretary of state Hillary Clinton learned the lesson in the wake of Russia's invasion of Crimea and parts of Ukraine. She caught hell from critics when she compared it to Hitler's 1938 seizure of the heavily German Sudetenland in Czechoslovakia under Neville Chamberlain's notorious pact with the devil in Munich.

Clinton later said she was merely pointing out "a little historical perspective" from which Americans might learn about a "tactic that has been used before" -- defending a land grab as a protective action for minorities in a foreign land. She made no direct comparison of Russian President Vladimir Putin with Hitler.

The surface comparison overlooked one obvious difference. Hitler's move was part of his declared conviction that Germany required Lebensraum -- more living space for its crowded population -- demanding the Third Reich's expansion. He even more empathically demonstrated his determination soon after in Austria and Poland.

Seventy-five years later, Putin could hardly make the same contention about the Russian Federation of the post-Soviet Union era, which still stretches eastward into Asia to the Pacific. Nor has Putin relied on any maniacal theory of racial purity and ethnic, nationalistic destiny whose end result was World War II, as Hitler did.

What's involved instead is the opportunism of the former Soviet spy apparatchik. He has seized the circumstance of the ouster of his flunky ally in Ukraine to flex his military muscle against the developing influence of the nations of the and .

While the shadow of nuclear confrontation still hangs over the equation, with Russia and the United States still armed to the teeth for such a possible exchange, the old theory of MAD -- mutual assured destruction -- remains a persuasive argument against it.

Instead, sanctions are being imposed or threatened from both sides, along with feints of military strength. Prospects appear hopeful at this stage that diplomacy will avert any catastrophe approaching those into which Europe tumbled in the two World Wars.

President Obama and his cautious and patient secretary of state, John Kerry, have so far proceeded warily but firmly along the diplomatic path of collective response with America's Western allies. In doing so, Obama is keeping to his basic determination to pivot away from his Republican predecessor's turn to foreign-policy adventurism that led to the continuing fiasco in Iraq.

Certain realities of the current situation complicate the administration's legitimate argument that Putin is violating Ukrainian independence by moving military forces into Crimea, and beefing them up in bordering areas. For one thing, the newly installed regime in Kiev after the ouster of former President Viktor Yanukovych was not elected.

Also, the American invasion of the sovereign nation of Iraq, regardless of how odious its dictator was, compromises the current administration's protests against Putin's invasion of Crimea. That remains so, even as the Crimean parliament has voted to return Crimea to Russia and called for a referendum on the matter, widely expected to be approved on Sunday.

Furthermore, repeated public opinion polls clearly indicate that Americans are fed up with U.S. military involvements after more than a decade of them, and have no stomach for further entanglements. That would include one over whether Crimea remains part of Ukraine or returns to Mother Russia.

As for Hillary Clinton and her little history lesson on Hitler's power grab in the guise of protecting German minorities, she'd better be more careful about touching that particular third rail.. As a former secretary of state, her comments on foreign policy will be put under a microscope especially if she seeks the presidency in 2016. She still hasn't satisfied Republican critics of her stewardship during the Benghazi fiasco, and they have shown no sign of abandoning her as their favorite political target -- after Obama, that is.