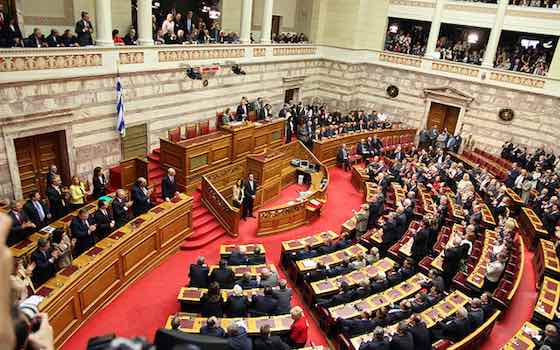 European ministers are warning Greece to stick to economic reform as the country prepares for snap elections due to take place late next month. The elections were called for after Greek lawmakers failed to elect a new president. The political stalemate could have ramifications well beyond Greece's borders.

Greek citizens said they were in no mood to vote in next month's election.

Suzanna Steiner said elections should not be happening now. "It's the worst time for the economy and for security and everyone is in a bad mood."

Dakis Voultsis, a private businessman, echoed Steiner's feelings. He said the government should have been left to do its work.

But, Voultsis said, "now that fresh elections will take place, Greeks will have to make a decision about who to vote for."

Members of parliament failed for the third time to elect a new president, forcing Prime Minister Antonis Samaras to set parliamentary elections, which are due to take place January 25.

After years of tough austerity measures aimed at rescuing Greece from a major debt crisis, the left wing party says, if it wins, "austerity will be history".

Syriza's leader Alexis Tsipras said the new election would be the beginning of the end for the regime that sank the country into poverty, employment, grief, and desperation.

The Syriza party said it wanted to renegotiate two economic bailouts made by the European Commission, the European Central Bank, and the International Monetary Fund. The bailouts, worth nearly $300 billion, have been dependent on Greece carrying out tough austerity measures aimed at reducing its financial woes.

But opponents said the tax hikes and spending cuts have crippled Greece, which now has a more than 25 percent unemployment rate.

When the eurozone's economic crisis was at its height in 2010 and 2011, many analysts feared that the economic turmoil in Greece might risk its exit from the European Union, and could eventually lead to the single currency union breaking up all together.

But, analysts said the fears were not so pronounced.

Dimitris Sotiropoulos, Associate Professor of Political Science at University of Athens, said Syriza, if it won the election, would negotiate with Greece's lenders and would not risk losing Greece's place within the eurozone.

"Both competitors for power, New Democracy and Syriza, have pledged their will to stay within the Eurozone and also representatives of major European organs and institutions have already assured Greek government that there is a commitment to have Greece in the Eurozone," said Sotiropoulos.

Germany's Finance Minister said that there was "no alternative" to structural changes in Greece and warned that difficulties might arise if Greece chose a "different path". He said new elections would not change the agreements made with the Greek government.

Article: Courtesy of Voice of America