Why Greeks are Leaving Athens for the Good Life 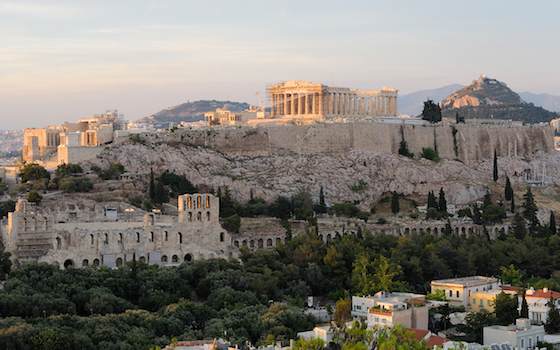 During the Seventies and Eighties, hundreds of thousands of Greeks abandoned their villages for the cities, where work was plentiful and life was more exciting.

I myself left Kleitoria, the place where I had been born, in 1981 aged 22. Kleitoria is situated in the Peloponnese, near Kalavryta, about two and a half hours' drive from Athens, the big city that was to become my home. I fell in love with an English girl; we got married, had two children, and made a comfortable life in the northern suburbs of Athens.

Then Greece fell victim to the global recession, experiencing a government debt crisis that shook Europe and left its people subject to severe austerity measures and widespread unemployment.

Today, not only are many families being forced to abandon the city and return to their roots but a number of young people are choosing to start their working lives in the countryside, aware that the metropolis offers no hope of employment.

I had lived and worked as a cabinetmaker in Athens for 35 years, but it was impossible to find any work after the firm I had been working for folded. Despite my long years of work, my employer had neglected to keep up my national insurance payments, thus rendering me ineligible for unemployment benefits.

So I decided to go back to the village, and cultivate as much land as I had. My parents also still had a little land, and I had not broken off friendships in Kleitoria. But in a country where the state has limited funds for agricultural subsidies the attempt to create something new from scratch is no easy task, especially when, like me, you are approaching middle age.

I tried to register for a funding programme but found that it was open only to young farmers, and I realized that I would have to fund any agricultural projects myself.

I began by thinking about what grows best in my area, and how I could exploit that. There were many options, but they all required a great deal more money than I had, and so I decided to plant fruit trees.

I chose quince, a popular fruit in Greece which does not need a great deal of care and that is easily cultivated around Kleitoria. Another advantage was that the region around the village produces very good quality honey, so I bought some hives, plenty of books on beekeeping, and apprenticed myself to an experienced beekeeper. With his help, I hope I will soon have a decent income from my bees, but it is also a fascinating science that is a pleasure to learn. However, as these two projects are long-term ventures I had to do something to have an immediate income, which I am managing by raising free-range hens and cockerels and selling their eggs and meat.

As you can imagine, my life now bears no resemblance to my old one in Athens. I think the hardest thing has been the break-up of my family, as we are now split between Greece and Britian.

My son is working in London and my daughter returned in August from doing an internship at a bakery there. Although she would have had no difficulty getting a job in London she was determined to make a go of it in Athens, rather than leaving the country as several of her friends -- and indeed hundreds of thousands of young Greeks -- have done, but she is still unemployed. My wife has had to leave Greece entirely for family reasons, so we haven't seen each other for five months, unless you count .

I have found peace of mind in the choices I have made. Indeed, there are several other people in Kleitoria who turned their lives around by coming back to the place they were born, and we all feel the same sense of relief that we were able to 'get out'.

I have once-affluent friends in Athens who did not have the options that I had, and are struggling with the relentless pressure that financial deprivation brings. They envy my lifestyle, my contact with nature, the opportunity I've had to start again and do something new.

Occasionally I miss the comforts of our apartment in Athens, with its panoramic views over the city. But then again, the view from my window in Kleitoria is the majestic snow-capped peak of Helmos, just a few minutes' drive away. Deep down, I know which I prefer.

"Why Greeks are Leaving Athens for the Good Life"