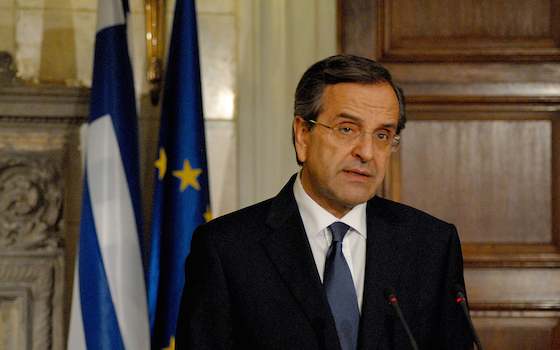 The costs are high, but the government has stuck to implementing the required steps.

Four years after Greece entered the economic crisis, there are signs the reforms sought by the international lenders have begun to pay off, experts said.

The government floated a sovereign bond for the first time since the crisis started, following a report that Greece will achieve a primary surplus of 1.4 billion euros. The EU's statistics agency Eurostat certified the amount of the surplus last week (April 23rd).

During the crisis, Greece has been unable to borrow in international markets.

"The reception of the five-year bond has exceeded all expectations. International markets have expressed, beyond any possible doubt, their confidence in the Greek economy," Prime Minister Antonis Samaras said.

The government said it hoped to raise 2.5 billion euros, but raised 3 billion euros at 4.75 percent in an issue that drew 600 bidders, particularly from the US and the UK.

The success comes only two years after investors suffered 74 percent losses as Greece wrote down its debt, which is still 310 billion euros.

"[The] successful bond issuance is a first but clear step in restoring market access for Greece. However, it should also be a reason to stay the course of reforms and strengthen the recovery under way," said Siim Kallas, vice president of the European Commission.

"This is good news," Antonis Klapsis, head of research for the Konstantinos Karamanlis Institute for Democracy in Athens, told SETimes. "After four painful years, Greece is getting back to the markets, which means that the markets are actually trusting Greece again."

IMF Managing Director Christine Lagarde described the sale as an indication that Greece is "heading in the right direction and the water testing that the authorities wanted to do is really successful."

Samaras vowed to allocate 70 percent of the surplus to the most affected austerity victims as a social dividend, although some critics said the offer is being made to bolster support for his coalition government ahead of local elections in May.

Klapsis said the sale is a clear sign the Greek economy is on the upswing.

"In the medium-term that means the people, especially those who were hit by austerity, are going to experience the positive effects of economic growth," he said.

Experts said many tasks remain in addition to the revenue-related actions. They include implementing stalled privatisation and breaking monopolies on certain professions such as lawyers and pharmacists, along with other deeper structural changes.

"The fiscal results are very satisfactory and Greece has produced results the hard way. The successful bond sale helped, but Greece will not begin to return to even a slight growth until the second half of this year," Aggelos Tsakanikas, director of research at IOBE, told SETimes.

Tsakanikas said the big question is whether the government will be able to make the achievement sustainable during the next year.

"If the economy recovers, we could see some positive things. But right now, we are creating expectations," he said.