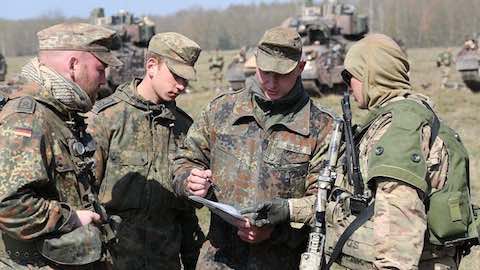 In the wake of the Brexit vote, Germany is increasingly willing to assume responsibility for the grand edifices of Western cooperation through the UN, the EU and NATO.

After decades of high trust in institutionalized cooperation, in both NATO and the EU, Europe is waking up to the realization that institutions last only for as long as power is aligned in their support. This reality has come into focus following Britain's decision to exit from the EU, Trump's misgivings about NATO, and Putin's quite obvious desire to rattle both. For now the institutions endure, but unsettled power arrangements do question their longevity.

The potential upheaval these trends could provoke if they all reach their full potential has already attracted considerable attention among commentators. More likely is a more incremental change to Europe's security order where some countries manage to wrestle a degree of control from the currents of fragmentation, and none of these countries is more important than Germany.

Germany's equivalent to a national security strategy -- its white paper on security and defense of June 2016 -- makes two things immediately clear: that Germany is ready to assume a more active role in matters of security and defense, and that German activism will always be channeled through the familiar key institutions -- the UN, NATO, and the EU. In other words, Germany is increasingly willing to assume responsibility for the grand edifices of Western cooperation. If Germany pulls it off, it will become a powerful force of integration opposed to the above-mentioned forces of fragmentation.

The immediate cause of Germany's elevation to the role of leader is a concomitant decline of leadership on the part of the United States and Britain. This decline has been coming for some time. The wars in Afghanistan and Iraq gave an appearance of US-British engagement not only in these wars, but also in the big questions of European defense. Here the bleak conclusion is that the cumulative effect of a decade plus of strenuous counter-insurgency warfare increasingly has taken a toll not only in regards to human and financial costs but also the US-British political patience to invest in multilateral security cooperation in Europe. The United States has thus sought to rebalance its engagement in favor of Asia, and Britain has been seeking to reinvent its role as a global player and mostly a global trading power.

The consequence has been a slight sense of abandonment in NATO -- a lack of "compass," as one diplomat put it -- and a feeble attempt beginning in 2013 to reenergize security and defense cooperation via the EU. The intervention of Brexit has in some ways opened a path to compromise in the EU, though the wider effects of Brexit remain to be seen.

Putin's aggressive policy in Ukraine, including the annexation of Crimea, has eased political pains a bit. The U.S. has been at the forefront of the collective defense response, investing significant forces for an enhanced U.S. presence in Europe (up to four brigades where previously there were two) as well as significant diplomacy in crafting a deterrence policy vis-à-vis Russia. However, the transactionalist streak in U.S. policy has also become more pronounced, leading European allies to commit to the 2014 "defense pledge" by which they pledge to spend 2% of their GDP on defense, and generating a sense that "Europe" will have to do more to provide for its own security. Germany announced in the fall of 2016 that its defense spending will rise from 1.2% to the target of 2%, a dramatic reversal that, even if it is phased in over several years, will eventually add some €20 billion to its defense coffers. Germany will thus begin to pull markedly ahead of France in real figures (both spend around €34 billion annually on defense).

Germany's more visible defense leadership is thus a matter of time. It is symbolic of another long-term trend in European security, namely the transition from a bipolar system to one of more flexible continental power management. In the bipolar system, the Soviet Union/Russia and the United States were clearly in the lead as superpowers second to none. In a system of continental management, middle powers, such as Germany, gain a more influential and independent role. One might say that Germany is geographically "condemned" to play this role, which it did notably in the period from roughly the 1860s to 1945.

Germany's central balancing act between east and west is not new, but it has been frozen for the better part of a century. There was some balancing to do during the Cold War, but this took place from within the NATO framework. Today, Germany must partly operate in a leadership position outside of such frameworks, and this is new. There is therefore a political culture of leadership to recover, albeit in a new historical context. This will not be straightforward: the institutions through which Germany wants to exercise its leadership are fragile, and Germany must find a way to craft a strategic dialogue with Russia that, in opposition to Russian interests, is capable of enhancing Western institutions.

Germany's balancing act, its search for institutionalized leadership, its restrained and strategic engagement with Russia -- these are defining features of the coming decade in European security policy. Germany's rise to prominence has been in the cards for some time but Brexit has accelerated it and accentuated all the inherent dilemmas and difficulties of German leadership. Germany's partners could do worse than take note and assist Europe's central power in this quest for 21st century leadership.