Germany: Return of the GroKo 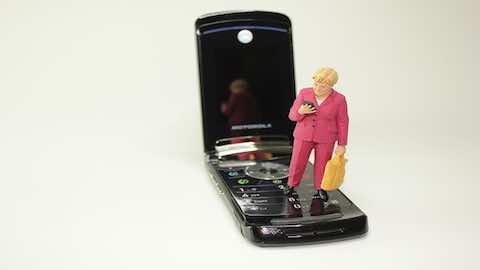 By David Ritchie (The Strategist)

Chancellor Angela Merkel is still trying to form a new coalition. Negotiations will continue into the new year.

Nearly three months after the 24 September 2017 federal elections in Germany, Chancellor Angela Merkel is still trying to form a new coalition. Negotiations will continue into the new year.

Her Christian Democrat/Christian Social Union alliance (CDU/CSU) ended up as the largest party group, with nearly 33% of the vote and 246 MPs out of 709 in the Bundestag. But that's still far short of a majority, so Merkel needs a coalition to govern. There are only two possibilities: the so-called 'Jamaica' coalition, made up of the CDU/CSU, the Greens and the Free Democrats (FDP); or another grand coalition ('GroKo' in German) with the Social Democrats (SPD).

All parties represented in the Bundestag categorically ruled out making any sort of deal with the far-right, nationalist/populist Alternative for Germany (AfD), which has 94 seats and is the third-largest group in the German parliament.

Shortly after the elections, faced with the worst result the SPD had achieved for several decades, its leader, former European Parliament president Martin Schulz, rejected the idea of another GroKo. He argued that the SPD needed time in opposition to rebuild and reorient itself.

So Merkel pursued, actively and apparently with the full support of both the Greens and the FDP, the Jamaica option. Despite several rounds of tortuous negotiations, however, she wasn't successful. Differences with the FDP, in particular, were too significant to overcome. It was the FDP that pulled the plug.

In response, the chancellor indicated publicly that she didn't support leading a minority government and would prefer to hold new elections. This could well have been a clever tactical move, as almost none of the other parties -- except the pariah AfD -- could bank on improving its position in new elections.

Whatever the motivation, pressure started to mount from within the SPD for Schulz to reconsider another GroKo with the CDU/CSU, for Germany's sake. And it seems to have had an effect: the two groups held preliminary talks last week and have agreed to continue their informal discussions this week. This hasn't been easy for the SPD; there are many in the party who blame the previous GroKo for the SPD's demise in the elections. But those supporting another grand coalition appear to have the upper hand for now.

To maintain pressure on the SPD, Merkel has ruled out, again, a minority CDU/CSU government. She has also ruled out another variant floated by some: an agreement that provides for a CDU/CSU government to be supported informally by other parties, without a formal grand coalition.

And a recent Deutschlandtrend poll shows that nearly two out of three Germans (61%) agree that a new GroKo would be the best outcome for the country. That's a rise of 16 percentage points since the beginning of December. Only 34% of those surveyed supported a CDU/CSU minority government.

There are still many hurdles to overcome. Despite its weak electoral position (and polls suggest it has gone backwards slightly since September), the SPD will demand a high price for such a coalition. But it is now the only game in town, short of new elections. And an N24/Emnid poll taken a week or so ago revealed that 62% of Germans now expect a new GroKo to be formed.

Leaving aside continuing serious doubts about the Trump administration's commitment to the vital trans-Atlantic partnership and its attitude to trade, Europe has enough major problems of its own to deal with -- and forming a stable German government is vital to meeting those challenges. Brexit and building a new European Union are just two of the more pressing issues. But possibly the greatest danger comes from the success -- or possible success -- of populist/nationalist parties in Europe.

Poland, Hungary and one or two others have had governments formed by populist/nationalist parties for some time. We have just seen, in Austria, a coalition formed between the new conservative chancellor, Sebastian Kurz, and the far-right Freedom Party. Astonishingly, part of the price Kurz had to pay for this was to give the Freedom Party the interior, defence and foreign affairs portfolios. In the Czech Republic, recent national elections also produced a populist/nationalist government led by the second-richest man in the Czech Republic, Andre Babis.

But worse could still be to come: Italy is due to hold elections in 2018 and current polling shows the populist Five Star Movement (Cinque Stelle) and nationalist Northern League (Lega Nord) with over 40% of the vote. Add Silvio Berlusconi's Forza Italia (Forward Italy!) to the mix -- and this is likely -- and Italy too could be another very serious problem for sensible European leaders like Chancellor Merkel and French President Emmanuel Macron to deal with.

We can only hope, for the sake of German, European and, indeed, global stability, that the polling is right and a GroKo results from the CDU/CSU--SPD negotiations. Given the many uncertainties it now faces, the world needs a strong and stable Germany.

Even a weakened Angela Merkel -- and there is little doubt that the coalition-forming process hasn't been good for her support -- is essential for this stability.

David Ritchie was Australia's ambassador to Germany from 2014 to 2016. Image courtesy of Pixabay user WiR_Freebies.

Europe: "Germany: Return of the GroKo"