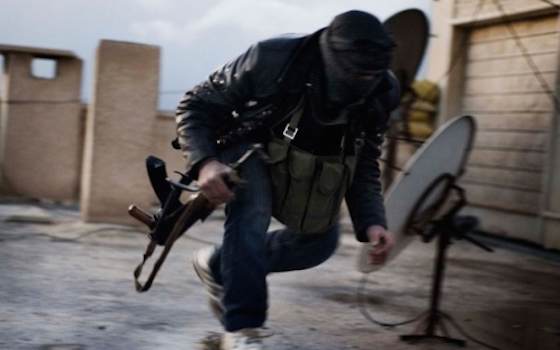 There is a growing sense among leading German politicians that the Federal Republic’s preoccupation with the NSA surveillance scandal should not overshadow the pressing need to confront the Islamic State.

“German worry over Islamist attack eclipses spy scandal,” Bloomberg News headlined its Oct. 8 report on the issue. A new reality appears to be sinking in. Roderich Kiesewetter, a Bundestag deputy from Chancellor Angela Merkel’s Christian Democratic Union and a former army colonel, was quoted as saying, “In the German public, there is more of an awareness that our intelligence services need information to confront these terror threats.”

Some German politicians from powerful opposition parties, the Greens and the Left Party, have called for US airstrikes on Islamic State positions near the besieged city of Kobane in northern Syria. This call has come despite the Greens’ and the Left Party’s traditional anti-Americanism and hardline anti-intervention policies.

According to German authorities, an estimated 450 German Muslims have gone to fight against the Syrian regime. Most of the 450 sought membership with Islamic State. Roughly 40 women and a 13-year-old boy are among those who have departed for Syria. Die Welt provides a helpful systematic breakdown of “German Jihadists in Syria.”

A spokeswoman for Germany’s intelligence agency told this writer that the government cannot track individuals traveling to Turkey because the country does not require visas. European jihadists frequently use southern Turkey as an entry point into Syria.

Germany’s interior ministry is struggling to modernize its counterterrorism policies. On Oct. 2, Interior Minister Thomas de Maiziere acknowledged, “The situation has changed over the last few months.” Germany outlawed Islamic State activities in September. In the same month, a Frankfurt court started the trial of 20-year-old Kreshnik Berisha for membership in the Islamic State; it is the first terrorism trial of an Islamic State member in Germany. Berisha, who was born in Germany to Kosovan parents, was arrested in December 2013.

German officials are tangled up in knots over Islamic State. While they recognize the threat, there has been little appetite over the years to clamp down on jihadist networks in the country. In short, Berlin’s lax policies toward terrorist groups have contributed to its Islamic State crisis.

It is worth recalling that Hezbollah’s so-called political wing is legal in the country. According to Germany’s national domestic intelligence report covering 2013, and published in June 2014, Hezbollah has 950 active members in the Federal Republic. There are also roughly 6,300 radical Islamists in Germany who are supporters of the Sunni branch of Salafism, Interior Minister de Maiziere said last week. Many of these Salafists are connected to the ideologies of al Qaeda, Shabaab, or the Islamic State.

Germany’s latest domestic intelligence report described the growth of Salafists as the most “dynamic Islamic movement” in Germany.

An estimated 150 radical Islamists have returned from the Middle East war theater to Germany. In recent days, the battle for the northern Syrian town of Kobane, where Islamic State fighters are carrying out an assault on Kurdish civilians and fighters, has had repercussions in Germany. On Oct. 7, pro-Islamic State Muslims fought Kurds in the city of Hamburg, resulting in 14 people being injured and 22 arrests. The police used water cannons to disperse the street battle [see video from Online Focus].

In an eye-popping report last week, Germany’s ARD television station stated that over the years authorities allowed — and even encouraged — the travel of German Islamists to foreign countries. The policy appeared to be a kind of “export of terror” designed to reduce the risk domestically. “Persons who are dangerous and could launch attacks are brought outside of the country,” a government official said.

“Germany is on the way to be world champion in terrorism export,” one commentator wrote in Die Welt newspaper in 2010. The author was not referencing the green light from German authorities for jihadists to leave for the Afghanistan and Pakistan war theaters, but rather the sheer number of radical German Muslims departing for conflict zones. The ARD report helps to explain why so many radical German Islamists have enjoyed unrestricted movement.

The chief destination for German jihadists now is to fight in Syria, Die Welt reported last week. German intelligence agencies also believe that jihadists who were based in terror camps in Afghanistan and Pakistan are now in Syria or on their way there. Pakistani jihadist networks — ranging from al Qaeda to the Taliban to the Islamic Movement of Uzbekistan — have attracted German Muslims to Pakistan and Afghanistan. The large number of Germans gave rise to so-called “German colonies” in the region.

According to German security information obtained by Die Welt, the German-Moroccans Yassin and Mounir Chouka and their wives, Nele Ch. and Luisa S., as well as Seynabou S. from Hamburg, along with children, relocated from Pakistan to Syria. It is unclear if the terrorists made it to Syria. Some of the group’s children were born in terror camps in Pakistan. While in Pakistan, the Choukas joined the Islamic Movement of Uzbekistan. Now, they have declared allegiance to Islamic State.

The Choukas, who are originally from the western German city of Bonn, motivated Arid Uka, a 24-year-old radical Islamist and Kosovo native who worked at Frankfurt’s airport, to murder two American airmen and wound two others in March 2011. Uka was sentenced to life in prison but Germany’s liberal judicial system may release him after 18 years of prison time.

Another German jihadist, former rapper Denis Cuspert a.k.a. singer Deso Dogg, is said to be in Syria and has been linked to both the Islamic State and al Qaeda’s Al Nusrah Front. Germany plans to submit his name for inclusion in the UN’s sanctions list, Der Spiegel reported on Oct. 5.

While issuing rhetorical support for strikes on Islamic State, the Merkel administration decided not to join US president Barack Obama’s airstrike coalition in Iraq and Syria to knock out Islamic State fighters and sites. Merkel did, however, send military arms to the Kurds and military personnel to train the Kurdish fighters.

It is unclear why President Obama chose not to twist Germany’s arm to join his anti-Islamic State airstrike coalition. Commentators in Germany believe the Merkel administration could do much more to stem Islamic State violence. In a late September commentary in Germany’s mass circulation paper Bild, the headline screamed, “All Talk, no action!”

Benjamin Weinthal reports on European affairs for The Jerusalem Post, and is a Berlin-based research fellow at the Foundation for Defense of Democracies. Follow Benjamin on Twitter @BenWeinthal