Hollande-Trierweiler Split and The Question of Marriage 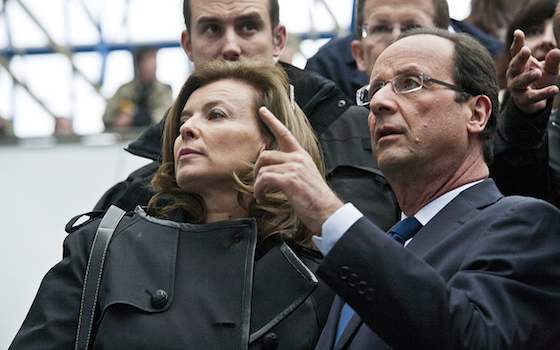 The Hollande-Trierweiler passage in the rich history of French scandals has ended badly for both, contributing to morbid forces of disunion at work in contemporary French society.

Until the announcement - indeed the proclamation - was made last weekend by the President of the that Valérie Trierweiler had been dismissed as the royal favorite, the French public had contentedly assured its foreign friends of the amusement provided by the affair, and its sophisticated indifference to their President's sentimental imbroglios.

But the French have been shaken by François Hollande's curt, 18-word termination of his relationship with the companion, who two years ago was "the woman of my life," and who recklessly claimed to be the "First Lady" of France (with office and staff in the presidential palace) - a title unknown in France since the 1930s, when the last President of the , Albert Lebrun, made a state visit to the United States and amused French journalists picked up the term to describe his wife.

The whole matter has taken a significant political turn with the unexpected and noisy anti-Hollande street demonstration that followed the president's statement. This protest was unanticipated and heterogeneous in composition and turned seriously violent.

Mr. Hollande's victory in the presidential election two years ago occurred in a context of economic crisis, divided ideologies and economic counsels, seemingly the most urgent issue requiring reexamination and reform. Instead, the Hollande priority was to respond to the most controversial demand of his electorate, same-sex marriage, affecting the role of families in society. This measure has passed in the legislature, together with legal provisions for adoption of children by same-sex couples (of either sex). Other controversial measures, not yet agreed, are proposed for state-financed sperm-donor conception and possibly for surrogate mothers).

These, of course, are no novelties, having been prominent demands not only in France, but widely in Europe and the United States. France already offers a "pact" affording persons of the same sex a legal status that provides the same tax, inheritance, pension, and other legal and financial advantages of conventional marriage.

This is conferred at the local "mairie," the municipal office in every commune in France, and can be accompanied by a celebration of the event if the parties involved want to ask their friends and relatives. But people have protested that this is not a marriage in the proper sense. The reform imposes civil marriage at the mairie, always compulsory in France, which for religious believers usually precedes a religious ceremony at church, synagogue, or sometimes mosque.

The institution of single-sex marriage met a long-established demand from the Socialist electorate, and equally met the established outrage and objection of the major religions in France, and elsewhere, that because of its nature and history in human society marriage is inherently a relationship of man and woman to conceive and produce children, and therefore possesses a "sacramental" character which single-sex relationships do not.

Mr. Hollande's government is now talking about "gender theory" (that sexual identity is socially imposed) in infant classes, where little boys will be encouraged to play with dolls and little girls with construction sets (one presumes that a line is drawn at GI Joe and toy guns for girls).

In France, the opposition to these initiatives has proven much wider than expected, and not always religious in motivation. The affair recalls the schools controversy in 1984, during François Mitterrand's first presidential term, when proposed changes in state control of private schools (mostly Catholic; at the time some 17 percent of all French schools were private) provoked weeks of popular demonstrations, culminating in a national manifestation by hundreds of thousands of protestors, if not a million or more, leading to the government's withdrawing its proposals, followed by Mr. Mitterrand's fundamental reversal of political and economic policy. The 2013 oppositionists to same-sex marriage hoped for no less, but have failed to get it.

The controversy instead has reawakened French religious-secular, ideological, and regional and class hostilities believed long healed since the Revolution and the church-state settlement of 1905, establishing state secularism and religious freedom in France. The opponents to President Hollande's proposals claimed huge national turn-outs, attracting a much larger and younger participation than the government expected. The protesters in turn were attacked by the Socialists and the government as homophobes, reactionaries, voters, and Petainists, if not fascists - an unpleasant mélange further politicizing what was widely seen by its opponents as an attempted cultural coup .

Together with the unending economic crisis and the President's failure thus far to produce a successful economic reform program, or to inspire popular (not to speak of business) confidence that he is capable of producing one, Mr. Hollande has unintentionally evoked a bitterness among the French, widely commented upon by foreign observers.

The president's glacial dismissal of the "official" First Lady - eighteen words long, including three uses of the personal pronoun "I" - will do him no good with the French electorate. It has been widely noted that the form of his statement follows exactly the constitutional phrases to be used in the dismissal of a government minister. "I make known that I have terminated [the life I have shared in common with Valérie Trierweiler]...." The veteran French political advisor, and longtime head of the advertising firm, Jacques Seguéla, has said that this will leave a deep scar, above all upon the female electorate.

"Hollande-Trierweiler Split and The Question of Marriage"