Emmanuel Macron Was Supposed to Be the Anti-Trump 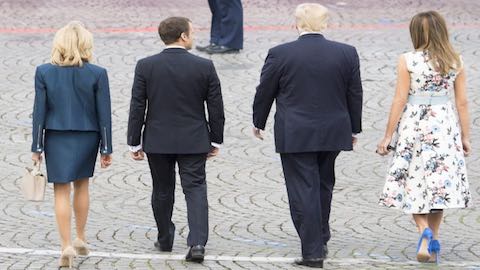 Emmanuel Macron Was Supposed to Be the Anti-Trump (Photo: justified sinner / Flickr)

France's President Emmanuel Macron -- the French darling of American liberals -- is slashing taxes for the rich and cracking down on immigrants.

Coming just months after the election of Donald Trump in the United States, and as illiberal authoritarianism seemed to be creeping all over Europe, the election of French president Emmanuel Macron brought a sigh of relief to many across Western democracies.

It was May 2017 when Macron, a pro-European centrist, decisively defeated the far-right, Euroskeptic Marine le Pen. Enthusiastic and patriotic messages such as “Vive la France” or “Vive l'Europe” poured in on Twitter from both sides of the Atlantic.

Some Americans weren’t shy about describing Macron’s victory as a defeat for both Trump and right-wing nationalism around the world. “Macron’s win is a blow to far-right nationalism,” former Obama adviser Ben Rhodes tweeted, and “and a sign that the Brexit-Trump wave has broken in West.” Trump’s defeated rival Hillary Clinton hailed the French vote as a “victory for Macron, for France, the EU, and the world.”

Immediately after Macron took office, the young president postured to show the world he was no pushover. At his first official meeting with Trump ahead of the NATO summit that May, Macron engaged Trump in a bone crushing, never-ending, awkward handshake that played out like a standoff between the two men’s divergent politics.

Videos and second by second analysis flooded the news cycle. “That's how you ensure you are respected,” Macron gloated to the Journal du Dimanche newspaper afterward. “You have to show you won't make small concessions -- not even symbolic ones.”

Riding on this confident wave, Macron went on to troll Trump's decision to withdraw from the Paris Climate Agreement by inviting U.S scientists and engineers to come work in France -- and then launching a campaign called “Make the planet great again.”

But what some thought was the beginning of a boxing match between Macron and Trump ended up being a highly orchestrated WWE. The rivalry didn’t last long. Indeed, just two months after the handshake, Macron feted Trump at a Bastille Day military parade in Paris. Trump was so impressed that he recently ordered his own military parade in the United States.

The policy convergence between the two rivals, however, goes far beyond a shared fondness for military pomp.

“President of the Rich”

Similarly to Trump, Macron promised a renewal of politics that would transcend the traditional left-right split. He crafted an image of himself as a highly ambitious leader who was unafraid of carrying out bold reforms and challenging the status quo in a Napoleonic -- or Trumpian -- kind of way.

More than eight months after he took office, it's now clear that Macron is no meek centrist -- and definitely not a progressive. He’s more like a right-leaning, pro-market, elitist monarch, who shares more in common with Trump than his admirers imagined.

The former investment banker didn’t wait long to start shaking the foundation of the French labor market. A few months after being elected, ignoring mass protests and concerns from unions, he enacted deeply controversial labor reforms with a series of executive orders.

Macron’s “reforms” entirely reorganized the French labor market to give unprecedented power to employers and corporations. They play on the false and dangerous promise that deregulating labor markets will result in reduced unemployment and economic growth. While the French labor market remains more protective of workers than say, the U.S. model, this reform brings France much closer to the American model.

A few months later, Macron’s bloc in the French parliament voted on a new budget that Trump would’ve happily signed. It slashed the corporate tax rate down to 25 percent (from 33 percent), scrapped a longstanding “solidarity tax on wealth” (France was the last EU country to have a wealth tax), cut 1.7 billion euros in housing aid, and eliminated 120,000 public contract jobs.

This led the well-respected French economist Thomas Piketty to compare Macron to Trump, who just passed a $1.5 trillion tax giveaway to the rich and corporations in the United States.

Both men, Piketty argues, share the same flawed economic vision -- a variant of the trickle-down theory that Ronald Reagan and Margaret Thatcher swore by. And both falsely claim that cutting taxes on the wealthiest benefits ordinary people and stimulates the economy by giving the rich incentives to invest in their country.

This theory was, of course, never proven scientifically -- and au contraire, reports have shown that these policies contribute to the rise of deep inequality. According to the Observatoire Français des Conjonctures Economiques (OFCE), an independent economic research center, 42 percent of the French tax reduction will in fact only benefit the wealthiest 2 percent. The numbers are comparably skewed in the United States.

Trump and Macron “refuse to take into account facts which are now well established, namely that the groups to which they give preference are those who have already acquired a disproportionate share of the growth in recent decades,” Piketty concludes. Yet both presidents want the masses to cherish the wealthy, whom Trump hails as “job creators” and Macron calls “lead climbers.”

No wonder opposition parties in France are calling Macron the “president of the rich.”

More surprisingly, given Macron’s image as a redoubt against France’s resurgent far right, the French president has tacked a decidedly Trumpian line on immigration. The man who once congratulated German Prime Minister Angela Merkel for responding “humanly” to the refugee crisis by opening Germany's doors now supports a crackdown on undocumented migrants.

This month, the administration is expected to unveil a new migration and asylum bill that will toughen immigration laws in an unprecedented way. NGOs, charities, and non-profit organizations describe the bill as inhumane and warn of potential human rights violations. “No government since the end of World War Two has dared” to go as far as Macron in tightening migration, French immigration Patrick Weil told Europe 1. Even members of Macron’s own party are expressing serious concerns.

The bill reduces the time for migrants to apply for asylum from 120 days to 90 days, and to two weeks to appeal a decision instead of a month. On the other hand, it would increase the maximum time migrants spend in detention centers from 45 days to 90 days, and from 16 hours to 24 hours in case of administrative detention.

These measures give authorities more time and power to increase and accelerate deportations for those who are deemed unqualified for asylum. It’s a tidy parallel to the massive deportation apparatus the Trump is building in the United States, while drastically cutting back the number of refugees the country accepts.

Meanwhile, humanitarian groups such as Human Rights Watch and Doctors Without Borders have been condemning French authorities for turning a blind eye to widespread reports of police violence against migrants, such as confiscating their sleeping bags and blankets in freezing temperatures, barring aid groups from distributing basic supplies, and indiscriminately attacking people with pepper spray.

Sure, the French president is highly educated, able to hold philosophical discussions, and does not bully his opponents on Twitter like his American counterpart, who’s often described as unstable, provocative, and vulgar. However, they both have authoritarian tendencies and hold great disdain for the poor.

If there’s a humane alternative to the plutocratic and xenophobic politics of the far right on both sides of the Atlantic, it won’t be found in Macron’s deceptively right-wing centrism.

Photo: Emmanuel Macron and Donald Trump with their spouses in Paris

Europe: "Emmanuel Macron Was Supposed to Be the Anti-Trump"