A Flickering Flame of Faith in Sochi's Oldest Orthodox Church 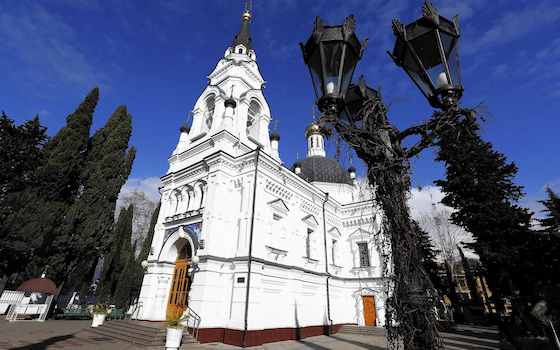 About the only difficulty I've encountered here, wandering alone, far from the official Winter Olympics staging grounds, has been my inability to speak Russian.

Still, I'm able to communicate somewhat effectively, as I often do at home with our earthier elected officials, through use of broad pantomime, exaggerated facial expressions and voice inflection.

And every so often here in Russia, I find someone who speaks a bit of English.

Then I confuse them by speaking Chicago.

But after all the solitary exploring, I feel the need for crowds with common purpose and sport that spans the globe. There's skating and hockey to see, and skiing up in the mountains. And I'll see that in the coming days.

But there was just one more thing I had to do in Sochi, the port city about 40 minutes away by train from the Olympic compound and its "ring of steel."

I lit a candle in church.

The Cathedral of St. Michael the Archangel sits on a hill overlooking the Black Sea. The Russian Orthodox house of worship is the oldest in the city, commissioned by a Russian noble in the late 1800s, after the long, bloody wars when the army of the czar drove the Muslims from the land.

And then, after the Russian Revolution, when the Communists decreed that religion was the opium of the people, priests all over the nation were tortured and killed or sent to the Gulag. Many churches were destroyed or, like this one, turned into warehouses. Christians were banned from the .

A generation was frightened away from worship and subsequent generations were coerced. Children were born and grew old and were buried without ever hearing the ancient divine liturgy of St. John the Chrysostom sung in the churches of their grandfathers.

Many churches of Russia fell into ruin, but with the fall of communism, they are making a comeback, one of these being St. Michael the Archangel, perfectly restored in recent years. The Russian Orthodox comeback is difficult, with cultural clashes and terrible incidents such as the shooting Sunday that killed a nun and a worshipper in far eastern Russia.

But faith has survived in Russia.

I visited St. Michael on a warm sunny morning, with a moist breeze from the sea on my face as I climbed the steep narrow sidewalk to the gates to the courtyard.

Just inside the doors sat an old woman in a folding chair. She was dressed in black and appeared destitute, most likely a widow. Her head was covered with a kerchief. She held out a cup and begged for alms, making the sign of the cross to bless those who gave.

To the left was the tall white church with its great wooden doors and to the right, the auxiliary, also white, but low to the ground. Between them stood a cypress grove, the cypress trees ordered like tall, dark, green columns of some living, outdoor temple. There were bushes and other trees in the grove as well, some beginning to bud in February, and there were songbirds among them.

A woman walked past in a short white fur jacket, tight jeans and white boots, bright hard-yellow hair, gold bracelets and chains. She pointed to the auxiliary, where there were small icons for sale, and packets of incense for use at homes and gravesides. There, I purchased a thin brown candle, the smallest I could find.

From the beggar at the gate to the one with the white boots, to the attendants and others walking the grounds, all were women, except for one old gentleman.

He seemed to be in his 80s, erect and neat, in a dark coat, his white hair combed back, with bright eyes and hawkish features. I asked if he spoke English and he smiled a "No."

I walked across the courtyard to the church, up the steps, and opened the great door. There were no pews, just a hard polished floor to kneel upon. And from ceiling to floor were magnificent Byzantine icons, the religious paintings that some Western Christians mistakenly believe are prayed to by those of us of the East.

We Orthodox do not pray to the icons. But we venerate them for what they represent. And they help us focus our minds and hearts for difficult journeys. Three icons were on wooden stands, and before these crowded other old women, setting their candles and making their cross.

After I finished, I looked up and the old man I'd met earlier, the one who spoke no English, pointed at a girl, praying.

I watched her pray for a while, a college-aged girl with long brown hair among the white-haired crones, then walked outside and waited. Her name was Ekaterina.

"I speak English," she said.

She had either real wealth or impeccable taste or both. There was nothing flashy about her, no gold, or heavy makeup, no hard-worldliness. Her dark boots looked as if they were handmade and cost a fortune. She wore a simple gray coat of fine wool. A fine silk ivory scarf was at her throat.

I told her: You're so young, and everyone else is old here.

"I'm learning," she said hesitantly. "My grandmother teaches me. I know many young people don't come to church, but I do, also other young, and I hope there will be more to come."

I imagined her as a wife and mother, bringing her own children to church, her husband, his brothers. This is also how faith is restored.

Ekaterina excused herself, as her grandparents were waiting, the old man with the white hair, smiling proudly, and an old woman, the grandmother, understated and elegant.

We nodded to each other and they walked off.

I watched them go, arm in arm, through the gates.

"A Flickering Flame of Faith in Sochi's Oldest Orthodox Church"