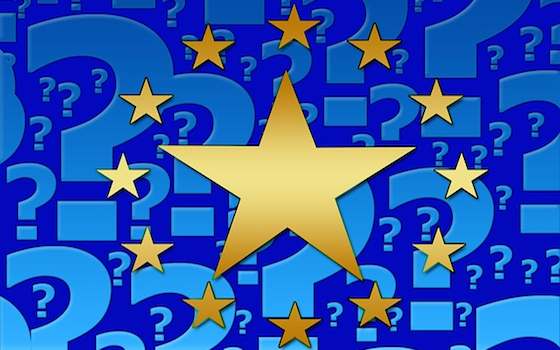 Europe has a special worry about a broken, uncaring economy.

Things rip apart. More and more people fall into desperation. Some of them decide it's the fault of immigrants. Or homosexuals. Or . . .

"Today, Nazi influences are growing in Europe for the same reasons they did back then. The social safety nets have been torn, and people are left behind. Left alone. The hopelessness is what comes first, then the hatred. It's never the other way around," wrote NEVER FORGET. TO VOTE, a campaign led by Sweden's , in the run-up to the elections -- which featured Rainer Hoess, grandson of the commandant of Auschwitz, warning people that democracy and human rights can never be taken for granted.

Its point is that far-right politics, including a blatant neo-Nazism bent on rekindling the old agenda of "blood purity," racial solidarity and loyalty to the homeland, is spreading across the EU just as unemployment and austerity are spreading and Europe's economy comes to resemble, more and more, the economy of the 1930s.

In other words, malignant racism combined with a bad economy can still foment social poison. Hatred seeks power and power seeks hatred, and they sometimes find each other. And what we call the "social safety net" might better, perhaps, be called the social immune system -- because society is a living organism.

In Greece, for instance, Golden Dawn, a neo-Nazi party, shocked the country by winning 18 parliamentary seats in 2012. This is a group with a serious us-vs.-them agenda, organizing itself around the scapegoats of the moment.

According to Guardian/UK: "Members of Greece's gay community and dark-skinned immigrants have been singled out for attack by Golden Dawn hit squads. The paramilitary units roamed the streets with seeming impunity until a government crackdown against the group spurred by the murder last September of the Greek musician and anti-fascist activist Pavlos Fyssas."

Such organizations are active throughout Europe, including Germany, even though they are illegal there. One of them, called German Youth Faithful to the Homeland, attempted to instill Nazi values in young people through camp holidays. As Der Spiegel reported, shortly after the group was banned in 2009: "The interior ministry said children were put through military-style drills and were taught that foreigners were 'enemies of the people.' There were training courses in 'racial science' where children were taught about the need to 'restore blood purity.'"

"Banning" the return of Nazism is hardly the answer and, if conditions begin making the ideology of hatred seem like salvation to large numbers of people, such a tactic will quickly turn counterproductive. The Swedish Social Democrats' campaign not only links Holocaust remembrance with active citizenship, but makes the point that economic hopelessness is a precondition for the scapegoating frenzy that is Nazism. We have a crucially abiding need to build the best of who we are into our social structure; if we don't, the worst of who we are becomes inevitable.

In the U.S., the concept of the social safety net is not discussed with the sort of historical urgency it garners in Europe; unfortunately, that has left it stagnating, at least since the Reagan era, in "political controversy," condemned as socialism, belittled as welfare. Even such solid social values as free public education are tottering on the brink of political abandonment. The entirety of the political debate, as conveyed by the media, amounts to: What can we afford? This is a condition seldom placed on military spending.

Social spending, when not condemned as harmful or wasteful, winds up being relegated to the category of luxury, as though the physical, emotional and spiritual health of our fellow citizens and, especially, their children, has no far-reaching social consequences. Socially, we're stuck in a system of profit (private prisons, for instance) and waste (human lives). We're stuck in a society with a defective immune system, and reaping the consequences.

Nevertheless, there's plenty of evidence that the social safety net, when it is functioning, works. For instance, discussing (at SpotlightOnPoverty.org) the results of their research examining the long-term value of the food stamp program, Hilary W. Hoynes and Diane Whitmore Schanzenbach note that it's been an important factor in helping people pull themselves out of poverty.

"Our results suggest rather than the Food Stamp program creating an inter-generational 'welfare trap,' the reverse is more likely true," they write. "Providing benefits to children at important stages of their development allows them to grow in ways that may help enable them to escape poverty when they reach adulthood. . . .

"In the context of the current congressional debate, our findings suggest SNAP (Supplemental Nutrition Assistance Program) benefits that go to children are better thought of as an investment than as charity."

Without such investments, social hopelessness has no bottom.