Migration, Islam and Security in Europe 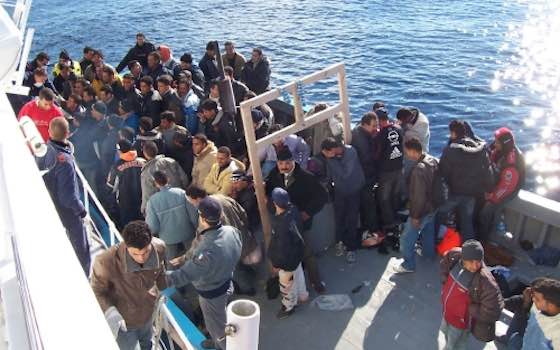 Migration, Islam and Security in Europe

How secure is Europe? What is the future of the Muslim community in the West? What should be the nature of Europe's relationship with the Islamic world? In the wake of the Charlie Hebdo attacks in Paris, these were some of the questions addressed by Dr. Jack Goldstone at a recent ISN-CIS roundtable held on 20 January 2015 at ETH Zurich.

After diagnosing Europe's demographic situation, Dr. Goldstone's message was a straightforward one: without continuing large-scale immigration, Europe will soon begin a rapid economic decline. The continent therefore does not have an ‘immigration problem.' It has an integration problem.

Goldstone began by rehearsing Europe's well-known demographic challenges. As a result of declining fertility rates and rising life expectancy, Europe's population is ‘graying' dramatically. Moreover, so-called ‘native' Europeans are likely to become less plentiful than they once were. On the whole, those between the ages of 15 and 39 with a "national background" (i.e., whose parents and grandparents were born in the country) are projected to decline from more than 140 million today to less than 80 million by mid-century. In other words, without immigration, Europe is facing what Goldstone described as "the largest demographic crash in human history."

Immigration, however, is expected to substantially mitigate this crash. In the last few decades, Europe has received a large wave of immigrants. In Germany, for instance, 2/3 of the increase in population in 2012 was due to immigration. Goldstone was keen to point out that this influx of immigrants has not been driven by poverty elsewhere in the world. On the contrary, it has been a function of rising awareness of the opportunities available in Europe and the increasing resources of those who wish to make the journey. In the next few decades, as nascent middle classes in many African countries join those which have recently appeared in Eastern Europe, Latin America, the Middle East and China, the demographic impact of immigration into Europe will become even more substantial. By 2050, 30-50% of Europe's population will be foreign-born or will have a foreign-born parent.

Although these migrants have come – and will continue to come – from all over the world, anti-immigration sentiment in Europe tends to be directed at one group of immigrants in particular, namely, Muslims. On the heels of income gains in the Middle East, the percentage of Muslims residing in Europe has increased from 1-2% to 6-8% in most European countries. Although this still represents only a small fraction of the total number of immigrants (the majority of whom are actually Christian), the growing Muslim population has been associated with fears that Europe is becoming too Islamic. Right-wing anti-immigration movements are gaining ground across the continent. Germany, for example, has been embarrassed by the emergence of PEGIDA, or ‘Patriotic Europeans against the Islamicization of the West.' In France last year, Marine Le Pen's National Front became the first "anti-immigrant, anti-EU" party to win a national election (for the European Parliament) in the history of the European Union.

Goldstone moved to contextualize this widespread alarm by pointing out that migration to Europe – and of Muslims in particular – is a relatively new and unfamiliar phenomenon. Until more recently than is often recognized, Europe was on the sending rather than receiving end of global migration flows. Throughout the 19th century, Europe exported close to 20% of its population to other parts of the world. Niall Ferguson, for one, has described these migrations as "the indispensible foundation" of imperialism. But most European countries remained net sources of migrants well into the 1970s. As recently as 1975, Goldstone reported, the continent's Muslim population was negligible. Though the consequences are extremely benign by comparison, Europe is now experiencing modernity as many other parts of the world initially did – as a spatial intrusion. In this sense, the recent wave of immigration into Europe represents a reversal of world-historical proportions. In this larger context, recent spasms of European xenophobia are easier to account for, if not to endorse.

Goldstone did his best to dispel a number of myths about immigration that exist in the media and in political rhetoric. Though immigration in general will be significant for decades to come, there is no country in Europe where the Islamic population will exceed 10% within the next fifteen years. The recent attacks in Paris and other incidents of political violence do little to change this. In the United States, Fox News was actually forced to issue a retraction: there are no ‘zones' of sharia law in France, nor are there likely to be anytime soon. As we also know, anti-immigrant hysteria tends to be the strongest where the number of immigrants is the smallest.

Dr. Goldstone then presented Europeans with a moral and political challenge. If a ninety-percent majority is committed to its values and its way of life, it should not feel threatened by a ten-percent minority. On the other hand, if that same majority is "selfish and secular" and "willing to accept whatever is tossed about," its values may be very well be in danger. The implication here was that Europeans should be less concerned with the passionate intensity of others than with the strength of their own convictions – or, as Dr. Cederman added, with their commitment to the ‘Enlightenment project.' Because most Europeans, according to Dr. Goldstone, feel strongly about wanting to maintain values "of pluralist secular government, the rule of law, and the constitutions that they have," the threat to those values is remote. Indeed, the presentation's key point was probably the following one: that Europe does not have an immigration problem. It has an integration problem.

The solution that Goldstone offered to this problem, however, was ultimately a stark one. Immigrants to Europe must either assimilate – by learning European languages and adopting ‘native' values – or return to their countries of origin. Because limiting immigration implies economic decline, ‘native' Europeans must find a way to make assimilation happen. In particular, ‘young Europeans' should be leading the effort. After all, they should want to welcome as many immigrants as possible to help shoulder the increasingly onerous burden of supporting and caring for the elderly.

To illustrate this proposed way forward, Goldstone pointed to American historical experiences with migration as an example for Europeans to follow. He focused, however, not on the predominantly European migrations of the 18th century and 19th centuries, but on the internal migration of African Americans from the rural south into northern and western cities between 1910 and 1970. This wave of migration, he argued, was followed by a relatively successful experience of integration and assimilation. Though the process entailed significant upheaval and is by no means complete (and the recent unrest in Ferguson, Missouri, was mentioned), Goldstone suggested that "the basic laws, institutions and values of American society have not been greatly changed by the fact that a number of professionals, mayors, executives and even the President are no longer from the white majority population." Looking at Europe today, the parallel is certainly thought-provoking.

Dr. Goldstone's brief survey of these issues necessarily left many questions unanswered. For instance, did the civil rights movement in the United States and the assimilation of African Americans not change "the basic laws, institutions and values" of American society? To suggest so seems either to cast doubt on the achievements of landmark civil rights legislation or to whitewash the history of segregation and Jim Crow. It's unlikely that Goldstone was trying to do the latter. More broadly, the narrative of successful integration and assimilation seemed to be based on a somewhat static, or even Eurocentric, view of American history in general. Did successive waves of immigration not substantively change American society – for better or even for worse?

Stepping back from the American case, what exactly are "Western values"? Were Western social and political achievements, even the Enlightenment project that Cederman defended, not also made interactively – i.e., through trade, warfare, and migration – between Western and non-Western societies? There is a growing volume of research to indicate that this was the case, that many purportedly Western achievements resulted from “promiscuous interactions and connections on a global scale” – from the emulation of Indian wootz steel and Chinese cotton-spinning techniques in British manufacturing, to the value added by African slaves and colonial labor. In other words, once we stop thinking of Western achievements as endogenous, or exclusive, developments of European civilization (or, indeed, of the rise of the West as the result of a local ‘efflorescence' of economic growth, as Goldstone has argued elsewhere), questions of non-Western integration and assimilation to ‘Western values’ become considerably more complex.

Finally, what exactly does it mean to ‘preserve' values over such vast expanses of time? Isn't it necessary to continuously update our values so that they remain recognizable? This may be one of the paradoxes of modern life: that our values and institutions need to be renewed and revised even when the aim is simply to ensure that they stay more or less the same. Of course, it would have been difficult to address all of these questions in the time afforded, let alone to answer them. Inspiring them was more than enough to make for an intriguing event.

William Rooke is an Editor at the International Relations and Security Network (ISN).

"Migration, Islam and Security in Europe"