Dispute of Ukraine's Relationship with Russia Rages On 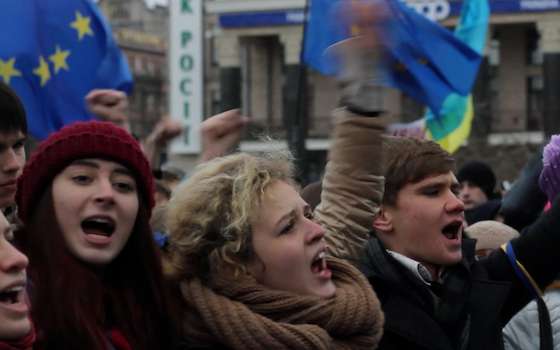 When British Prime Minister David Cameron was insisting, once again, this time to François Hollande, that the will have to consent to remake itself before 2017 if it expects to keep Britain from quitting the Union, Ukrainians were in uproar about how to force their distressed government (and its Russian neighbor, another story) to accept the majority will in Ukraine to join Western Europe, via association with the . Their effort has produced rebellion and spilled into violence.

To the nations once immured in Cold War association with the Soviet Union, the seemed a nearby political paradise -- an attainable liberation, once the Soviet Union collapsed, terminated by Boris Yeltsin in 1991. Ukraine was made independent, although still in contention over several important issues concerning its relationship with Russia.

The dispute concerns Ukraine's relationship with Russia (and several other former members of the Soviet Union) in the Eurasian trade association Vladimir Putin has formed. Ukrainian President Victor F. Yanukovych has signed the agreement, thereby provoking an uprising among those Ukrainians who are determined to associate their country with the West, by way of an agreement proposed by the .

This has revealed the inability to form and follow a consistent policy toward the non-member countries of Europe, evidence of its persisting and crucial inability to find agreement among its 28 members over exactly what "Europe" is. Beyond, that is, a geographical unit that physically terminates in its southeast at the Black Sea and Turkish frontier, and in the center and northeast at the Ural Mountains in Russia, where Eurasia traditionally has been held to begin.

Non-European Turkey has been solicited as an EU membership candidate for many years, but now seems slipping beyond the pale (so to speak). Russian leaders have, at times, spoken of applying for EU membership, but the idea has not been taken seriously on either side.

Europe is most prominently an economic trade zone, the EU, a common market which includes some exceptions in services, and which has been extended to include some non-EU members of the grouping that began existence as the , namely Liechtenstein, Iceland, Norway (and Croatia, pending ratification of its EU membership).

The EFTA might, in the not distant future, include a Britain that, thanks to David Cameron, has renounced its EU membership (or an England at least, if Scotland declares independence, and depending upon Scotland's choice of European identities). Prime Minister Cameron has promised his electorate a referendum on British EU membership at some point in his present term of office, which at the latest will end in 2015.

But what is Europe's political identity? An association tied by several treaties covering elements of national union or ceded sovereignty. It has a common parliament and a limited common executive and civil service (the Commission), controlled by the heads of the governments making up the EU, as well as commissioners dealing with the EU's common foreign relations and common defense. Neither of them possesses powers that diminish the sovereign foreign and defense powers of the EU's individual members.

This explains why there is no "Europe" able to act in external matters and international political affairs in the manner of a single nation. Everything depends upon consultation, compromise and consensus. This is why Europe has never had a foreign policy wholly independent of the United States, and the United States has always functioned (as Richard Holbrooke, the late American diplomat, once put it -- to the fury of some Europeans) as a European power -- if not the European power. Practically speaking, it has been until now, and continues to be, the most important European power. This undoubtedly will change in the foreseeable (although possibly remote) future, with unforeseeable, and possibly serious, consequences for all concerned. But that is another story.

The fecklessness (if objectively assessed) of the EU in its efforts to become a major European political power and actor is evident in its effort to make Turkey a member. Turkey would have been the second most populous member of the EU (nearly 80 million people, the total increasing; while Germany's population is presently 82 million and diminishing). Turkey would have had the second largest national representation in the European parliament, presumably nearly all Muslim. Its history is of military or, recently, quasi-democratic governments, and it presently experiences serious political disorder. Its membership could have paralyzed the EU.

The EU's effort to build a political association with Ukraine, whose history is closely linked with Poland, Lithuania and western Christianity, in order eventually to make Ukraine an EU member, has been extremely reckless. It required rupturing Ukraine's medieval and modern association with Russia, whose people are held to have been Christianized by the Greek Byzantine Saints Cyril and Methodius in the ninth century, thereby laying the foundation of Russian civilization. This effort was certain to produce an upheaval in Ukraine and Russia. Ukraine, in its modern form, is historically divided between Central Europe and Russian influences.

It might in the future provide a cultural bridge and means of beneficial mutual influence between Europe and Russia. The attempt to recruit it to the EU and the West (preceded by the rash American effort to make it part of ), was inevitably destined to end in conflict. But no one in Brussels (or Washington) appears to have been aware of this.

"Dispute of Ukraine's Relationship with Russia Rages On"