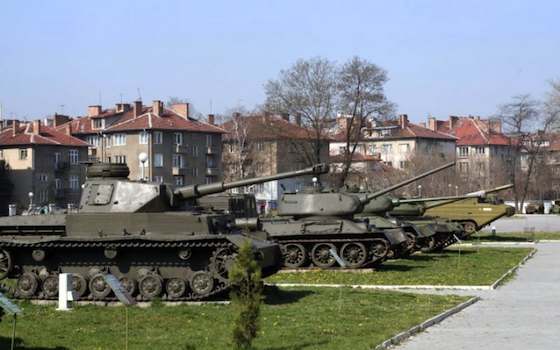 Poor Bulgaria. Once again the Germans are headed her way -- this time armed with nothing more than a change of currency and the policies of austerity that go along with it.

The military museum in Bulgaria's sprawling capital city consists of a tiny building and a huge outdoor display of weapons that look as if they had been wheeled in fresh from the battlefields and parked, higgledy piggledy: mountain howitzers that shelled Turks in 1912 rub hubs with Cold War-era Russian artillery. MIGs, dusty and weather beaten, crowd a sinister looking Luna-M "Frog" tactical nuclear missile. Two old enemies, a sleek German Mark IV Panzer and its dumpy but more lethal adversary, a Russian T-34, squat shoulder to shoulder.

Poor Bulgaria. The Russians won't be back, but once again the Germans are headed her way—this time armed with nothing more than a change of currency and the policies of austerity that go along with it. The devastation those will inflict, however, is likely to be considerable.

Bulgaria is preparing to jettison its own currency, the lev, and adopt the euro, although the country has dragged its heels about actually making the switch. With good reason.

Currency control is a practical and commonsense way for countries to deal with interest rates, debt, and inflation, as well as to stimulate economic activity. The U.S. Federal Reserve constantly manipulates the dollar to accomplish these goals.

But the euro is controlled by the European Central Bank based in Frankfort, Germany. Because Germany has the biggest economy in the EU and is at the center of a "core" of wealthy nations that also use the euro—France, Austria, and the Netherlands—Berlin largely calls the shots. That has translated into a tight-fisted control of the money supply, an aversion to economic stimulation, and years of forced austerity for countries trying to recover from the 2007 economic crisis sparked by the United States.

The result, according to Martin Wolf of the Financial Times, is that in addition to Mercedes and BMWs, Germany "exports bankruptcy and unemployment."

Led by German Chancellor Angela Merkel and Conservative British Prime Minister David Cameron—Britain retains its own currency, but has been an enthusiastic supporter of Germany and has applied austerity to its own economy—the strategy has been an unmitigated disaster.

While supporters of this "slash and cut" approach to reviving the European economy claim their policies are a success—German Finance Minister Wolfgang Schauble says the world should "rejoice" at recent economic figures, and British Chancellor of the Exchequer George Osborne crows that critics of the strategy have been proven wrong—figures show a very different picture.

The overall EU jobless rate is 12 percent, although that figure is misleading because it varies so much by country, region, and cohort. Unemployment is 12 percent in Italy, 13.8 percent in Ireland, 16.5 percent in Portugal, 26.3 percent in Spain, and 27.9 percent in Greece. And even these figures make the jobless rate look sunnier than it is. Unemployment among Greek youth is 60 percent, and areas of southern Spain post numbers in excess of 70 percent. Indeed, an entire generation of young people across the continent is being cut out of the economic pie.

"It is true that unemployment figures have improved in recent times, but it is equally true that unemployment is at such a high level that any marginal improvement is irrelevant," a Madrid-based economist for Exane BNP Paribas told the Financial Times. "Many people are no longer actively looking for jobs, and long term unemployment already affects more than 50 percent of the total unemployed population."

Figures also show that EU growth rates are essentially dead in the water, which means that it will be years before there is any real fall in the joblessness rate. EU gross domestic product is 3 percent below pre-crisis levels, and those figures go sharply south for the distressed six: down 7.5 percent for Spain, 7.6 percent for Portugal, 8.4 percent for Ireland, 8.8 percent for Italy, and 23.4 percent for Greece.

It is true that growth in Britain is up 2.2 percent, but that figure is over three years and remains 3.3 percent below pre-crisis levels. Moreover, the Office of Budget Responsibility projected back in 2010 that the economy would expand by 8.2 percent by 2013. Economists Oscar Jorda and Alan Taylor of the University of California at Davis estimate that austerity probably knocked about 3 percent off the British growth rate.

The EU is turning into a house divided. There's a wealthy core where unemployment rates are relatively low—Austria and Germany have the lowest joblessness rates in the EU at 5.2 and 5.3 percent, respectively—while countries at the periphery turn into low-wage, high-unemployment labor reservoirs. If "core" workers grumble at stagnant wages and reduced benefits, there are always Spaniards, Italians, Greeks, and Portuguese willing to take their places.

What the distressed countries really need is a serious stimulus program to jump-start their economies by putting people back to work. But that is not something they are likely to get, especially given the outcome of the recent German elections, where Merkel's Christian Democrats and her allies in the Bavarian Christian Social Union retained power. Merkel told a rally in Berlin, "Our European course will not change," and the Greek newspaper Ta Nea glumly called it a victory for the "Queen of austerity."

In reality, the German election was less a vote for more austerity than a reflection of domestic concerns about stability. And in any case, Merkel's opponents actually won the election. Merkel and her allies control 311 seats in the parliament, but the Green Party, Social Democratic Party, and Left Party together won 329 seats. While the Greens and Social Democrats have acquiesced to some austerity policies, they are not as hardline as Merkel. If they could overcome their hostility to the Left Party—which took 64 seats, one more than the Greens—the center-left could form a government that could potentially alter the economic chemistry of the EU.

In the meantime, Bulgaria awaits its fate with an odd combination of clear-sightedness and illusion.

Surveys show that most people think the euro will cut their living standards and have a negative impact on the economy. Bulgaria is already in difficult straits, partly because when it joined the EU it lost its biggest customer, Russia, partly because it is small, and partly because it still suffers from a post-communist hangover. It is the poorest country in the EU.

Like many former communist bloc countries, when Bulgaria broke loose from Soviet domination in 1990, it went on a privatization tear that ended up largely gutting its industrial and agricultural base. It is now trying to claw its way back by reviving agriculture and building up the tourist industry.

But tourism is volatile, and Bulgaria appears to have over expanded, much as Spain did. The Black Sea coast south of Burgas is lined with high rises and gated communities, but many of them are dark when the sun goes down. There is a distinct feel of a real estate bubble.

The illusion is that Bulgarians support EU membership because they think it means the Union will bail them out of any future trouble, as it did for Greece, Spain, Portugal, and Ireland. In fact, the Union did not bail out any of those countries. It rescued failed banks and financial institutions that had recklessly gambled away their assets on real estate speculations—with "loans" that required huge cutbacks in social services and massive layoffs of public workers.

When the bubble popped, it was taxpayers in those countries who ended up picking up the bill, including those incurred by "core" French, German, Dutch, Austrian, and British banks.

Bulgaria is unlikely to play a pivotal role in the austerity battles to come, though conquerors have underestimated her in the past. The question is, will the country resign itself to second-tier status in the EU, or will Bulgarians join with increasing numbers of Greeks, Spaniards, and Portuguese who are saying "enough"?

A good start toward turning things around would be to take up a call by Greece's Syriza Party for a European debt summit similar to the 1953 London Debt Agreement. That pact allowed Germany to recover from World War II by cutting its debt by 50 percent and spreading payments out over 30 years.

The Mark IV Panzers are museum pieces. These days the power to wreak destruction doesn't depend on commanding armored divisions. All one needs to overrun Europe now are currency control, banks, and obsequious politicians.