Britain: What Is Sovereignty? 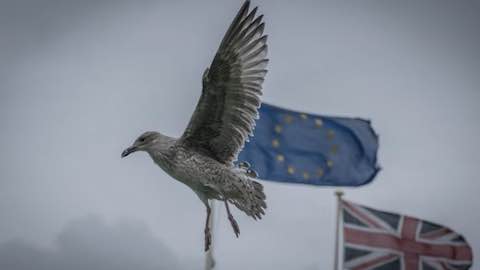 As Britain embarks to find a new place in the world and as other powers vow to defend their sovereignty, the world seems even more confused and the debate remains open.

The world stood in awe watching Kurds and Catalans voting to establish new, sovereign states. As the conflict in Iraq flares up again and as Catalonia poses a new challenge to Spain and Europe, sovereignty strikes back as a popular idea. Yet, what sovereignty really is remains a mystery. A mystery that made sovereignty one of the most googled words in the UK as Brexit was taking place. So, what exactly is sovereignty? Is it taking back control? Is it legitimacy? Is it a privilege or a responsibility? How has it shaped international relations?

The Birth of State Sovereignty

In the history of sovereignty, especially in reference to the UK, King Henry VIII is one of the most prominent figures. This is because of his decision to denounce the Pope’s authority and establish the Church of England in 1534. The trigger for this was the wish of the King to divorce his first wife, Catherine of Aragon and marry Anne Boleyn, something that the Pope did not allow. While, notoriously, the King moved to have four more wives, his decision is a focal point in the history of sovereignty. By asking the parliament to help him with claiming back authority from the Pope, King Henry not only set off the process of English reformation, but eventually added to the power of the parliament. In the following decades, this will eventually lead to the parliament challenging the Monarchs themselves and arising as sovereign, something that Henry probably did not foresee (see also Loades 2009).

But Henry's break from Rome is also important because, for the first time, sovereignty was linked to a set territory and population in England. Similar trends in the way people were organising themselves were also taking places throughout Europe. In this context, the 1648 Peace of Westphalia, which ended the thirty-year war between European powers, became the basis of the international system that we still have today, which is based on states that have more or less clear borders in compact territories and populations, and which respect each other's independence (see for example Philpott 2001).

(De) Colonisation and Sovereignty as Privilege

A couple of centuries after the Peace of Westphalia, sovereignty and the way it was applied in international relations was to be redefined again. Colonialism extended the sovereignty of imperial powers around the globe and over a range of colonies. It was largely based on assumptions that the coloniser was superior to the colonised, including in their ability to organise politics (see also Jackson 2007). In this regard, sovereignty during this era was a privilege, as people in the colonies were not regarded worthy of ruling themselves.

But this was to change again. Since colonised peoples were exposed to sovereignty ideas they eventually claimed self-determination for themselves. An array of developments led to a wave of anticolonial movements and soon former colonies enjoyed a newfound sovereignty. This resulted in a peak in the growth of membership of UN, as the newly independent nations joined the club of states. Unlike earlier periods where the focus was on internal sovereignty, i.e. the ability of a ruler to exercise control over a territory and a population, this era sees a rise in the importance of external sovereignty, i.e. international recognition. What seems to matter more now is not whether an entity looks like a state, which many former colonies did not, but whether it is recognised as such. As a result, many former colonies were recognised as states despite being unable to govern and impose control on important chunks of territory within borders. The process of decolonisation sometimes resulted in so-called ‘failed' states: states which, despite being recognised as independent, suffer internally from ineffective governments. As a result, today, there is confusion, if not disagreement, about what is more important, internal or external sovereignty. Is, for example the largely recognised state of Palestine, with its fragmented and largely uncontrolled territory more of a state than Taiwan, which is recognised by a handful of states but it is one of the world's leading economies?

Brexit: A Rebound of Sovereignty?

But while decolonisation expanded the idea of sovereignty, the state will soon be challenged because of the increasing interdependence of the past few decades. Indeed, more recently, there has been a lot of discussion on the erosion of sovereignty, as a result of an increasingly interdependent world. In Europe for example, some have concluded that the sovereignty of the state is undermined, or at least redefined, as a result of European integration and of shifting the locus of decision-making from national capitals to Brussels. Those ideas dominated the debate also in the aftermath of the financial crisis. Politicians who defend sovereignty and question the benefits of globalisation have seen a lot of success throughout the world. Sovereignty was the most often used word by President Trump in his address to the UN in September 2017. In Europe, the crisis has seen rising scepticism towards the EU.

In the UK for example, the concept of sovereignty was invoked a lot during the EU referendum debate by people from all walks of life. Scepticism towards globalisation and the erosion of sovereignty was evident in campaign calls to curt migration and to repatriate powers from Brussels to Westminster. Indeed, sovereignty also seems important for the outcome of the referendum. Almost half of those who voted in favour of Brexit said it was because ‘decisions about the UK should be taken in the UK' showing that the idea of Parliamentary Sovereignty, which ties to the Parliament's law-making powers, was very relevant in the vote.

This is the type of sovereignty that the British Prime Minister Theresa May has also spoken about, for example in her first Brexit speech, where she vowed to pursue a Brexit that would allow the country to do ‘what independent, sovereign countries do, ‘decide for ourselves how we control immigration. And… be free to pass our own laws'. As a modern Henry VIII, May understood sovereignty as control and sought to bring it back from Brussels to the UK. But others, such as prominent Brexiteer Nigel Farage, have suggested that ‘sovereignty does not lie with Parliament but with the people', highlighting a more ‘popular' type of sovereignty. These different understandings of sovereignty became all too obvious in the controversial court case of R (Miller) v Secretary of State for Exiting the EU, which had one simple yet complex question at its heart: can the government act on the result of the 2016 referendum without consulting the Commons? In other words, who is sovereign, the people or the parliament?

So, as Britain embarks to find a new place in the world and as other powers in the world vow to defend their own sovereignty, the world seems even more confused, if not divided, than ever on the issue. And the debate remains open. Do Catalans or Kurds have a right to state sovereignty? Who is to claim this right? And who is to grant it? Is sovereignty given or taken? The answers to these questions of sovereignty are not straightforward and remain at the heart of heated debates in international relations. And while people might seek to try defining sovereignty, history tells us that such as abstract idea remains in the hands of politicians, who shape or even manipulate its meaning. Scholars of international relations should remain critical of sovereignty and those who try interpreting it.

Europe: "Britain: What Is Sovereignty?"