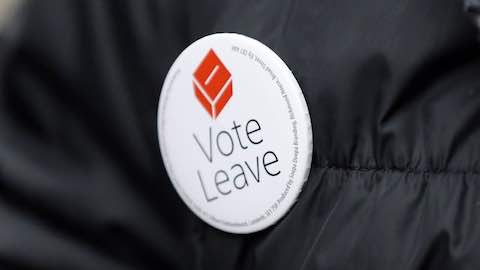 Though 52 percent of voters favored Brexit, socioeconomics divided the Remain and Leave camps

After months of contentious debate that polarized everyone from Michael Caine to David Beckham, the U.K. officially opted to leave the European Union. Of the record-breaking 33 million voters who turned out across Britain in last Thursday's referendum, 52 percent favored the so-called Brexit. Overall voter turnout hit 72 percent, another high mark for recent British elections.

Aftershocks from the decision have reverberated from Parliament to Wall Street. British Prime Minister David Cameron, announced he would resign his post, which he has held since 2010. Cameron openly supported the "Remain" campaign, arguing that Britain should stay in the EU.

The British pound also took a sharp hit after the vote made the U.K.'s economic future more uncertain. As the InsideGov visualization shows, the pound-to-dollar exchange rate plummeted from $1.4877 to $1.365 over the course of 24 hours. The pound continued its fall Monday morning, opening at $1.316, its lowest mark since 1985.

The rationale for the "Leave" campaign, which supported Brexit, hinged on a handful of key issues. Former London mayor Boris Johnson and others argued the U.K.'s membership in the EU encroached on British sovereignty and stifled potential trade opportunities. The U.K.'s all-time high immigration rate also frequently came up in discussions of Brexit. Many argued leaving the EU would give Britain complete control over its borders, and thus the ability to decide for itself how to address Europe's migrant crisis.

Support for the departure was not evenly distributed across the U.K.'s nine regions. As the InsideGov visualization below shows, the West Midlands region, which includes the large industrial center of Birmingham, voted the most strongly in favor of Brexit, with over 59 percent supporting it. London, however, was the only region to favor "Remain," with nearly 60 percent voting to stay. London's large population contributed to the close margins in the overall referendum.

Regional voting patterns seemed to coincide with demographic factors such as education and income. Support for staying in the EU was strongest in London and South East, where people with secondary degrees make up 51 percent and 41 percent of the population, respectively. In regions like East Midlands and West Midlands, where the "Leave" vote was strongest, people with upper-level diplomas make up only 31 percent and 30 percent of the population, respectively.

A similar trend appears when looking at household income. In London and South East, where "Remain" received the most support, household income per capita stands at £22,516 and £19,898, respectively. In the regions with the lowest per capita household income, North East (£14,927) and Yorkshire and The Humber (£15,252), "Remain" only received about 42 percent support.

Looking at the U.K. as a whole, there's an even more interesting vote disparity. As the visualization shows, while England and Wales voted in favor of Brexit, both Northern Ireland and Scotland opted to stay in the EU.

The differing opinions among the members of the U.K. have raised questions about whether Scotland or Northern Ireland will hold referendums to decide on their own independence. In 2014, Scotland held a referendum to determine whether it would separate from the U.K. The country voted to remain 62 percent to 38 percent.