Autocracy - The Trouble with Hungary 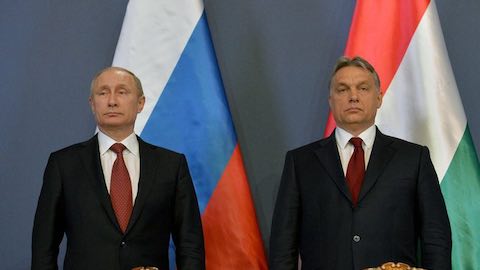 Hungary clearly belongs in Europe, but it does not have to belong in the EU if its values do not align with those of its fellow member states.

The European Parliament's declaration that Hungary is no longer formally a democracy should come as no surprise to those who have witnessed Budapest's democratic backsliding. According to the European Parliament's report, Hungary should be classified as a 'hybrid regime of electoral autocracy', and a state where European values are consistently under threat. In a similar vein, the EU has proposed suspending 7.5 billion euros in funding to Hungary over corruption and democratic backsliding concerns. Hungary is increasingly becoming a pariah in the EU and more closely aligned with Russia, Turkey, and far-right figures in the US than with its fellow member states.

The case of Hungary makes clear that EU membership does not guarantee democracy despite candidates for EU accession having to go through a rigorous process of developing democratic credentials known as the Copenhagen Criteria. Ukraine, Moldova, and other Balkan states with corruption concerns and influence from outside powers like Russia are currently formal candidates for EU membership. As such, the censure of Hungary is an alarming wake-up call for EU enlargement and for the spread of its own values going forward.

Viktor Orban's Hungary, as well as Poland under the Law and Justice Party, are states where the role of the media, judiciary, and academia are increasingly politicised, and the rights of migrants, the LGBTQ community, and women often rolled back. Early in the COVID-19 pandemic, Orban used a state of emergency to help consolidate his power, and Hungary's close alliance with Russia, including its willingness to continue to pay for Russian gas in roubles, has soured relations with the rest of the EU.

Under Orban, Hungary has gained tremendously from its position in the EU and Budapest has turned into a kingmaker for populist movements not just across the continent but in the United States. Orban has become more of an international symbol than a European one, as he is fighting less for Europe and more against the perceived tide of a corrosive, cosmopolitan liberalism that has global effects. While this threatens Orban's definition of European values, it also threatens a traditional, white Christian way of life that is just as palpable with some voting blocs in American swing states as it is in the heart of Europe.

Hungary clearly belongs in Europe, but it does not have to belong in the EU if its values do not align with those of its fellow member states. After living under communism for decades, Hungary chose to be a part of an enlarged, democratic EU in order to prosper alongside its peers on the continent. However, membership in the EU is a privilege, not a right, just as the common European experience of borderless travel and freedom of movement is the privileged result of long-warring states choosing to pool their sovereignty and fight for their common future. Orban doesn't believe in fighting for the common future of Europe as envisioned in the EU's many treaties, and no alliance is too unreasonable for him should it further serve his ideological agenda. Orban has more to gain by aligning with neo-imperial autocrats like Putin and Erdogan on Europe's periphery than with liberal reformers and even populist Eurosceptics in neighbouring EU states.

For Orban, the challenge will be in choosing whether his mission is too big for Europe, or whether he still needs Europe and the trappings of its institutions and alliances to forge ahead. As the year goes on, events outside of Hungary in Ukraine, Russia, and Italy may do more to shape Orban's strategy than anything that happens domestically. Even if Italy gains a far-right leader in its elections on 25 September, a government under Giorgia Meloni is expected to take a hard stance on Russia and work with NATO and the EU. Further Ukrainian gains in its counteroffensive may cause France and Germany to increase military aid, and Italy under a far-right government may continue to support sanctions against Russia and work to lessen its dependence on Russian gas. Should this occur, Hungary will have little leverage to continue its pro-Kremlin course and Orban would likely be forced to realistically consider the viability of maintaining such close ties with Moscow.

Autocrats and illiberal figures like Orban and Putin still care about their image and how they are perceived in the world. Further isolating Orban in Europe might only strengthen his appeal abroad and as a figurehead for grievance-based populist-nationalist movements. However, a Ukrainian victory would be a major symbolic boost for democracy in the global struggle against authoritarianism. That victory will in large part be because of the EU and the importance of its mission to those in Ukraine who are fighting to distance themselves from Russia in order to build a more prosperous future.

If the EU, and thus democracy, continues to have the upper hand, Budapest will be hard pressed not to find a reason to fall in line. Hungary's isolation may be necessary in the short-term, but Budapest should not be ostracised from contributing in good faith to European issues. There are many Hungarian citizens who don't subscribe to Orban's ideology but who are unable to latch onto effective political or media outlets in which to air their concerns. Just as Ukraine progresses on the path to EU membership, Brussels would be wise to also look to Hungary to ensure its civil society can effectively transition to the post-Orban era. Support for democrats in Hungary will be important to maintain, while also acknowledging the pernicious threat of illiberal figures who are willing to hijack their agenda.

Brussels will likely develop a strong backbone should events in Ukraine continue on their present course, prompting a reckoning for Orban and his supporters over which European values are really worth fighting for.

Alexander Brotman is a political risk and intelligence analyst with a focus on EU politics and security developments. He has written for Global Risk Insights and Foreign Brief, two political risk publications, and has provided direct research support to a leading scholar of Russia and Eurasia in Washington. Alexander received his MSc. in International Relations from The University of Edinburgh. He is currently based in Washington DC.